Book Tour for A Rebel at Pennington's by Rachel Brimble (GIVEAWAY)

A young lady with modern ideas finds herself attracted to a young man ashamed by his past in this historical romance that balances a burgeoning romance with real historical events of the time.  Keep reading to get a tempting taste of A Rebel at Pennington's by Rachel Brimble, and discover even more about this book by visiting the other sites hosting this tour, then add it to your bookshelf.  You’ll also hear from the author as she talks about blending real historical events with fictional romances to satisfy readers.  In honor of this second installment in the Pennington’s series make sure to fill out the form below for the chance to win a $20 bookstore GC too!

QUESTION FROM THE SCARF PRINCESS:  How do you blend real historical events with romance to satisfy readers?
ANSWER FROM MS. BRIMBLE:  I absolutely love this question because it’s one that I’ve found myself focusing on more than ever with my Pennington’s Department Store series. Before this series, I concentrated more on the romance than actual events.
The reason being is that romance is 1) what I love to write and 2) emotions are felt the same today as they have in the any time period in the past. We are humans, after all. Sadness, joy, love, hate, disappointment…all people feel these things in the same way whether it’s 1710, 1910 or 2010.
Writing emotion and romance is what I love first and foremost but, with the Pennington’s series, I wanted to explore women’s issues of the early 20th century. In order to do that, I knew I had to focus on an issue for each book and thoroughly research it.
For the first book in the series, The Mistress of Pennington’s (both books can be read stand-alone), I focused on women in business and for this I started with the department stores of the 1800s. I research how they were founded, who worked there, the position of women in the workplace, the unusual positions of women in the workplace and, most of all, the roles of shopgirls and their opportunities.
For book 2, A Rebel At Pennington’s, I wanted to focus on women’s suffrage – I cannot stress enough how much I enjoyed delving deeper into a subject that has fascinated and inspired me since I was in my teens. By adulthood, most of us have heard of the famous names in the fight for the vote. Names like Emmeline Pankhurst, Emily Wilding Davison and Millicent Fawcett, but it wasn’t these women that inspired my heroine, Esther Stanbury.
It was lesser known suffragists (peaceful) and their contributions to the Cause that ensure Esther’s character was as authentic and relatable as possible. Women like Catherine Marshall who led peaceful campaigning by submitting articles to the press, setting up stalls and handing out awareness literature. Women like Nina Boyle who was one of the pioneer’s in the women’s police service and the first woman to be nominated to stand for election to the House of Commons. These women were phenomenal in their achievements, yet completely unknown to me.
So how many more women were there who played an integral part in a fight that lasted decades?
Well, far too many to name here, but I was honoured to research and learn about their struggles. In the book, I tackle Esther being torn between remain a suffragist or joining the suffragettes. I wanted to address this because I am sure there were women who ‘jumped sides’ to either camp whether due to frustration and resorting to militancy, or women who came to abhor the violence and turned to peaceful campaigning.
The other big event I have used as a backdrop in A Rebel At Pennington’s is the coronation of King-Emperor George V. This iconic event meant I could bring some real British pomp and ceremony to the book and add a splash of colour to a story that covers a tough issue…not to mention the struggle to find everlasting love! 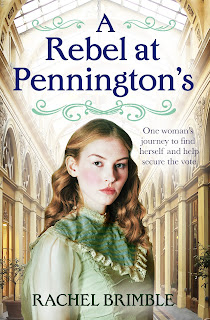 1911 Bath. Banished from her ancestral home, passionate suffrage campaigner, Esther Stanbury works as a window dresser in Pennington's Department Store. She has hopes and dreams for women's progression and will do anything to help secure the vote.

Owner of the prestigious Phoenix Hotel, Lawrence Culford has what most would view as a successful life. But Lawrence is harbouring shame, resentment and an anger that threatens his future happiness.
When Esther and Lawrence meet their mutual understanding of life's challenges unites them and they are drawn to the possibility of a life of love that neither thought existed.
With the Coronation of King-Emperor George V looming, the atmosphere in Bath is building to fever pitch, as is the suffragists' determination to secure the vote.
Will Esther's rebellious nature lead her to ruin or can they overcome their pasts and look to build a future together?

She looked towards Lawrence.
He softly studied her, and her cheeks warmed. The way he looked at her inferred he was equally moved by Mrs Hadley’s sadness. Esther looked away. He, too, was widowed. Had he and his wife once shared the same love that Grace Hadley spoke of?
Shamed by the jolt of jealousy that shot through her, Esther walked to stand behind a pillar that blocked Lawrence’s sight of her but gave her full view of Mrs Hadley. A familiar sense of unworthiness knotted Esther’s stomach. If Lawrence understood Grace Hadley’s words and sorrow, then, he too, must have known deep and meaningful love.
She would never be enough to compete with such a ghost. Would never be enough to be with a man who bore such longing for a person he’d lost. If she listened to her body and how it so treacherously reacted to Lawrence, her attraction to him would only end badly when the moment came that she’d inevitably held something of herself back.
She could not forgo everything she had built. Somehow, she had to find the strength to fight the temptation of Lawrence’s gaze and quash the yearning to see him again…to see his children again. The emotions he’d evoked in her proved her capable of feeling. Something she had doubted for so very long. Her meeting him had been worth that, at least.

Rachel lives with her husband and their two daughters in a small town near Bath in the UK. Since 2007, she has had several novels published by small US presses, eight books published by Harlequin Superromance (Templeton Cove Stories) and four Victorian romances with eKensington/Lyrical.
In January 2018, she signed a four-book deal with Aria Fiction for a new Edwardian series set in Bath’s finest department store. The first book, The Mistress of Pennington’s released July 2018 with book two coming February 2019.
Rachel is a member of the Romantic Novelists Association and Romance Writers of America and has thousands of social media followers from all over the world. To sign up for her quarterly and new release newsletter, click HERE to go to her website.