Book Release Blitz for The Machine by Stephanie Julian (REVIEW)

A sweet and sexy hockey player just recovering from an injury on the ice finds himself attracted to a woman still trying to get her life back from a near deadly accident and being left at the altar in this delightful hockey-fueled romance.  Keep reading to get a tempting taste of The Machine by Stephanie Julian, along with my impressions of it, then add this seventh installment in the Redtails Hockey series to your bookshelf too! 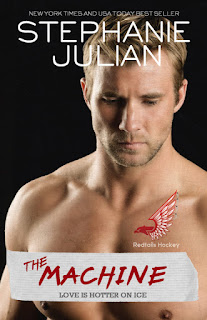 He’s cool as ice and hot AF.
Jake Mozik has fought his way back from a possible career-ending injury and has returned to the Redtails focused and ready to reclaim his former glory as half of the best defensive duo in the league. But his attraction to the fierce Faith is unexpected and distracting.
Faith doesn’t usually fall for overly confident, uber sexy jocks. But when she does, apparently she falls pretty damn hard. Jake is so not her type. Or so she thinks. Until he shows up to volunteer at the alternative school where she works and she sees a different side of the normally cocky athlete. He’s kind and patient and — Damn it, she is not falling for this guy. She’s rebuilding her life after a near-fatal accident and there’s no room for a man.
Jake is determined to make room in Faith’s life. And once he sets his mind on something, he doesn’t let go until he gets what he wants. And he wants it all... 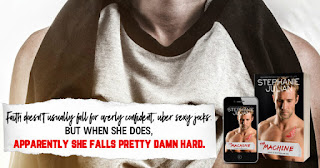 From the first page to the last readers will find themselves charmed by this romance of two strong-willed people trying to overcome past injuries to their bodies and souls to find a HEA.  In a tale of preconceived notions, low self-esteem, and putting the past behind you to make a future readers willl be quickly captivated by the no-nonsense hero and the flawed heroine who longs to find a man worthy of her trust.

Jakub (Jake) Mozik has always appeared a bit standoffish, a bit of a jerk, a man who’s always in control...at least that’s how Faith always saw him.  When an injury on the ice leads to a lengthy period of recovery though Faith starts to see him in a whole different light that has these acquaintances becoming something more.  Jake was the highlight of this story for me.  He at first WAS a jerk, a man devoted only to his career as success means bringing his mother and disabled brother to the States for a better life.  He was “The Machine” as he was focused on hockey, and recovery, to the exclusion of living a full and happy life. Making connections, finding love, were only distractions and when it came to women he made sure they knew that he only wanted them for one night.  A moment of compassion towards Faith is the start of something bigger as he can no longer ignore how much she’s coming to mean to him in his slow and steady journey to win her trust.  Jake’s definitely no player as he means what he says and says what he means.  He’s forthright and doesn’t sugarcoat things which endeared him to me as did his vividly depicted Czech accent.  He was charming with a heart of gold and the more we learn about him the sexier he became.

Faith Donovan’s a strong-willed heroine who refused to accept the dire diagnosis of permanent paralysis from a recent accident.  She’s come a long way in the recovery of her body, defying the odds to be left with only a limp and occasional pain, but when it comes to her heart she still has a long way to go.  Being left at the altar during her recovery was a blow to her self-esteem at a time when she needed unconditional support and it’s left her questioning everyone and everything.  When she first sees Jake she’s instantly attracted to him and in awe of his strength, though she also thinks he’s a jerk for being so quiet and controlled.  Seeing him at therapy has her discovering another side to him that has her wanting to take a chance if she can just work past her fears and doubts of not being good enough.  Faith’s a likable heroine with an equally likable group of girlfriends who are there whenever a venting session is needed.  For Faith, there’s a lot weighing on her lately with her attraction to Jake and difficulties at her job at a school for the disabled.  Add in her self-doubts and you end up with a heroine whose journey to HEA will be a rocky one as she’s quick to assume the worse when it comes to Jake’s feelings for her.

On a whole I found this an entertaining journey to HEA, a nicely-balanced tale of action on the ice and off.  Faith’s an admirable heroine in many ways, and though I was sometimes frustrated by her negative perceptions, I could certainly understand her self-doubts after the pain her ex brought her.  When it comes to Jake though he’s near-perfect!  He’s honest and willing to do whatever it takes to win Faith’s heart as he’s just been waiting for the right woman. Together they’re an endearing couple with scorching encounters and heartwarming and flirty banter.  Ms. Julian gave ample time for them to get to know each other, time that put their hearts and souls on the line.  Learning more about them as the story progressed had me even more invested in their HEA and I was rooting for them every step of the way.  Surrounding this appealing main couple was an equally likable cast of secondary characters, some whose stories have been already told to new characters that left their mark.  From Faith’s girlfriends to Jake’s teammates there’s lots of support for the main couple, lots of friendships that made this story even stronger.  By the turn of the final page I’m left satisfied and ready for wherever Ms. Julian takes us next. 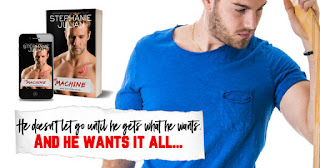 Stephanie Julian is a New York Times and USA Today best seller who writes sophisticated, sultry romance for adventurous readers.
Her books include sexy heroes (sometimes two!), smart heroines and emotionally engaging love stories. Her series include the best-selling Salon Games, Indecent and Magical Seduction.
Stephanie is a slow runner, a reluctant cook, a lover of all things Joss, JJ and Disney. She's happily married to a Springsteen fanatic and is the mother of two sons who introduced her to the joys of Slipknot, Warped Tour and never-ending headaches.