Book Spotlight on Every Last Breath by Juno Rushdan (GIVEAWAY)

Readers will be kept on the edge of their seats with this sensual and suspenseful contemporary romance of past lovers working together to save lives from a worldwide poison.  Keep reading to get a tempting taste of Every Last Breath by Juno Rushdan, then start counting down the days until this book releases on April 30th.  In honor of this first installment in The Final Hour series make sure to fill out the form below for the chance to win 1 of 3 copies of this book too! 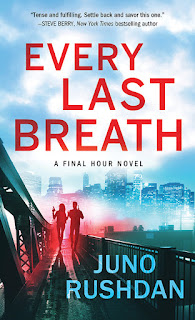 48 hours
2 covert operatives
1 chance to get it right
Maddox Kinkade is an expert at managing the impossible. Tasked with neutralizing a lethal bioweapon, she turns to the one person capable of helping her stop the threat of pandemic in time: the love of her life, back from the dead and mad as hell at her supposed betrayal. Recruiting Cole to save millions of lives may be harder than resisting the attraction still burning between them, but Maddox will do whatever it takes...even if it destroys her.
When Maddox crashes back into Cole Matthews' life, he wants to fight back. He wants to hate her. But the crisis is too strong to ignore, and soon the two former lovers find themselves working side-by-side in a breakneck race to stop a world-class killer with a secret that could end everything.
The clock is ticking. 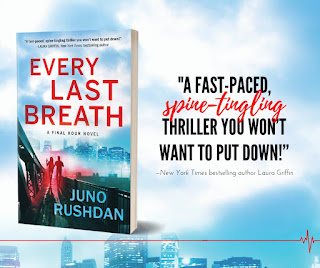 DISCOVER MORE ABOUT MS. RUSHDAN AND HER BOOKS here.