A marriage of convenience that could’ve been more soon becomes all too real after a year apart as a couple combines forces to save the theatre they gave everything to in this sizzling contemporary romance.  Keep reading to get a tempting taste of Vivi’s Leading Man by Emily Mims and learn even more about this series starter by visiting the other sites hosting this tour.  In honor of this first installment in the Durango Street Theatre series make sure to fill out the form below for the chance to win digital copies of the first two books in The Smokey Blues series too! 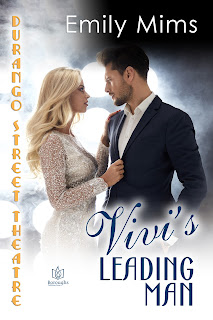 EXES AND OHS
The marriage was one of convenience. She had status and he had money. But... there was something there, and both of them felt it. After three years of him working long hours and her spending too much time at the Durango Street Theatre, Miguel Abonce and Vivienne Heiser called it quits. One year later, they are forced to work together to save or sell the theater. In the process they discover things they never knew about each other and they learn there's more between them than burning up the sheets. They might really love each other after all.

He should pull away. Instead, tightened his hold while he plundered her sweetness. They clung together for long moments, their moans the only sound in his ears. When he pulled back, he looked into her eyes, dimly lit by the streetlights and a waxing moon in the night sky. “Well,” he murmured softly as he took in her swollen lips and her glazed expression. “Was it as good as it used to be?”
His question seemed to snap her out of her trance. “Yep. Best empty, meaningless kiss I’ve ever had.” Her words were biting, but her expression screamed sad. She pulled back and he let her go, even though every muscle in his body was dying to hold onto her.
She got into the Beamer and in typical Vivienne fashion pulled out of the parking lot a little too fast. He watched her go, his fingers pressed to his lips. It stung more than he cared to admit that she thought what he craved was empty and meaningless.
It had never felt that way to him.

The author of over thirty romance novels, Emily Mims combined her writing career with a career in public education until leaving the classroom to write full time. The mother of two sons, she and her husband split their time between central Texas, eastern Tennessee, and Georgia visiting their kids and grandchildren. For relaxation Emily plays the piano, organ, dulcimer, and ukulele for two different performing groups, and even sings a little. She says, “I love to write romances because I believe in them. Romance happened to me and it can happen to any woman—if she’ll just let it.”