A woman longing for adventure leaves her past behind only to find herself in dire need of help from a man trying to atone for past wrongs in this tale of opposites attracting.  Keep reading to get a tempting taste of Logan’s Lady by Rosanne Bittner, then add it to your reading list.  In honor of this historical tale make sure to fill out the form below for the chance to win 1 of 3 copies of this book too! 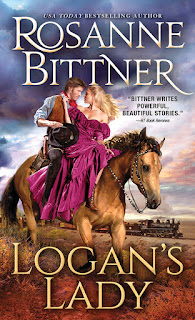 Two worlds in conflict
Two hearts intertwined
One love worth fighting for
Wealthy Englishwoman Lady Elizabeth Baylor longs for adventure. She leaves for America full of hope, only to lose everything to a villain hiding treachery behind his smile. Lost in this strange and lawless land, Elizabeth vows to track down the man who did her wrong...but she can't do it alone. What she needs is someone hardened by the west and unflinching toward its dangers: notorious bounty hunter Logan Best.
Ill-mannered and seemingly ruthless, Logan exorcises his dark past by throwing himself into his vengeful profession—hunting wanted men. There's nothing about the pampered Englishwoman that should call to him, and yet as their adventure takes them across the wild and treacherous west, he realizes he'll do anything to keep her safe...and defend his Lady to his final breath. 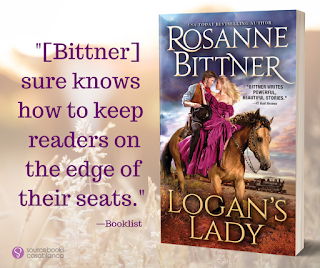 USA Today bestseller and award-winning novelist Rosanne Bittner is known as the “Queen of Western Historical Romance” for her epic love stories and family sagas. Her award-winning, well-researched books span 1800’s America from coast to coast. Devoted readers have described her books as “awesome,” “realistic,” and “unforgettable!” Rosanne and her husband live in southwest Michigan. Visit her at www.rosannebittner.com.