Book Spotlight on Nobody Does It Better by Lauren Blakely (REVIEW)

Set in the world of the Lucky In Love series, the attraction between a woman and her best friend’s brother turns combustible in this charming novella full of colorful characters and fun and flirty banter.  Keep reading to get a tempting taste of Nobody Does It Better by Lauren Blakely, along with my impressions of this contemporary romance, then add this scorching story to your bookshelf! 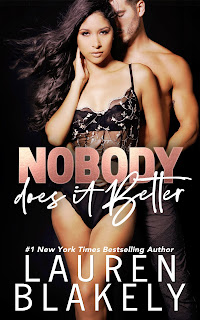 Some women are just forbidden.
Like—off the top of my head—MY SISTER'S LIFE-LONG BEST FRIEND.
Sis has made it patently clear that Vanessa is hands-off, as in keep my ladies’ man paws far away from her clever, go-getter best friend who's ready for the real deal. That should be an easy guideline to follow, except Vanessa is deliciously flirty, easy to talk to, and laughs at my jokes. Translation – my libido has been craving her many, many years. So many that we might have stolen a kiss or two.
Can you say pent-up, crazy, raw desire?
That's exactly what we're both feeling when the storm of the century hits and it's 10 inches of snow with Vanessa and me trapped in a cabin all night long...
The trouble is—Vanessa isn't interested in my playboy ways, and I have one night to convince her that I'm the real deal.

~VANESSA~
I have this fantasy.
The details vary a little. Sometimes I’m in the town diner, other times I’m walking across the square. Most of the time, I’m right here at the one-stop check-in and shoe counter at my bowling alley.
The rest of it goes like this: This guy strides up to me. A rush of tingles spreads down my chest at the sight of his dark hair, his five-o’clock shadow, and his big, burly frame. He drums his fingers on the Formica, lifts a brow, then smiles.
I mean one of those world-class, panty-melting grins that make you swoon.
But the real swoon is what comes next.
He’ll say, “Level with me, Vanessa. I’ve had it bad for you for most of the last two decades, and I’ll wager it’s the same for you. If you feel even one ounce of what I feel, let’s shed this whole ruse and make it official. Go out with me. Go out with me tonight.”
The rest? It’s a montage of oh yeses; hot, wet kisses; and messy lipstick.
That’s the fantasy. My reality on a Wednesday evening in February?
The door opens and a familiar figure strolls in. Even from a distance, he catches my gaze then tips his chin and mouths hey.
My stomach flips, and then it somersaults again when he reaches my post, winks, and asks for a pair of shoes. I know his size, so I hand him the fourteens.
“You know what they say about big shoes?” His deep, raspy voice makes my chest flutter.
I quirk up my lips. “That they’re perfect for clowns?”
And that smile? Oh boy. It spreads into the sexiest grin. “Vanessa Maria Marquez, are you saying I’m a clown?”
I shrug, a little playfully, looking at the shoes in his hands. “If the shoe fits…”
He leans closer. “The other thing they say about big shoes is that it’s hard…”
I wait for him to make a dirty joke, to lob an innuendo. Breath held, I wait for him to say Let’s do this, because hope never dies. And then I wait for the abject guilt of keeping a secret from Perri to subside. Perri, one of my two best friends in the universe, the girl who’s been there for me through every up and down, who attended the theatrical productions I worked on in high school, the friend who rushed to my side in the hospital room when I broke my leg skiing in college, even though she was two hours away, the woman I gave the kick in the pants to last year with her guy when she needed it.
Shaw’s hazel eyes flicker, and I know he’s waiting for me to set up his dirty joke.
My guilt hardens—and my hope deepens, too. The longing for this man beats on.
I return to his “hard” comment. “Hard for what?”
“Hard to find socks.”
I laugh, shake my head, and shoo him off. “Go bowl some strikes, Shaw.”
He gives me a tip of the imaginary hat and heads off to lane twenty, joining a few fellow firemen. I do my damnedest not to stare at his sexy butt, or admire his big frame, or, honestly, even think about him like that.
It’s something I’ve been trying to do for years.
When a group of older ladies—twice my age and totally fabulous—comes in, I shift my focus, setting them up at one of the lanes and serving them wine.
For the next thirty minutes, I don’t even look at lane twenty.
Well, maybe I peek once or twice. 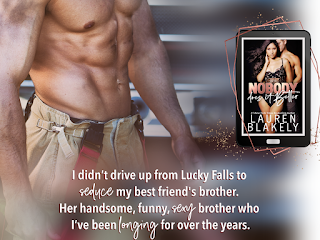 Set in the world of the Lucky In Love series comes this scorching and charming tale of forbidden romance as a young woman who’s been fighting her attraction to her best friend’s brother for years finds herself unable to keep him at arm’s length one snowy night.  In a tale full of witty banter, playful interactions, and a sensual night that changes everything, readers will find this a decadently delightful read that shows that good things come in small packages.  As a novella, nothing feels rushed in this story as ample time was spent with the main couple to fully invest me in their HEA while turning the pages with a smile on my face.

Shaw’s a sexy firefighter full of self-confidence.  He’s funny too and the one to count on for a quick laugh.  He’s also a bit of a player as he’s well-loved by the ladies who haven’t been able to keep him for more than a night. When it comes to his job though that’s the one thing he takes seriously...well, that and his hidden attraction to his sister’s best friend. Since he was a teen he’s longed for Vanessa but was sworn to keeping his hands to himself because his sister doesn’t think he’s good enough for her. Keeping his hands to himself gets harder though the moment he finds out another man will be going out with her as jealousy pushes him to finally claim her. As a snowy night leads to flirty exchanges and sexual tension, long-held secrets are also revealed that will change everything between them.  Shaw’s a charming hero full of humor with a talent for flirting and dirty talk.  While others see him as incapable of being serious it’s more than obvious to readers just how serious he is about Vanessa in a bold declaration that had me cheering and completely endeared him to me.

Vanessa was a young girl when her family came to this country and it was Perri who was one of her first champions.  From that moment on she and Perri formed a deep friendship, one that has Perri extremely protective of her still today.  Since she was young her attraction to Perri’s brother has warred with her loyalty to her friend and had her keeping her lustful feelings to herself. When an eclectic group of elderly woman talk her into going out with someone from her past though, it will finally push her into going after what she really wants as a snowy night leads to heartfelt truths and a scorching night to remember.  Vanessa’s an immensely likable heroine with a classic style who’s comfortable in her own skin.  She too is quick to laugh and it’s her crackling banter with Shaw that first hints at how delightful they could be together. She’s a strong-willed heroine who, when finally given the chance, stands up for what she wants in a moment that had me cheering and that fueled their HEA.

This was a quick read, no less satisfying because of its short word count, as its witty banter and sexual tension between the main couple kept me full entertained. Vanessa and Shaw were an immensely appealing couple with fun and flirty exchanges that promised something more and that something more was well worth the wait. Surrounding this likable duo was an equally likable cast of secondary characters that pushed this couple together through their secretive machinations.  I was endeared by the eclectic Book Club Ladies and their laugh out loud exchanges along with a group of friends, both male and female, who supported this couple every step of the way. This was a group of friends whose stories have already been told in Ms. Blakely’s Best Laid Plans and The Feel Good Factor and I enjoyed seeing them again as well as their tight-knit interactions with each other.  On a whole this was an enjoyable romance that beautifully balanced humor and sexiness and I look forward to what Ms. Blakely has planned next. 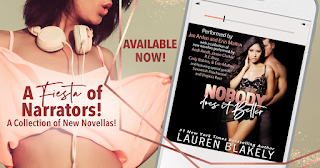 This audiobook includes not one, not two, not three, but FOUR all new novellas! And they're performed by some of your favorite narrators! NOBODY DOES IT BETTER is narrated by Joe Arden and Erin Mallon with special cameo appearances from Carly Robins, Jason Clarke, Savannah Peachwood and Virginia Rose!
Then, treat yourself to the brand-new story ONCE UPON A RED-HOT KISS, read by Jason Clarke and Erin Mallon. This novella is ONLY available in audio.
Next, you’ll find TOO GOOD TO BE TRUE, premiering in audio and read by Andi Arndt and R.C. Bray (from Birthday Suit!)-- it's the story of Flynn's sister Olivia (from Come As You Are)! And it's only available in audio!
Finally, you’ll finish with CAUGHT UP IN HER, available in audio for the first time and performed by Jason Clarke and Carly Robins.
This audiobook is 6 hours of brand new, original content, and it will not be in the romance package. Get your copy today! 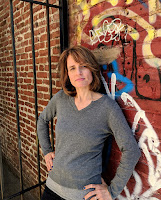 A #1 New York Times Bestselling author, and #1 Wall Street Journal Bestselling author, Lauren Blakely is known for her contemporary romance style that's hot, sweet and sexy. She lives in California with her family and has plotted entire novels while walking her dogs. With fourteen New York Times bestsellers, her titles have appeared on the New York Times, USA Today, and Wall Street Journal Bestseller Lists more than 100 times, and she's sold more than 3 million books. In April she’ll release NOBODY DOES IT BETTER, in May THE DATING PROPOSAL, in June SATISFACTION GUARANTEED.  To receive an email when Lauren releases a new book, sign up for her newsletter HERE!