Fans of sports romances with be quickly consumed by this charming and sensual story of a one-night stand that leads to something more despite the roadblocks of her past and his being a single dad to his brother’s children.  Keep reading to get a tempting taste of Luca by Brenda Rothert, along with my impressions of it, then add this second installment in the Chicago Blaze series to your bookshelf too! 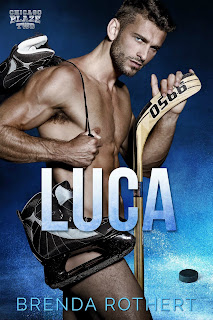 Abby
I only have one love now—the home furnishings business I’m building into an empire. Maybe money and success can’t love me back, but they keep what’s left of my heart safe. One-night stands are my way of scratching the occasional itch I get for something more. And no one’s better for that than a sexy as sin hockey player I’ll never see again after one very hot night together.
Luca
I used to love two things: hockey and women. But now my nieces and nephew are my top priority, because I’m raising them after tragedy stole their parents. Somehow I balance single parenthood and my career as a forward for the Chicago Blaze. There’s no time for women, until I get knocked on my ass by Abby Daniels. She’s everything I’ve ever wanted, but her devastating past may end us before we even get started. 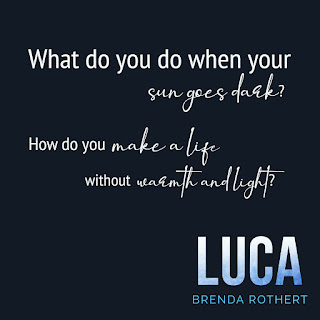 While reading the previous book in the Chicago Blaze series I was immediately drawn to the sexy and talented Luca as he took on the duty of caring for his nieces and nephews after the death of his brother and sister-in-law.  Managing both his career on the ice, and learning the ropes of single fatherhood, changed Luca and in this book we see a man mostly confident in what he’s doing with a few moments of uncertainty.  The moment I met Abby I knew she’d be an intriguing match to Luca, living with her own doubts while showing the world a tough exterior.  What starts out as a casual series of one-night stands soon takes a more serious turn as each became more invested in the other.  What was once casual soon becomes heartfelt as unvarnished truths are revealed that lays both of their hearts on the line in a romance full of heart and soul.

Luca Campbell’s the kind of hero that makes you melt.  A talented hockey player with a heart of gold, a true gentleman who didn’t hesitate to take on the role of single father, also makes Luca an unforgettable hero whose story gave me all sorts of warm fuzzies.  At the start of the story Luca’s just getting the balance right when it comes to work and fatherhood, devoting himself completely to both while leaving no time for himself.  A rare night out with his teammates though ends with him spending the night with a woman who will change his life irrevocably.  At first he’s content with their casual fling but he soon wants more and goes after Abby wholeheartedly, never letting her hide behind her pain and fears.  It’s an adult relationship on display as Luca actually wants to talk things out.  He doesn’t let Big Misunderstandings fester which made for a stronger story and put him in an even more delicious light.  He’s supportive when Abby needs acceptance most, never judging but instead showering her with love as his tender ministrations warmed my heart.  When it comes to the physical aspect of their romance Luca easily switched gears to be quite the dirty talker in scenes that were scorching and that had him frantic to find a connection to her away from everything else in his life.  Moments out of the bedroom showed them to be a formidable pairing as Luca came to count on her support too as they slowly became a family.  Scenes between him and the children he’s playing daddy to were sweet and it endeared me to him all the more as he never hesitated to be a part of girly spa days or coaching baseball.  Through it all his actions pulled at my heartstrings while putting a smile on my face.

Abby Daniels is at the top of her game, a strong-willed businesswoman who doesn’t let her personal life get in the way.  She’s completely devoted to work, showing the world a tough exterior of no-nonsense, but behind the facade is a woman still grieving for who she used to be.  Sleepless nights, weight loss, and moments of panic still rear their ugly heads when she least expects it though and it’s those moments that had me aching for her.  She tried to bury the pain of her past, dulled it through work, and tried to do so in her casual nights with Luca...until he wouldn’t let her hide anymore.  Just as she tries to push him away he pushes back in a battle for her soul and their future that led to her revealing her truly heartbreaking past.  Abby survived things that would've broken most people, reinventing herself to move past the heartbreak.  Where she was once a homebody and caretaker, she’s now a self-assured boss who doesn’t take guff from others.  Once she meets Luca though her past comes back to the forefront as she helps him during a family emergency that has her questioning who she’s become and if she can be what Luca needs in his new life too.  Abby’s an immensely appealing heroine whose past broke my heart.  Her reactions to all that befell her were understandable and the strength she called on to keep moving on had me rooting for her.  Before Luca she was constantly on edge, but around him you could see a weight lifted off her.  Though she was at first shocked by his having children she seamlessly took on a motherly role when a family crisis left him in need of a babysitter.  Her time with the kids pulled at my heartstrings and showed a softer side to her, one where she could stop and smell the roses.  Scenes like these were a balm to her soul and they brought a tear to my eye as they gave her a glimpse of all she could have if she just took a chance.

From start to finish I found myself fully invested in this couple and rooting for their HEA.  With a sweet and sexy hero and a strong-willed heroine hiding her vulnerabilities, I was drawn to this couple as each made the other better.  Their romance started off frantic but soon became sizzling as fun and flirty banter took on a more heartfelt and emotional vibe.  As one-night stands turned to weeks together their connection deepened, becoming more serious, as they dealt with her fears over the past head-on.  Along with their intense romance was heartwarming time spent with Luca’s nieces and nephews (Cora, Jack, and Emerson).  These scenes warmed my heart and showed how easily they could be a family if Abby just let go of her doubts.  I normally don’t care for children in romance books, but this trio made me smile.  They were larger-than-life and full of unexpected wisdom.  They brought out a caring and gentle side to both Luca and Abby and made their coupling even stronger.  Alongside this sweet and sentimental family-in-the-making was an equally appealing cast of secondary characters, some being teammates we’ve seen before as well as a few new characters.  Amongst those who caught my attention most was Luca’s teammate Vic who’s just gotten burned in a romance with an actress and who’s clearly looking for a fight.  The other character is Percy, Abby’s personal trainer, who’s a strong support to Abby when she hits a low point and who has her own painful past.  These characters called to me and I hope to see more of them in the future.  Fans of sports romances will find this a nice balance between action on the ice and off.  While there’s plenty of emotional intensity when it comes to the journey to HEA for Abby and Luca, there’s also some exhilarating scenes during hockey games and in the locker room that shows the playful and brotherly vibe between the players.  By the turn of the final page I’m left satisfied and ready for more from this thoroughly entertaining book series! 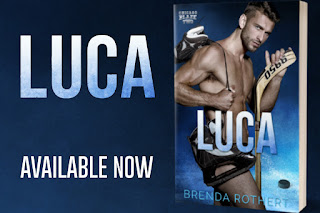