Book Spotlight on To Wed an Heiress by Karen Ranney

A strong-willed woman runs to Scotland to escape an arranged marriage and soon finds herself making a bargain with an eccentric Earl that puts not only their hearts but also their lives in danger.  Keep reading to get a tempting taste of To Wed an Heiress by Karen Ranney, then add this second installment in the All For Love series to your bookshelf! 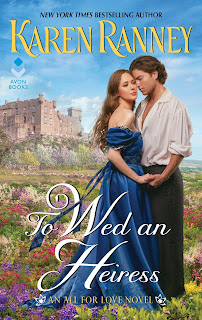 Rebellion drove Mercy Rutherford to Scotland to escape the possessive grip of her fiancé. But it’s fate that lands her in the crumbling highlands castle of Ross Caithart. A dreamer with visions of inventing airships, he’s most certainly mad. Handsome beyond words, he’s also causing an irresistible flutter in her stomach beyond reason. When Gregory arrives to see their arranged marriage to its bitter end, Mercy desperately turns to Ross with an offer of her fortune—and her hand in marriage.
The Earl of Morton has a reputation for being a daredevil eccentric, but even he is hesitant to engage in such a rash proposition—no matter how utterly beguiled he is by the wildly independent American heiress. And yet, with so much at stake, how can he possibly say no? But when their unconventional union grows into a passionate and inseparable love, more than Gregory’s obsession threatens them. Now, Ross and Mercy will have to risk more than their hearts to save it.

“It’s a monster!” Ruthie screamed. “One of those Scottish monsters, Miss Mercy, just like the stories we heard.”
“It’s nothing of the sort, Ruthie,” Mercy Rutherford said, trying to calm herself and, by extension, her maid. Ruthie, however, was having none of it. She grabbed Mercy’s right arm with both hands and was practically atop her, straining to see out the window on the left side of the carriage.
It might not be a monster, but it was one of the oddest things she’d ever seen. A boat with wheels and a tail hanging from a massive sail. The most surprising and alarming thing was that the contraption was aloft like a giant misshapen bird and was now headed straight for them.
“I knew it, Miss Mercy. I knew it. Didn’t I tell you when I saw those three magpies that something terrible would happen?” Ruthie saw omens in everything.
“If it isn’t a monster, Miss Mercy, then what is it?” Mercy didn’t know. She’d never seen anything like Adams. If screaming would do any good, she would join her voice to the horses and now Ruthie. It wouldn’t do for everyone to lose their minds. Someone had to remain calm. The dragon was lower and closer now, directed by a man seated in the boat-like part of the craft.
“Turn,” she said. Of course he couldn’t hear her, but perhaps God could. “Make him turn.” The man was still headed directly toward them. Would anyone be able to convey the information that she’d perished to her parents? She’d written them a letter explaining this forbidden journey, but if she failed to return home would they be able to find out what had happened to her? How odd that she’d never thought to die in Scotland.
Lennox Caitheart swore as he pulled one of the ropes controlling the tail of his airship. There wasn’t supposed to be a carriage in the road. There was never a carriage on this road. The road was the unofficial boundary between his land and the Macrorys’ and he was careful never to venture on the other side of it. Ben Uaine didn’t count. The mountain belonged to Scotland, not the Macrorys, although they’d claimed dominion over everything they saw. No, the carriage shouldn’t have been there and now he was heading directly for it. The wind gusts had been exactly what he planned. He’d kept the air sock and pennant in place for weeks now, measuring the difference in the wind between the morning, afternoon, and evening. 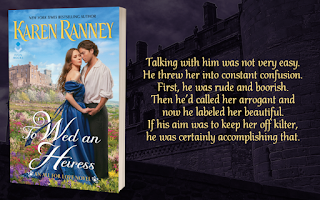 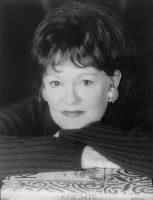 KAREN RANNEY began writing when she was five. Her first published work was The Maple Leaf, read over the school intercom when she was in the first grade. In addition to wanting to be a violinist (her parents had a special violin crafted for her when she was seven), she wanted to be a lawyer, a teacher, and most of all, a writer. Though the violin was discarded early, she still admits to a fascination with the law, and she volunteers as a teacher whenever needed. Writing, however, has remained an overwhelming love of her life.