Book Tour for Running On Empty by S.E. Jakes (GIVEAWAY)

It’s a rocky road to HEA in this sexy and suspenseful tale of second chances set against the backdrop of the gritty MC world crafted through two previous books.  Keep reading to get a tempting taste of Running On Empty by S.E. Jakes, then add this m/m romance to your bookshelf.  In honor of this third installment in the Havoc series make sure to answer the question below for the chance to win an e-copy of the first book in this series too! 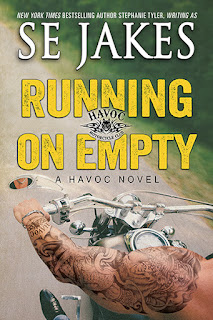 After years of running wild, Linc might’ve finally run out of road.
After a brutal capture at the hands of the Heathens Motorcycle Club, Linc is just trying to heal, mentally and physically. But he’s got men in his life who are complicating everything. There’s Mercy—a Havoc MC biker and the man he is falling fast for—plus an undercover ATF agent and a rogue Havoc member.
But Mercy's keeping him at arm’s length, and Linc is spinning. In an attempt to regain his equilibrium, he heads to the bar where he first met Mercy. Night after night, he escapes Havoc bonds and continues down his merry path of mayhem...mainly in the hopes that Mercy will give chase.
Since Linc’s capture by his old MC, Mercy's been dealing with the fallout of his guilt. He’s trying to give Linc space and still watch over him—all without Linc’s knowledge. But with Linc’s old job calling and a threat to Havoc MC heating up, can they make their way back together?

***LEARN MORE ABOUT THIS BOOK AT RIPTIDE PUBLISHING*** 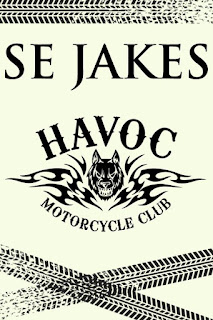 Welcome to Shades Run, where the notorious Havoc Motorcycle Club runs wild and free. Havoc’s got a long reach and strong community ties, and is always on the lookout for infiltrators like ATF agents, car thieves, and others who might harm their enterprises. Havoc’s community is tough to penetrate, but once these hard-living motorcycle men have taken you in, saved your life (maybe after threatening it a few times), or even fallen in love with you, you’re Havoc MC forever. Unless you’re one of their enemies, in which case you’re completely out of luck.


***LEARN EVEN MORE ABOUT THE HAVOC SERIES here***

SE Jakes writes m/m romance. She believes in happy endings and fighting for what you want in both fiction and real life. She lives in New York with her family, and most days, she can be found happily writing (in bed). No really...
SE Jakes is the alter ego of New York Times bestselling paranormal and romantic suspense author Stephanie Tyler.

PRIZE IS AN E-COPY OF THE FIRST BOOK IN THE HAVOC SERIES, RUNNING WILD!

-GIVEAWAY IS OPEN TO EVERYONE.
-To be entered, LEAVE A COMMENT TELLING ME WHAT YOU LOVE ABOUT MC-THEMED SERIES (ALONG WITH YOUR EMAIL ADDY).  NO EMAIL ADDY=NO ENTRY.
-Winner will be chosen randomly from each valid comment left.
-GIVEAWAY ENDS AT 12 PM EST ON MAY 4TH.
at April 29, 2019