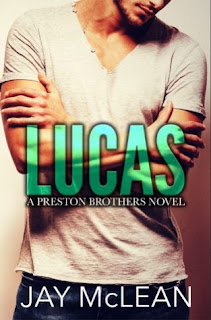 In a sprint, every millisecond counts.
When you’re waiting for love, those milliseconds can feel like eons.
High school senior Lucas Preston has it all: star of the track team, a scholarship waiting for him, an apartment to himself and a revolving door of girlfriends. He also has an older sister, five younger brothers and a father who relies on him to make sure those brothers don’t kill each other.
His saving grace? Lois “Laney” Sanders, a girl he started to fall in like with when he was just eleven. A girl who became his best friend, his confidant, his courage.
It took only sixteen clicks and eight seconds for Lucas to realize that his like for Laney had turned into love.
Eight life-changing seconds.
It’s also the exact length of time it took to lose her.

What a wonderful way to start the Preston Brothers series!  From the very first page to the last I was utterly charmed by two friends who slowly become more in a tale that warmed my heart while pulling at my heartstrings.  Readers are introduced to the main couple when they meet as youngsters and watch their relationship evolve over the years as issues of love and friendship, along with angst-fueled moments, drive this story that kept me glued to the pages.  With each turn of the page readers will become captivated, waiting to read about the next Preston brother to find his HEA.

Lucas Preston's the oldest of his brothers and he takes his role as big brother very seriously.  Since the death of his mother he's really stepped up in a protective role that sees him as the glue holding the siblings together.  He's dependable with a good heart that shines through.  When it comes to matters of the heart though, he's a bit less self-assured in his relationship with Laney (the young woman who comes into his life when he's a youngster).  There's an immediate connection between Lucas and Laney, a connection that confuses him throughout the years as his feelings evolve.  He knows from the very start that Laney's his everything, but her friendship means a lot to him which often has his heart warring with his mind.  As he grows older, his decisions and his blindness to what Laney wants out of their relationship frustrated me a time or two, but through it all he meant well and it all led him where he needed to go.  When Laney needed him most he was there for her in a hard-fought romance that saw him becoming the quintessential book boyfriend.  I adored Lucas from the very beginning, was charmed by the burgeoning feelings he had for Laney, and enjoyed the tight-knit connection he had with his mother.  Her subtle pushes where Laney was concerned put a smile on my face and even after her death I could feel her presence as Lucas and Laney continued to grow closer.

Lois "Laney" Sanders had a tough childhood due to the divorce of her parents.  Moving to a new town and living with her father meant that she was lacking those moments of motherly love, but luckily the family next door brings her into their lives and it changes her life irrevocably.  Not only does the Preston matriarch become a mother to her, oldest son Lucas takes a special place in her heart that grows more intense over the years.  As the years pass she recognizes that she wants more than just friendship with him, wants to be more than just a support to him, but his clueless demeanor has her keeping her true feelings to herself until he finally makes his move with words and deeds that had me cheering.  Laney's a wonderful heroine, supportive of the family next door who became like a family of her own.  She's particularly close to Kathy Preston and their interactions warmed my heart as Kathy was a guiding force for Laney and helped her work through some very serious issues.  In turn, Laney was there for Lucas and his family when Kathy died, sharing each tear and taking care of them when their grief was weighing on them.  She was mature from a young age, fit in beautifully with the Preston family, and her actions had me rooting for her every step of the way in a relationship teeming with sexual tension and unexpected twists and turns.

As children, Lucas and Laney had a cute friendship, one that started out playfully and competitively.  As the years passed though the two of them grew comfortable in their time together, placing greater importance on their being together in a shift that turned more loving.  It's a turn that pulled at my heartstrings, saw them becoming more mature in a connection that became infinitely more satisfying as these two were meant to be together.  It was a rocky and angst-fueled journey for the two of them, involving issues that were realistically depicted with emotions that weren't always easy to express, and with each turn of the page I became more and more invested in their HEA.  Alongside this likable main couple was an equally appealing cast of secondary characters, the rest of the Preston family, who clearly have hurts of their own to deal with.  Each brother is larger than life, presenting a united front in protecting their lone sister, and I enjoyed how easily they included Laney in their protective demeanors.  She was practically family from the start which made this an even stronger romance as everyone had a hand in seeing their HEA come to fruition.  Fans of friends to lovers romances will be clamoring to add this book to your shelves, long to be charmed by this loving and likable couple, and will be greatly anticipating each new installment as an excuse to fall a bit more in love with the Preston family.

*I got this book from the author for review in exchange for my honest opinion.
at August 02, 2020