Set in the football world, a woman finds herself relying on the protection of a quarterback when dangerous threats start coming her way and as their fake marriage starts becoming all too real. Keep reading to get a tempting taste of Hard Knox by Amber Malloy, along with learning more about this book by visiting the other sites hosting this tour, then add it to your bookshelf.  In honor of this second installment in the Perfect Stats series make sure to fill out the form below for the chance to win a $10 Amazon GC too! 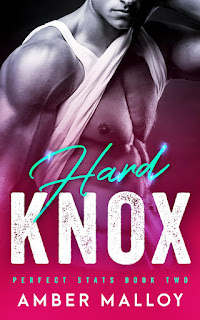 Everything comes easy to quarterback Gavin Knox—women, football, even money. However, the only thing he truly wants but can’t win is the beauty of his dreams, Remy Bell.
A simple favor to save the girl turns into the quarterback losing his heart.
As beautiful as she is fun, Remy Bell has only one problem—a psychotic killer with political power wants her dead. Always a ‘two steps ahead’ type of gal, she plans to outrun the maniac. Marriage and a sweet life in the football star’s hometown in Canada would give her the cover she needs, but Remy doesn’t stick around long enough to find out. She travels all over the world, photographing the most beautiful and devastating events, but her now-husband’s tabloid activities lead her to the one place she should avoid…back home.
Superstar Gavin Knox wins at everything. However, once he scores the girl of his dreams, he’s suddenly in danger of losing the one thing he has always needed. Before she can slip through his fingers, he offers her a deal she can’t refuse—marry him for Canadian citizenship, which will protect her, and after five years, they can divorce. Knox is positive that she will fall head over heels in love with him, but it doesn’t happen. After six years of marriage, two playoff titles and a third on the way, Knox is forced to contend with a successful wife almost more famous than he is.
Determined to get exactly what he wants, which includes having Remy and a family, he devises a stupid scheme that puts everything he’s worked so hard for in jeopardy.

HERE'S THE PLAYLIST IN SUPPORT OF THIS BOOK:

Amber Malloy dreamed of being a double agent but couldn’t pass the psych evaluation. Crushed by despair that she couldn’t legally shoot things, Amber pursued her second career choice as pastry chef. When she’s not writing or whipping up a mean Snickers Cheesecake, she occasionally spies on her sommelier. Amber is convinced he’s faking his French accent.