Book Tour for Among the Pages by Sara R. Turnquist (GIVEAWAY).....

The lives of women in the past combines with a young woman's college years in the here and now as she struggles to find herself in this introspective contemporary tale.  Keep reading to get a tempting taste of Among the Pages by Sara R. Turnquist , then discover even more about this book by visiting the other sites hosting this tour.  In honor of this standalone story make sure to fill out the form below for the chance to win a $50 bookstore GC too! 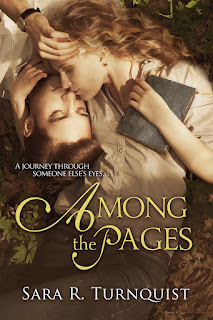 A woman’s choice...is in question.
Brianne is a somewhat naïve college freshman. She becomes disillusioned as her professors and peers challenge many of her long-held beliefs. When she finds a diary that belonged to a distant relative, she hopes it will offer much needed distraction. And she is soon drawn into the story of a passionate woman who seems to whisper from the past.
In 1915’s New York, idealist and primary teacher Margaret struggles with the problems women face at home and in society. She is first timid about speaking her mind, but in time cannot keep her impassioned spirit hidden—not even from the gentleman who teaches in the classroom next door. His concern for her stretches the limits of their friendship, pressing into something more. Caught up in the Women’s Suffrage Movement, she faces down authority figures and others who question her beliefs.
And so, Brianne is whisked along on this journey as Margaret joins the fight for women’s rights, all the while trying to work through her own questions and experiences with modern feminism.
Before long, things spin out of control and she wonders where her newfound relationship fits into everything? Are there any clear answers? Will she land on her feet? Or be forever lost to herself?

HISTORICAL TIME PERIOD (1915) – Margaret and Henry talk on a Sunday after church.
She narrowed her eyes and bit at her lip to keep her surprise from showing. How did he know this? Surely he didn’t care about the Woman’s Movement. Or did he? Why should he? His precious Abigail was ever the dutiful, demure, docile girl that any man would seek. She wouldn’t be caught within a hundred yards of anything related to women’s rights.
He continued, “I also understand that anyone caught attending her speeches on Sunday is in danger of being thrown out of their church. You don’t want that, do you?"
“Maybe I do,” she shot back and looked away. His words stung. Perhaps more so because he wasn’t wrong. About any of it.
“You don’t mean that.” He craned his neck, trying to catch her eyes.
“What if I do?” She jerked her head, turning her features toward him. “Pastor Thompson said some harsh things today. I don’t know if I can continue to submit myself to the authority of a man who preaches in such a way."
“In what way?” His voice was gentle. Try as she might, she could not find anything accusing in his tone.
“He made several assertions without the Scripture to support it. Yet he insisted that the Bible was clear about the subject. I think a man of the cloth ought to be more careful when making such statements about the word of God without the proper foundation."
Henry’s eyes searched hers. The deep brown fell soft upon her eyes and caressed her features with gentleness. How could she stay angry when she was losing herself in such dark warmth?
She averted her gaze. What was this? It would not do for her to be thinking about him this way. This was not proper! He was someone else’s beau.
“Listen,” he said, moving closer. “I’d regret if anything bad happened to you."
She nodded, focusing on the lines of the sidewalk.
“I would have to teach your class and mine.” His voice became thick with sarcasm. Her eyes shot to his and found his lips spreading in a huge grin.