Book Review for Ghostin’ You by Lyssa Cole.... 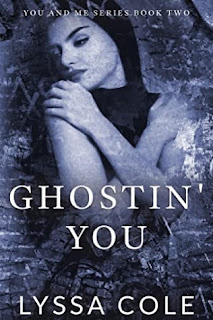 Book two of this interconnected series continues with broken hearts and love in all the wrong places...
The last thing I expected to do was walk away from him.
My heart broke in two, my world cold and empty.
While I fell into the arms of another,
He lost himself to alcohol and parties.
I tried to pick up the pieces, tried to move on,
But the days were long, and the nights were longer.
Dean was there, with open arms, and promises of a future,
One I didn’t want but thought I needed.
Levi haunts my dreams while Dean is there to wipe away my tears.
One destroys me, while the other makes me better.
But sometimes better isn’t best and sometimes you can’t help but choose what destroys you.
I should be ghostin’ him while lovin’ you but instead my heart beats for you both.
How will I choose?

And here I thought the previous book in the You & Me series was an emotional rollercoaster ride...boy howdy!  This one is even harder to get through and I'm now left a blubbering mess after reaching this book's cliffhanger ending.  From start to finish readers are put through the wringer alongside main characters that are clearly struggling at the start, struggling with addiction, self-doubts, and unrequited love.  With each turn of the page readers will become even more invested in the outcome as a love triangle comes crashing down into a moment that will change all of them irrevocably.

Raina's wallowing in heartbreak at the start of this story, missing Levi but knowing that staying with him would've dragged her down too.  She's simply going through the motions, a ghost merely existing one day at a time through actions that sometimes frustrated me while understanding where her heartache came from.  She's depressed and clearly a lost and lonely soul, looking for a bit of solace...which leads her to Dean.  Dean's a truly good guy, sweet and sexy, and it's obvious that he loves Raina.  Not so obvious is how she feels about him.  Dean's a very appealing hero and a delicious piece to Raina's love triangle, but he's got his own baggage, baggage that he'll have to deal with one tragic night of no return.  It's baggage that will lay him bare, pluck reader's heartstrings, while leaving them reaching for a tissue repeatedly.  As to the other part of Raina's love triangle...Levi's addiction to alcohol takes center stage in this story as it's become an all-consuming habit for him.  It's taken over his life, taken the love of his life, and turned him into someone very hard to love.  He's angry, verbally abusive at times, and doesn't hesitate to lash out when feeling hurt.  Despite his hurtful behavior he still can count on his friend Drew to support him.  Drew's habit of enabling started in the previous story but comes to an end here though, after seeing how low Levi's fallen.  Drew knows he must finally be a real friend to Levi and get him help in the first step to a new life for his friend, a first step towards introspection for Drew too regarding his past actions while dealing with the fallout from the cliffhanger readers are left with here.  Another character who left a lasting impression was Raina's friend Mabel...a ball of energy and a strong support to her friend.  She helped Raina work through her depression and was there when her friend needed her most...despite some harsh treatment thrown her way.  She's the kind of secondary character you'd love to see have a story of her own and I look forward to seeing more of her in the next installment.

On a whole this was a gritty and angsty read, one that you couldn't put down despite how much pain you were feeling.  Each character was put through the wringer, tore down before starting to rebuild, with their feelings laid out for all to see.  Issues of addiction, the toll it took on the addict and those surrounding the addict, were powerfully depicted and it broke my heart at times as it pushed buttons of my own experiences with an alcoholic parent.  Ms. Cole performed a masterful balancing act in presenting an epic love story weighed down by addiction, giving us characters who were perfectly imperfect and who we cared about.  From start to finish I was on the edge of my seat, knowing things wouldn't end well, but hoping I was wrong.  By the time the cliffhanger arrived I was already an emotional mess, now left waiting with bated breath to see where these characters go from here.

*I got this book from the author for review in exchange for my honest opinion.
at August 25, 2020