Young love comes rushing back to the surface in this tale of second chances in a small town.  Keep reading to get a tempting taste of The Promise Kept by Maggie Mae Gallagher, then learn even more about this book by visiting the other sites hosting this tour.  In honor of this second installment in the Echo Springs series make sure to fill out the form below for the chance to win a $25 bookstore GC too! 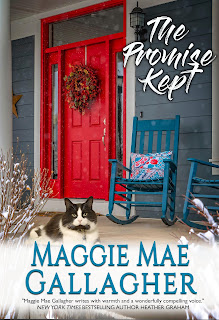 Cybil Roe gave her heart away thirteen years ago only to have it wind up shattered. With painstaking determination, she has rebuilt her life into something to be proud of today. Yet all her future plans are upended when the only man she has ever loved returns to Echo Springs. Nor does it help that he seems bound and determined to draw her back into his life. Cybil vows to stay away from him, no matter what seeing him all the time does to her resolve.
Miles Keaton wiped the dust of his hometown off his shoes years ago, never expecting that life would lead him back to the place where he had begun. Coming home to Echo Springs, to Cybil, to start a new law practice and a new life is a risk he never thought he'd take. She hates him – with good reason. Years ago, he walked away when she needed him the most. But now he is back, and intends to argue the case of his life, one more important than any he has debated in a courtroom, because she is the one woman he cannot live without.
Can Miles convince Cybil to take a second chance on him, or will a secret she has kept all these years destroy any future they might have?