Readers will find themselves captivated by this time traveling romance set in the rockstar world that deals with addiction and the meaning of fate in matters of the heart.  Keep reading to get a tempting taste of Dreamland by Beth D. Carter, along with my impressions of it, then add it to your bookshelf.  In honor of this emotional and intriguing tale make sure to fill out the form below for the chance to win an Amazon GC too! 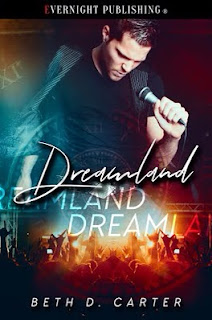 Dicen Burke had it all.  As lead singer in the world famous rock band, Dark Army, the world lay at his feet.  But the path to super stardom warred with a painful past and during a performance the demons haunting him finally descended.  Unable to stop the self-destructive path of alcohol and drugs, when he fell, he fell hard.
He wakes up in a world he doesn’t know.  The Twenty-first century rocker is now in the 1920’s, lost and bewildered.  He’s taken in by Juliet Fox, a beautiful woman trying to be a positive influence in her brother’s wild lifestyle among the Hollywood Motion Picture elite.
Dicen does his best to adapt, and with Juliet by his side, he discovers a world that offers him a clean slate.  But when he’s pulled back to the present, separated by time from the one person that gives him a reason to live, will he find a way to push past his demons as well as find Juliet again?

“Hey you,” a soft voice commanded. “Open your eyes please."
He tried to obey, struggling to push past the lingering darkness that clung to him like a second skin. God, he felt horrible.
“That’s it,” she soothed. “Open your eyes. Look at me."
Finally, he managed to raise his eyelids. An angel leaned over him, staring into his eyes. She smiled at him so he smiled back. He had always thought it would be demons that would come collect him when he died so it amazed him that heaven was calling.
“Ah, a set of beautiful baby blues,” she murmured, stroking his cheek. “Hello, handsome."
He opened his mouth to say something but the words wouldn’t come. His tongue felt swollen, dry. He forced himself to swallow to try to get some saliva flowing.
“W-what happened?"
She cocked her head. “Bad hooch I’m thinking. Gotta be careful of certain juice joints. Come,” she said, holding out her hand. “Let’s get you sitting upright."
He hadn’t realized he’d been lying down but as she helped him up, he realized the halo around her head had been nothing more but the flickering of a street light accentuating the midnight hue of her hair. When he was vertical once more, he finally saw all of the woman’s features. Short bobbed hair held back by a headband made of crystal beads while dark eyes watched him from under thin, perfectly arched eyebrows. Her lips were a cupid’s bow, painted a deep red. Her skin a flawless pale shade that contrasted sharply with her heavily made up eyes.
“Like what you see?” she asked.
He blinked. “I always like my fans. Where am I?"
One of those thin eyebrows arched. “That hooch must’ve really made you balled up. You’re off Hollywood Boulevard, of course, belly up in an alley."
He looked around, completely baffled. How the hell did he get here? Where was the stage? The screaming fans? Kieron, Van and Tony?
“Do you have a name, handsome?"
“Yeah, sorry. I’m Dicen Burke."
He waited. He waited for the name to sink in, for her eyes to widen, for her to begin batting her eyes in an attempt to flirt her way into his bed.
“Juliet,” she said. “Juliet Fox. I was looking for my brother, Thayer, and figured I’d find him upchucking out here and instead I find a keen big six. Say, you’re no drugstore cowboy are you?"
“Excuse me?” Her lack of a response to his name, along with slang he didn’t understand, threw him.
“You know, a guy that hangs around street corners looking to pick up ladies. Just so we’re clear on the matter, I ain’t that kind of girl,” she informed him, the smile on her face lessening the harshness of her tone. “Have you seen another man out here, by chance, throwing up?"
She confused him. He shook his head and then wished he hadn’t when it throbbed. “God, I need an aspirin.” 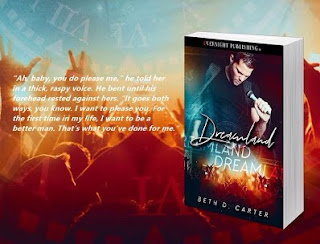 In a story that could've been full of cliches, readers are instead given a clever and unique twist to the usual rockstar romance through the use of time travel and second chances.  Add in the emotional fallout of addiction and childhood abuse and you end up with a story that I couldn't put down.  Starting with a visit to the Roaring 20s, to a return to the bright lights and constant attention of the concert stage, readers will find this an emotional journey full of tears and heartbreak, before ultimately bathing your heart in satisfaction.

Dicen Burke's life had become one of a stereotypical rockstar where sex, drugs, and rock 'n roll reigned.  The drugs and alcohol started off as a pastime for him before he realized how useful they were in blocking out a painful past just hinted at but that fuels all his self-destructive tendencies.  One night on stage, taking a handful of pills, leads him to an oblivion he never experienced before.  It's a moment that changes his life irrevocably as he's sent back in time to be introduced to a person that will give him the support and acceptance he needed to change his life for the better.  Being sent back to the 1920s saw Dicen as a fish out of water, but taken in by the sweet and kindhearted Juliet Fox, a young woman with a tragic past of her own that has both of them protective of the other.  Sweet and sensual interactions were balanced with the feel and color of the time, pulling readers into the past, while the friendship between Dicen and Juliet became something more.  Tragedy is only a step away though in a romance that transcends time as he ends up back in the present and trying to rediscover lost love while fighting his addictions once and for all.  Helping him fight his addiction is sober living coach Jules Carlett, a spitting image to Juliet, and a brash woman who's not afraid to push Dicen when he needs it most.  It's a rocky romance between the two, one that's a bit glossed over in the present, as Jules' disbelief of past lives keeps her from fully committing until this book's very satisfying conclusion.


With this release Ms. Carter put an intriguing spin to time travel romances, using an overdose as the conduit, which made for a very powerful beginning...a beginning that highlighted just how broken Dicen is and how much work he has to do to heal.  The look and feel of the 1920s is vividly depicted and realistically believable.  From the clothes to the lingo, I felt like I was part of the crowd.  Juliet was a sweet heroine used to taking care of her alcoholic brother Thayer, and it was this part of the story that was the most engaging as the romance between her and Dicen had to be kept secret considering the time period.  Juliet's experiencing love and steamy interludes for the first (meaningful) time was a delight to see too and had me rooting for them through every up and down they experienced...through both the past and the present.  I didn't find as deep of a connection to Jules unfortunately as less time was spent with her and Dicen...his feelings from the past were what bound him and Jules together now and set them on the path to HEA.  Alongside this inspiring romance was the difficult issue of addiction.  Both Dicen and bandmate Kieron were addicts and the author didn't shy away from depicting the desire and need for the drugs...notably depicted in a scene at a party and through the description of Kieron himself.  Kieron's story is intertwined with Dicen and I'd love to read more about him, get deeper insight into his past and his journey to sobriety in the chaotic and demanding rockstar world.  On a whole this was a well-crafted story and I applaud the author for her respectful handling of addiction issues and look forward to what she has planned next. 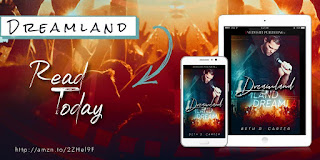 I began reading my mom’s Harlequin Presents in the fifth grade, and from the first story I knew I wanted to write romance novels. I like writing about the very ordinary girl thrust into extraordinary circumstances, so my heroines will probably never be lawyers, doctors or corporate highrollers. I try to write characters who aren't cookie cutters and push myself to write complicated situations that I have no idea how to resolve, forcing me to think outside the box. I love writing characters who are real, complex and full of flaws, heroes and heroines who find redemption through love.