Book Cover Reveal for Only One Chance by Natasha Madison....

A star hockey player on and off the ice finds unexpected romance with a woman from his past who he longs to make a future with in this steamy story of second chances and breaking the rules.  Keep reading to get a tempting glimpse of Only One Chance by Natasha Madison, then start counting down the days until this second installment in the Only One series releases on October 20th! 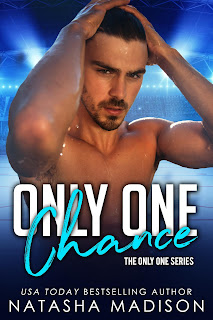 Miller
They called me the pretty boy on and off the ice. Hockey’s most eligible bachelor.
When my teammate asked me to donate one date to his charity, I figured why not. Worst case, I’d spend the night with a fan. Best-case scenario, she would be hot. What I wasn’t expecting was for my dream girl to be the highest bidder.
For years, she brushed me off, and now, I finally had a chance to take her out and show her who I really was.
With only one shot at this, I really hoped I didn’t mess it up.
Layla
At the top of my career, I was riding the wave of my sports talk show having the best rating on the radio. I also made it a rule to never date any sports players.
It was my one rule, and I was sticking to it until I bid on the only man who gets under my skin.
All it takes is one touch, one night, one kiss, and only one chance.

When her nose isn't buried in a book, or her fingers flying across a keyboard writing, she's in the kitchen creating gourmet meals. You can find her, in four inch heels no less, in the car chauffeuring kids, or possibly with her husband scheduling his business trips. It's a good thing her characters do what she says, because even her Labrador doesn't listen to her...