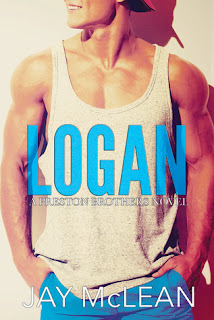 As a kid, Logan Preston was a brat.
Through his teens, he became the bad boy.
Now, at nineteen, no one knows what the hell to expect.
High school dropout, Logan Preston is a good-for-nothing stoner.
A black sheep.
A disappointment.
The worst Preston Punk of the lot.
At least that’s how everyone in his small town makes him feel.
But Logan Preston has secrets.
Secrets so dark and so deep below the surface that the only way he can fight them is to stay high, high, high.
He wears cockiness as a mask.
Arrogance as his armor.
Until one girl, one night, asks one life-changing question: What's beneath the bravado, Logan Preston?

After being introduced to the Preston brothers in Lucas by Jay McLean, I was immediately captivated and couldn't wait to get to know each sibling better.  After falling for Lucas though I wasn't sure anyone else could compare, but Logan has definitely pushed his way to the top of my nightly dreams.  A young man who's always been troubled finds himself attracted to the one woman who might give him what's always been missing in his life in an emotionally intense romance full of unexpected twists and turns.

As the middle child, Logan never really stood out, going with the flow and with anyway the wind blew...except for when he was getting high, cutting school, and hiding truths about himself behind a wall of bravado.  He was brash, a bit of a douchebag at times, and it was clear that he was heading for a bad ending.  The moment he meets Aubrey though is the moment everything changes for him....and for her. They start out as enemies with delightful back and forth banter teeming with sexual tension that soon has them finding more commonalities than reasons to keep fighting.  Logan never saw her coming in a slow-burn relationship that has both of them putting their hearts on the line, working through painful issues from their pasts, and letting the healing power of love wash over them.  Logan's a complex character behind his stoner facade, a character who had me laughing one moment while breaking my heart the next before frustration would set in when he most needed to prove himself to Aubrey.  For most of his life he felt alone, despite being surrounded by a loving family, with only marijuana to embrace him when things got dark and his narrative about "Mary" is a bit obsessive and shows just how desperate he is to escape his pain.  With Aubrey he finally feels capable of giving love to another and accepting it in return in a relationship that pulled at my heartstrings while making me teary-eyed a time or two as it was a hard-fought journey to HEA.

Aubrey's the new girl in town, an unassuming addition to the neighborhood who's got her own bruises from a hurtful ex which leaves her leery of opening her heart up again to another...but when it comes to Logan she just can't help herself.  Despite the unintentional hurts he causes her, Aubrey forgives him time and again, offering support and acceptance whenever he needs it.  She also finds a much-needed family of her own with the Preston family bringing her into the fold through charming and heartwarming interactions with each member, particularly between her and young Lachlan.  Aubrey's a likable heroine, a bit more forgiving than I could be concerning Logan's missteps, but it spoke volumes to her big heart and caring nature and was a definite bright spot in Logan's life.

On a whole this was one heckuva emotional rollercoaster ride dealing with heavy issues balanced with a sweet and sensual romance between two people whose hearts were caught by surprise by their deepening connection.  It was a journey that wasn't sugar-coated and it highlighted Logan as a perfectly imperfect hero who I couldn't help but root for even as I wanted to slug him a time or two.  Aubrey's a good match as she's just what he needs as he works through his demons...someone who's loving and accepting despite his flaws.  Along with this compelling main couple is an equally entertaining cast of secondary characters...the Preston family.  They're an amazing group of people who I wish would adopt me as they're supportive, protective, with interactions that warmed my heart.  I'm not normally a fan of children in romances but Lachlan's utterly delightful!  He's the baby of the family but wise beyond his years and I treasured every interaction with him.  I enjoyed getting an update on past couples and squealed in delight over a reveal in the epilogue as it was a long time coming.  With each new installment in this series I feel like part of the family and can't wait to see where the author takes us next!

*I got this book from the author for review in exchange for my honest opinion.
at August 08, 2020