A warrior bent on revenge finds his heart involved when the woman who's been fighting by his side needs him to fight for her and the clan he once swore vengeance on in this thrilling historical romance.  Keep reading to get a tempting taste of Highland Gladiator by Kathryn Le Veque, then add it to your bookshelf.  In honor of this first installment in the Scots and Swords series make sure to fill out the form below for the chance to win 1 of 5 copies of this book too! 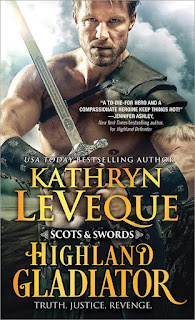 When Lor Careston’s quiet Highland village was attacked and burned, he felt helpless against the raiders who destroyed his home. Seeking revenge, but lacking the fighting skills needed to execute his mission, he sets out to find the Ludus Caledonia—a mysterious fight guild that turns men into warriors.
Lor trains hard, proves himself in the ring, and earns a place within the very clan that decimated his home. He knows he can set his plan for revenge in motion from the inside. But his plan didn’t include Isabail Keith, a beautiful warrior lass who prefers broadswords to embroidery. Lor thought the Keiths were his enemies, but when Isabail is threatened, he’ll have to decide what he’s willing to risk for the woman who has captured his heart and the clan that has become his home.
Truth. Justice. Revenge. Behind these stands the Scotsman’s sword.

The village of Brechin, Scottish Highlands Year of Our Lord 1484
He’d seen her before.
Lor knew that the moment he looked up from the business he was conducting with his grandfather’s friend. In the midst of a busy marketplace on a glorious spring day, he caught sight of a woman he recognized, which wasn’t unusual in itself, but with this woman, it was. Lor and the old man with the missing eye had been going over the purchase Lor was
making of slag material for his grandfather’s blacksmith stall when he glanced up and saw her. In truth, he saw her only from the back; it was the hair that had his attention. In the sunlight, the red curls glistened like molten fire.
Everything about her caught his eye. She was dressed in a long tunic and braies from what he could see, unusual for a lass, but she’d marched down the road with her basket of skins in her arms in a cadence that seemed much more like a man’s than a woman’s.
Purposeful.
Confident.
He’d seen that walk once before.
“Lor?"
The old man next to him was trying to get his attention, but Lor couldn’t take his eyes from the woman as she walked down the dusty avenue. She was weaving in and out among the villagers on this busy market day, and Lor didn’t want to lose sight of her.
He put up a hand to the old man.
“Wait a moment,” he said. “I’ll return."
He didn’t wait for a reply. Quickly, he headed out into the street while the old blacksmith watched him with some frustration.
“Where are ye going, lad?” he called after him. “If ye dunna come back, I’ll rob ye blind.
I’ll tell yer grandfather that it’s yer fault he was cheated out of a good price for his iron!"
The old man meant it as a jest, hoping Lor would return, but the young blacksmith simply waved him off as if he didn’t believe him, which he didn’t. His grandfather, Nikolaus, and old Albe had been doing business since before Lor was born. He didn’t much believe anything the old liars said.
At the moment, he was on the hunt.
The red curls were up ahead, and he followed them like a cat tracking a mouse. There was something about the woman that he remembered from long ago, and as he politely stepped aside to let a woman and her children pass by, it began to occur to him just where he’d seen that hair.
Gleann Deamhain.
The Vale of Demons.
It was difficult to say why an incident from eight years ago suddenly stood out for him. It had been a fleeting moment as far as moments in time went. But it had stayed with him: the young lass who had practically saved him from a band of bloodthirsty cutthroats. Never mind that they were only children; Lor remembered being as afraid of them as if they’d been the mightiest army of men.
Gòrach, they’d called him.
He’d been stupid once, but he wasn’t going to be stupid again.
This time, he was going to be careful.
Lor continued to follow the lass. She finally came to a stop at a merchant who dealt in hides. As he hid back in the crowd, watching, Lor could see the lass holding up the fine pelts she’d brought, negotiating a price with an old man who seemed to be smiling at her too much. At one point, he reached out and pinched her cheek.
She slapped him.
Lor laughed softly.

With over one hundred published novels, Kathryn Le Veque is a critically acclaimed USA Today bestselling author, a charter Amazon All-Star author, and a #1 bestselling, award-winning, multi-published author in Medieval Historical Romance and Contemporary Romance. She lives in California.