Readers looking for a charming, fun, and flirty romance will definitely want to add this book to their shelves as a single dad finds himself in a sensual dance with his son's straight-laced teacher.  Keep reading to get a tempting taste of Troublemaker by Kayley Loring, along with my impressions of it, then add this story set in the Sleeper/Charmer world to your to be read mountain.  In honor of this delightful rom-com of opposites attracting make sure to visit the link below for the chance to win a $25 Amazon GC too! 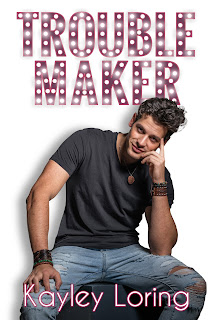 TO: Alex Vega
FROM: Emilia Stiles
SUBJECT: Hello
Dear Mr. Vega,
I felt it necessary to follow up on today’s meeting, since we weren’t able to speak candidly in front of your son.
I was shocked to discover that ​you​ are Ryder’s dad. Given that your ex-wife will be out of the country for a while and you are currently his primary caregiver, I’m sure you understand why we need to establish boundaries and etiquette. I think it would be best if we just pretend that we met in person for the first time today.
Your son is a very bright (flirtatious and talkative) student and since his education is a top priority for both of us, I hope I can count on you to respectfully refrain from grinning at me, using that sexy tone of voice, and undressing me with your annoyingly beautiful brown eyes if we should happen to interact with each other again in the future.
Thanks so much,
Miss Stiles
TO: Emilia Stiles
FROM: Alex Vega
SUBJECT: Re: Well, hello again...
Dear Miss Stiles,
Great to hear from you. My son’s education is indeed a top priority. As such, I respectfully agree to refrain from doing all of the aforementioned things.
However, I can’t promise to stop thinking about that kiss at the bar this summer. I’ve been thinking about it for the past month. It’s interesting how humorless and uptight you are about my son’s totally awesome personality, given that I have personally witnessed just how flirtatious and talkative you yourself can be when mildly intoxicated.
You’re so welcome,
Alex
P.S. I volunteered to be a chaperone for your next field trip. See you then. 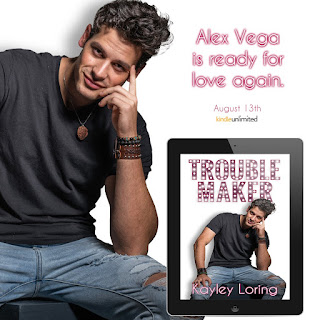 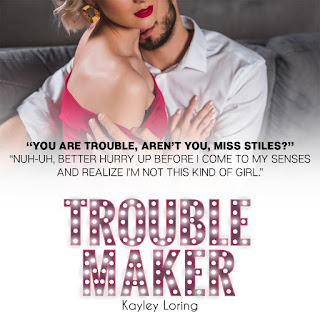 **Audiobook is coming in September and will be narrated by Zachary Webber and Mackenzie Cartwright!** 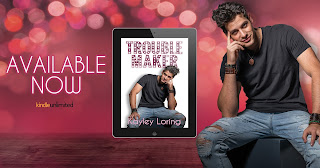 From the moment I started reading this book I was utterly charmed!  Through rapid-fire banter, to humorous inner dialogues, to an endearing cast of secondary characters, I couldn't wipe the smile from my face as two apparent opposites find their way to HEA.  Set in the same world as Ms. Loring's previous books, Sleeper and Charmer, readers are reintroduced to single dad Alex who's feeling a bit lonely despite having his son all to himself while his ex is on tour.  Seeing his fellow child stars find their HEAs has him longing for more though, longing for someone real and different from the usual women he attracts, and one night at a bar has him meeting just such a woman.  Emilia has always been the proverbial good girl, but one night (and a few drinks) has her making a memory that neither can forget in a fun and flirty romance of second chances that puts a sexy spin on parent/teacher interactions!

Alex Vega had a pretty good life as a former child actor and now as a world class director.  When it comes to business he's extremely successful and is just as successful at being a single father.  His son Ryder is the light of his life, his reason for being, and I adored their interactions for their humor, heart, and realism.  When it comes to the opposite sex though, he's in a slump and feeling dissatisfied and disillusioned...until the moment he sees a tipsy Emilia.  Their attraction is instant and combustible but ends before it can start.  Fate can sometimes be kind however and when the sizzling emails between Alex and his son's new teacher bring him back to Emilia, the heat really turns up in a romance that has a forbidden slant to it that had me rooting for them every step of the way.  Alex is a delicious hero with a good heart!  The love, pride, and joy he finds in his son is endearing and made me like him all the more.  He's a tell it like it is kind of guy, bold and brash in what he wants, and unafraid to go after Emilia's heart despite the danger to her job.  He's willing to take his time when it comes to the heart-leery Emilia in a slow-burn romance that was steamy, sweet, while making me blush and smile at the same time.

Emilia Stiles recently broke up with her boyfriend...it was actually their final break-up and it became the impetus to her leaving her small town behind and starting over.  With her friend's encouragement she finally decides to snub her past completely by going out for shots and dancing, enjoying a night where she lets loose of all her usual inhibitions.  What she finds is an instant attraction to a stranger who becomes fodder for all her dreams once they're separated, dreams that suddenly become a reality when that stranger shows himself to be the father of her new student and shows up at school to talk.  It's an equally combustible reunion, one that tempts her to go further despite the rules against parents and teachers dating and leads to an unforgettable romance.  Emilia's a wonderful heroine, a bit nerdy and bland in her looks but oh so real when it comes to her heart.  She's a truly good person, one who's no longer content to let life pass her by, and I was cheering her on as she and Alex worked their way to HEA.  Early on she's a bit timid and uncertain but the longer she and Alex are together a more self-assured young woman emerges, a sex kitten in the bedroom and someone willing to go toe to toe with Alex.  I enjoyed watching these two, loved their crackling emails that took on a feeling of foreplay, and was completely captivated by their steamy journey to HEA.


From the first page to the last this romance was an utter delight!  With a likable main couple whose banter teemed with sexual tension, while bringing humor into and out of the bedroom, this was a romance that I never wanted to end.  It was a slow-burn bringing Alex and Emilia together, a journey where their thoughts and hearts were on unvarnished display and it warmed my heart.  Alongside this sweet and sexy couple was an equally entertaining cast of secondary characters, some who readers have seen before and some new ones too.  I was thoroughly entertained by the reappearance of Alex's friends, Shane and Nico, heroes from the previous two books set in this world and who are loving married life.  There's playful banter between the three men, a sense of brotherhood that endeared them to me while I inhaled every interaction between them.  Alex's son Ryder also made himself a special place in my heart!  He was a smart and funny little boy, wise beyond his years when it came to matters of the heart between his dad and Emilia. He had a big heart too, an infectious spirit that made me smile whenever he was on scene.  His matchmaking talent was charming and sweet and it helped bring the three of them together as a family. Emilia's flamboyant roommate Franklin was another highlight as he jumped off the page with his brash nature and devil may care attitude. He was a great support to her, pushing her when needed, while hugging her when she needed it most.  Every character and every heartfelt emotion made this a wonderful romance that I'm still thinking about long after The End.  It was an immensely satisfying romance that pushed every one of my emotional buttons and it has me excited for what Ms. Loring has planned next! 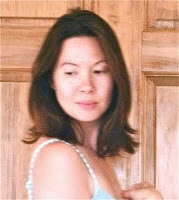 Before writing steamy romantic comedy novels, Kayley Loring got a BFA in creative writing from a Canadian university and had a fifteen-year career as a screenwriter in Los Angeles (under a different name). She mostly wrote PG-13 family comedies that studios would pay her lots of money for and then never make into movies. In 2017 she decided to move to the Pacific Northwest and write about all the fun stuff that she wasn't allowed to write about in those PG-13 scripts. Now she’s breathing cleaner air and writing dirtier words. It’s an adjustment she’s happily getting used to.