The future of wolves brings together two people of differing viewpoints in a timely political tale teeming with romance.  Keep reading to get a tempting taste of Wild Cowboy Country by Erin Marsh, then add it to your bookshelf.  In honor of this first installment in a brand new series make sure to fill out the form below for the chance to win 1 of 5 copies of this book too! 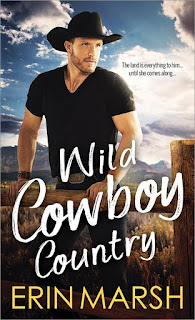 Who has more right to the land?
Park ranger Lacey Montgomery and rancher Clay Stevens are on opposite sides of a thorny issue. Lacey has spent her career reintroducing wolves to Rocky Ridge National Park and now oversees the welfare of the pack. Clay has struggled for years to make a success of the historic ranch he inherited and is tired of losing his calves to predators.
When Clay’s teenage nephew and his friends carelessly endanger a wild wolf and her pups, Clay and Lacey’s lives collide. They shouldn’t be so attracted to each other—she’s a hometown girl beloved in the community, while he’s still regarded as a city-slicker interloper.
But Clay’s piercing blue eyes make Lacey’s pulse race, and her sweet face and kissable lips are drawing him under her spell, much as he tries to resist...
Opposites attract, but the terrain between them is awfully rough...

Two-time Golden Heart® Finalist Erin Marsh credits her childhood family road trips in her grandparents’ Grand Marquis with opening her imagination and exposing her to the wonders of the United States. The lessons she learned then still impact her writing today. She lives with her husband and daughter near Pittsburgh, Pennsylvania.