Book Spotlight on In Deep by Blue Saffire (GIVEAWAY)....

A past love is rekindled in this sensual and suspenseful tale set amongst the world of undercover policing that will have readers on the edge of their seats.  Keep reading to get a tempting taste of In Deep by Blue Saffire, then add it to your bookshelf.  In honor of this second installment in The Blackhart Brothers series make sure to fill out the form below for the chance to win 1 of 5 copies of the first book in this series too! 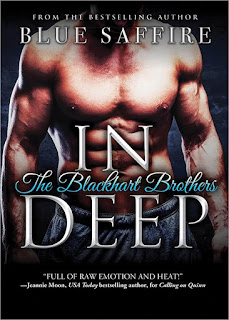 I’ll do anything to protect what’s mine...
The last thing I needed was a call from my old precinct letting me know my knucklehead nephew had been picked up for skipping class. Still, I figured it would be an in-and-out visit. Quick. Simple. But the moment I heard her voice, I should’ve known it would be anything but easy.
I wasn’t expecting the feelings that came roaring back the moment I laid eyes on the saucy detective with the gorgeous smile, but I probably should’ve seen it coming. Our history is one for the books, and it's a page-scorcher. And now here she is, standing in my way, and I can’t seem to remember why I ever let her leave my side.
It looks like the sparks between me and Detective Danita Moralez are as intense as ever, but she’s also more guarded than before. Two years ago, she walked out of my life because she wasn’t willing to reveal the dangerous truth about her undercover work. This time, she’s not going to get away so easily.

“Man, we miss having you and Quinn around here,” Stevens says beside me.
I hear him, but I’m too busy following Moralez with my eyes. She’s gorgeous. Smart and sexy. I love it.
Cal talked about her bust the entire ride here. You would think he had some part in her victory. I don’t know what I was expecting, but the woman I’m staring at isn’t it.
Her tight blue jeans hug her hips with the affection of a long-time lover. Those sexy heels on her feet have me tilting my head to the side as I study her. Damn, the sway of her hips is perfection. I noticed earlier that she has a great pair beneath that T-shirt.
Her voice hit me in my gut from her first word. That smoky rasp is seductive in its own right. Soft, yet a bit hoarse.
Her warm, deep-brown skin is a rich espresso tone. Her eyes are the color of amber whiskey, quite the contrast to her skin. Her dark hair is pulled back in a tight bun.
I can’t help wondering what her locks look like down. Would they fall in her face as she looks at me beneath her? From the waves in the strands brushed from her face, I bet it’s wavy when it’s loose.
Her last name is Moralez, but she looks like she could be of mixed heritage. Not that I’m naive enough to think she couldn’t be fully Latinx. My trips to Puerto Rico, Cuba, and the Dominican Republic alone have taught me better than to make that assumption. Which is why I want to get to know her better. I want to ask questions and find out all about her.
“You know that’s not going to happen, right?"
I turn to Jennings, another of the good guys around here. “You think not?” I say with a grin.
“I know not. She’s been around here for what? Two or three years. Not one guy, or girl for that matter, has been able to bag her. Forget it."
“Just because you failed doesn’t mean I don’t have a shot."
Stevens groans beside me. “I don’t know. I’m with Jennings on this one. You don’t stand a chance. At first, I thought it was a cop thing. You know, like she was against dating one of us. Then I thought it was a White, Black thing, but I’ve seen her turn down everyone. White, Black, Hispanic, male, female, cop, lawyer, bartender. She’s a closed case."
“Are you assholes sure she’s single? I didn’t see a ring, but that means nothing,” I think out loud.
“I thought that too,” Jennings says. “We were partners for a little bit. Before I moved to the special unit. It’s just her and her dog. She’s single, single."
I sit back and think on that. It’s not enough to deter me. I want her to tell me she’s not interested. From the vibe I got from her earlier, I don’t think I’m up for as big a challenge as these guys think.
“Good luck,” Stevens says.
“I got twenty that says he crashes and burns,” Jennings snorts, slapping a twenty on the table. “What do you say, Kev? You think you can win me a twenty?” Stevens says to me.
“You should double the bet,” I say as I watch Moralez and all her sexy curves disappear into the ladies’ room.

ABOUT BLUE: As a young girl, Blue’s mother introduced her to the world of love and music through movies, but once she got her hands on books, an author was born. With more than thirty contemporary romance novels and novellas under her belt, she’s now an award-winning, bestselling author. She lives with her husband on Long Island.
Visit the author at her website HERE.