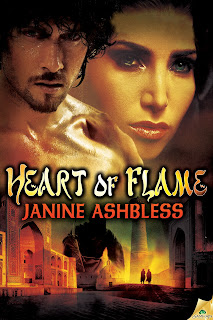 Heart of Flame by Janine Ashbless
And on the One-Thousand-and-Second night, Scheherazade told this story…
By day, Taqla uses her forbidden sorcery to move freely about the city of Damascus in the guise of an old sage. Her true identity known only by her faithful servant woman, Taqla is content with the comfortable, if restrictive, life that keeps her safe from the control of any man. Until she lays eyes on a handsome merchant-traveler. Suddenly her magical disguise doesn’t rest so easily on her shoulders.
When long-time widower, Rafiq, hears that the Amir’s beautiful daughter has been kidnapped by a scheming djinni—and that she will be given in marriage to her rescuer—he seeks the help of “Umar the Wise” to ensure he will be that man. Yet as he and the disguised Taqla set off, he senses that his prickly male companion is hiding something.
In a moment of dire peril, all of Taqla’s secrets are stripped bare—her fears, her sorcery and, worst of all, her love for Rafiq. Yet the princess’s life hangs in the balance, and there is no running away or turning back. Even though passion may yet betray them all...
Warning: Scary monsters and creepy ruins in the desert—check. Pagan gods that demand blood-sacrifices—double check. A handsome hero who looks good in a robe and even better out of it—oh yeah. Check, check and check. That’s worth a heroine dropping a veil or two.
EXCERPT:
“What manner of painting?” the Amir asked.
“Ah,” said the artist. “The boast of this scroll is that upon it are depicted all the most beautiful things that exist in the world, without exception.”
“Then it must include the Great Mosque here in Dimashq,” said Jamil with a little smile, “and my own daughter.”
“So it must.” The artist lifted the scroll over his head and let it unfurl all the way to his feet.
“Vizier?” The Amir was too dignified a person to get up and squint at a picture himself, so his highest official did the honors for him. He bent and peered at the middle ground, his brows furrowed.
“Where do you start? There is so much detail—cities, bridges, people. Oh—there! Yes, there it is!” He pointed at the scroll. “It’s the Great Mosque of Al-Walid! I see the minarets and the shrine of the head of John the Baptist! Such detail! You can even see the mosaics on the inner walls!” His expression of pleasure warped. “That isn’t possible. You could not paint such fine detail. And the trees there, the water—they’re moving!”
“The picture is magical,” said the artist, as if the vizier were a simpleton.
“Is it safe?” Jamil asked, frowning.
“It is only a picture, oh father of wisdom. Do you not wish to see if your daughter is depicted among the most beautiful things in the world?”
Jamil’s frown deepened.
“I will,” Ahleme said quickly. She itched to see the marvelous painting, and that it might include her made it irresistible.  She sprang to her feet.
* * * * *
Belatedly she plucked the jabbayah headscarf she wore around her shoulders and pulled it over her head, wrapping it to veil her lower face. Because, of course, the word that had revealed the true form of the ghouls had torn her magical disguise to shreds too.
Rafiq uttered a harsh laugh. “Why bother with that?”
“Don’t look at me.” She averted her face.
“Not a man at all then. A witch.”
Taqla clenched her teeth.
He laughed. “I knew, you realize. I’ve known—I’ve guessed—for a couple of days.”
“What?”
“You talk in your sleep, you know. With a woman’s voice.”
Taqla’s jaw dropped. How was she supposed to have guessed she did that? “What did I say?” she stammered.
He gave her a guarded look. “Nothing clear enough to make out. But your voice is female. And once I noticed that…well, there were other things that catch the attention. You don’t make eye-contact when you talk, you don’t like to stand too close—and no offense, but you fight very dirty, like a woman does.” His eyes were as hard as a sword-edge. “I took you to the bath-house to make sure, but after that I thought that if it’s a disguise, it’s a very good one. Magic.” He said the word like it stained his mouth.
Taqla bit her lip.
“You’re the girl from the empty house, aren’t you? The watchman’s trull. I recognize that glare.”
* * * * *
A thin, high wail cut into their ears. They both froze, and Rafiq lifted his head. Taqla saw the color drain from his face.
“What’s that?” she asked.
“I think it’s the djinni killing Ahleme,” said he.
There was another noise, a roar, like a lion upon a desert horizon. Snow sifted down from the steep walls of the ravine at its note. Then a howl harsher than a falcon’s made Taqla’s blood curdle. The two, roar and howl, rose together in a cacophony.
“And that?” she gasped.
“That’ll be the other djinni.”
“There are two?” She struggled from beneath him into a sitting position.
“Apparently so.” Rafiq knelt up. “One wanting to sire his children on her, one wanting to stop it.”
The first thin scream echoed out again.
“They’ll tear her in half.” Taqla scrambled to her feet. “Come on. We have to try and save her, at least.”
He sucked his cheeks, but nodded and joined her standing. “How do we get there?”
“Like this,” she said, gritting her teeth and stepping away to give herself room. Then she changed shape. Not smaller than her own form, this time, but much bigger. It didn’t hurt so much as shrinking herself, but it hurt enough to make her cry out. The sound was musical as it left her throat. She shook out her copper-colored feathers and clawed at the snow, a perfect facsimile of the Senmurw-bird.
“In the name of God!”
“Get up on my back,” she fluted, “and hold tight.” 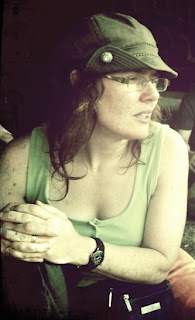 Janine loves goatee beards, ancient ruins, minotaurs, trees, mummies, having her cake and eating it, holidaying in countries with really bad public sewerage, and any movie or TV series featuring men in very few clothes beating hell out of each other. She’s a roleplaying geek and can still sometimes be found running round in the woods hitting other geeks with a rubber sword. It is unlikely she will grow up anytime soon.

Janine lives in Yorkshire, England, with her husband and two rescued greyhounds, and is trying hard to overcome her addiction to semicolons.


**********GIVEAWAY**********
Giveaway is for a PDF copy of Janine's previous fantasy/erotic romance novella, The King's Viper
-Giveaway is OPEN TO ALL.
-To be entered just leave a comment below, along with your email addy.
-One winner will be chosen randomly from all comments made throughout the entire tour, so the more tour stops you comment on, the greater your chances of winning.  For a list of tour stops go here.
-Giveaway ends at 11:59 PM CST on 1/13.
at January 04, 2012