Book Cover Reveal for Show Me the Way by A.L. Jackson (GIVEAWAY)

Ms. Jackson has become a favorite author of mine for her emotionally intense and sensual romances that put readers through the wringer alongside her characters in unforgettable tales.  Her upcoming release promises more of her intense storytelling and has me looking forward to this new series starter.  Keep reading to get a tantalizing taste of Show Me the Way by A.L. Jackson, with its tale of an emotionally bruised single dad falling for the woman next door despite all the issues surrounding their being together, then drool over this book cover while waiting for its October 2nd release date.  In honor of this first installment in the Fight for Me series make sure to fill out the form below for the chance to win 1 of 5 signed copies of this book too! 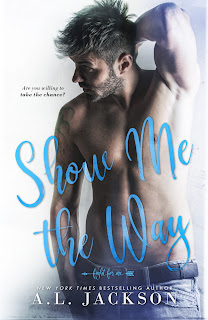 Rex Gunner. As bitter as he is beautiful.
The owner of the largest construction company in Gingham Lakes has been burned one too many times. His wife leaving him to raise their daughter was the last blow this single dad could take. The only woman he’ll let into his heart is his little girl.
Rynna Dayne. As vulnerable as she is tempting.
She ran from Gingham Lakes when she was seventeen. She swore to herself she would never return. Then her grandmother passed away and left her the deed to the diner that she once loved.
When Rex meets his new neighbor, he knows he’s in trouble.
She’s gorgeous and sweet and everything he can’t trust.
Until she becomes the one thing he can’t resist.
One kiss sends them tumbling toward ecstasy.
But in a town this size, pasts are bound to collide. Caught in a web of lies, betrayal, and disloyalty, Rex must make a choice.
Will he hide behind his walls or will he take the chance . . .

BE NOTIFIED OF ITS RELEASE ON AMAZON here.

PRE-ORDER A SIGNED COPY OF THIS BOOK here.

A.L. Jackson is the New York Times & USA Today Bestselling author of contemporary romance. She writes emotional, sexy, heart-filled stories about boys who usually like to be a little bit bad.
Her bestselling series include THE REGRET SERIES, CLOSER TO YOU, and BLEEDING STARS novels. Watch for A.L. Jackson’s upcoming novel, SHOW ME THE WAY, the first stand-alone novel in her brand-new FIGHT FOR ME SERIES.
If she’s not writing, you can find her hanging out by the pool with her family, sipping cocktails with her friends, or of course with her nose buried in a book.
Be sure not to miss new releases and sales from A.L. Jackson - Sign up to receive her newsletter HERE or text “aljackson” to 24587 to receive short but sweet updates on all the important news.