Ms. Ryan's Montgomery Ink series is a favorite of mine because of its drool-worthy heroes and the strong-willed women who love them.  This upcoming eighth installment brings readers a romance full of complications as a man tries to keep from falling for the woman who once belonged to his brother.  Keep reading to get a tempting taste of Inked Memories by Carrie Ann Ryan, then count down the days until the October 31st release date! 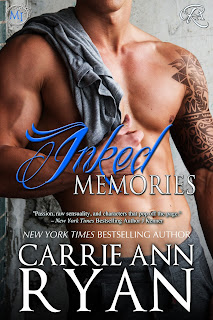 The Montgomery Ink series by NYT Bestselling Author Carrie Ann Ryan continues when the final Denver Montgomery sibling refuses to fall for his brother’s former flame—the company’s new plumber.
Wes Montgomery watched his entire family fall in love, and now finds himself ready to settle down. Except the one person he seems to find chemistry with is not only his twin’s ex, she also works for Montgomery Inc. But when the two find themselves in one compromising situation after another, Wes realizes he’s having second thoughts about the dynamic woman who’s burst her way into his life. Sure she sets off his temper, but she also makes him hot in every other way possible.
Jillian Reid never loved her best friend like everyone thought she should, so she pushed him away so he could have his future. Now, despite fighting it, she finds herself attracted to the one man she shouldn’t. When her father’s health takes a turn for the worse, and a danger no one saw coming show its face, she’s forced to turn to Wes for help. The two of them have fought off their attraction long enough, and each cave to the desire. But this enemies-to-lovers tale might have an ending no one ever dreamed of.

FUN & GAMES WITH THE CHARACTERS OF THE MONTGOMERY INK SERIES....

FIND OUT WHO'S YOUR IDEAL MONTGOMERY INK HERO here.

FIND OUT WHICH MONTGOMERY INK HEROINE YOU ARE MOST LIKE here.