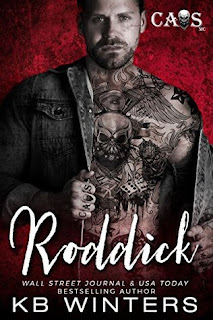 I swore an oath to live and die by my club...
And it's the club life that'll kill me. Or Baz's sweeter-than-candy little sister, Cherie, who's supposed to be hands off.
There's an unspoken promise among brothers.
The rules are simple. You don't sleep with another member's little sister.
I might be the club president, but I don't play by any man's rules. I want her. And I'll have her.
All. Night. Long.
Forever.
In my arms. In my bed. In my heart.
She may be forbidden fruit, but she's got a cherry just for me.

It's a sexy and fast-paced ride as the President of the CAOS MC finds himself working with the Feds to bring down a drug lord.  Add in his complicated feelings for the younger sister of his best friend and Roddick soon finds his life careening out of control.  Readers will find themselves quickly consumed with this third installment in the series that reunites us with the sexy and protective men of the CAOS MC as they continue on their path to being white knights on motorcycles.

Roddick's lived a life on the edge and has the scars to prove it, but that's all he has as he's devoted his life to his Club.  As other brothers continue to find their soulmates he's starting to realize just how lonely his life is as longings he's long kept hidden start bubbling to the surface.  He's always been protective of Cherie, especially after her brother gave her into the Club's keeping, and watched with confused emotions as she grew into adulthood.  But there are some lines you just don't cross and his friendship kept holding him back, as does their twenty year age difference.  Despite those boundaries theirs has always been a relationship full of flirtiness mixed with sensually-charged banter.  But Cherie's become too much of a temptation and soon he's turning words into actions.  With the clock ticking on his showdown with a dangerous drug lord Roddick becomes even more determined to claim the young woman who's always held a piece of his heart as both of their lives are put in jeopardy by an unexpected villain.  Roddick's a delicious hero who is far from the typical biker.  He and his Club are truly the good guys and their noble deeds endeared them to me.  Roddick knows all the reasons he shouldn't be with Cherie but when he finally commits to her he's all in.  He's sweet, caring, and quick to admit when he's wrong which made him even more of a decadent delight and I'm still dreaming of him.

Cherie's always been a part of the Club as she was left in their keeping after losing her parents and her brother went to war.  They became her family and taught her how to protect herself and helped her through the awkward stages of growing up.  When it came to boyfriends they were overly protective which has left her with very little experience when it comes to the bedroom.  She instead has vast experience with guns, wounds, and war as the Club hasn't always been on the straight and narrow.  It's come in handy though in her career as a nurse.  When it comes to love she's thought of no one else but Roddick.  He's always been the one she's dreamt of but has always felt like a little girl in his presence as opposed to the woman she wants him to see.  With her frustration reaching the breaking point, she decides to leave it all behind...the Club and the danger surrounding it, along with Roddick and his conflicted feelings.  Before she can though she'll end up a pawn in the battle between the Feds and a dangerous drug lord where blood will be spilled.  Cherie's a hard worker, strong-willed, and more than capable of taking care of herself.  She's always been attracted to Roddick and knows that no one will ever equal him.  With her time in town ending, she fully embraces the erotic interludes Roddick offers her even though she doesn't see a future for them.  She's more than a match for him and I enjoyed their sexy banter and her giving as good as she got.

*I got this book from the author for review in exchange for my honest opinion.
at August 09, 2017