Ms. Bennett has become one of my go-to authors when it comes to erotically-charged romances and her Wicked Horse series always turns up the heat when I need it most.  With this latest release, featuring the theme of friends to lovers, I've once again fallen in love and I hated to reach The End.  Keep reading to get a tantalizing taste of Wicked Wish by Sawyer Bennett, along with my impressions of it, then add this second installment in The Wicked Horse Vegas series to your bookshelf! 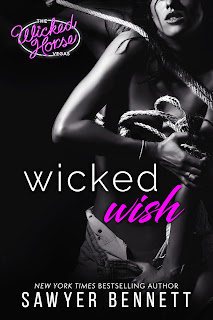 Jorinda Pearce thought she did everything right – graduated from college, married her long-time sweetheart, established a career. But what does she have to show for it now? A degree she doesn’t use, a job she hates, and an ex-husband that broke her heart.
Looking for a long overdue adventure, Jorie takes a walk on the wild side and attends a masquerade event at The Wicked Horse Vegas. It’s exactly the escape she’s looking for, and even better, she can explore anonymously. Drawn to the man masked in black leather with the body of a god, Jorie finds the greatest pleasures of her life at the hands of a stranger.
Walsh Brooks is the most sought after man in The Wicked Horse. Sex is nothing but a game to him and he’s the type that will always leave at the end of the night without looking back. Unfortunately for Walsh, there’s no way he can walk away from the mysterious green-eyed beauty behind the mask of sapphire feathers, because he knows exactly who she is.
Jorie is his best friend’s little sister and there’s not another woman in the world that’s more off limits. 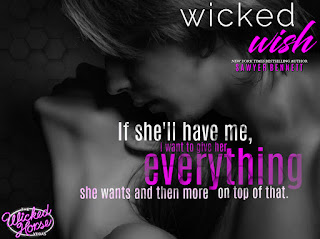 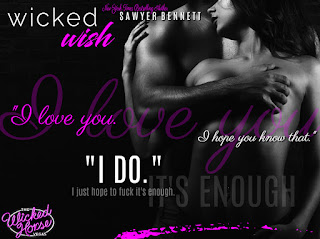 Walsh Brooks has been a part of the Pearce sibling's lives since he was young. He was best friend to Micah and protector to Jorie and felt a sense of obligation and loyalty to them both.  Therefore his increasingly erotic feelings for Jorie were just something he had to keep hidden for the sake of his brotherly bond. When a painful event created its own bond between Walsh and Jorie things changed between them irrevocably and would form the basis for their deep-seated connection years later.  With a defunct marriage and a successful casino business making him wealthy Walsh feels as though he has it all.  So what if his close friend is happily married and espousing the joys of it..he has an endless smorgasbord of sexual delights to experience.  The night a masked woman catches his attention though brings back feelings he hasn't felt in years and has him questioning everything he thought about sex and commitment.  With Jorie back in his life he discovers what happiness really means, but with feelings of guilt and disloyalty weighing on him, will he claim her forever or push her out of his life once again?  Walsh is a delicious hero who unabashedly embraces his diverse sexual appetites.  With some he may appear cool, but with those closest to him he's charming and kind.  His sense of loyalty to his friend causes him much angst in being with Jorie, but when it comes to her he'd do anything to see her smile.  He's a sexy beast who's dominant but playful and helped Jorie reclaim her self-esteem after she'd been left reeling.  His Grand Gesture at the end endeared him to me and has me dreaming of him still.

Jorie Pearce is a woman on a mission after being told by her husband she was bad in bed.  With her self-esteem bruised she heads to the Wicked Horse where every erotic fantasy can be found and where she finds herself reunited with the young man that was once her savior and her never-ending crush.  Their reunion is combustible and leaves her wanting more, but with his honor at stake she'll do whatever she has to to tempt him into more.  With their connection deepening the lies soon start to take their toll.  When the truth finally does come out she'll be left torn between her past and the future...unless she claims the one person able to give her a real HEA.  Jorie's an immensely likable woman whose life didn't go exactly as she planned.  She's left full of doubts regarding her sexuality and Walsh is just the man to build her back up as seen through their numerous erotic encounters.  Her bond with her brother Micah was heartwarming while her bond with Walsh was complex as it combined friendship with love and protectiveness.  Her being caught between them over her and Walsh's relationship was heartbreaking as well and contributed to her indecisiveness when her past comes back into the picture.  Jorie's a strong-willed woman for the most part and while I enjoyed her verbal banter with Walsh I was frustrated by her decision late in the book that made her look needy.  Despite that one moment of weakness she was a heroine worth rooting for and I enjoyed her and Walsh's journey full of fun, flirtiness, and off-the-charts eroticism. 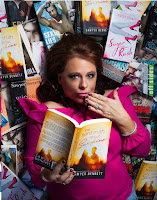 Since the release of her debut contemporary romance novel, Off Sides, in January 2013, Sawyer Bennett has released more than 30 books and has been featured on both the USA Today and New York Times bestseller lists on multiple occasions.
A reformed trial lawyer from North Carolina, Sawyer uses real life experience to create relatable, sexy stories that appeal to a wide array of readers. From new adult to erotic contemporary romance, Sawyer writes something for just about everyone.
Sawyer likes her Bloody Marys strong, her martinis dirty, and her heroes a combination of the two. When not bringing fictional romance to life, Sawyer is a chauffeur, stylist, chef, maid, and personal assistant to a very active toddler, as well as full-time servant to two adorably naughty dogs. She believes in the good of others, and that a bad day can be cured with a great work-out, cake, or a combination of the two.