Book Blitz for The Boy I Hate by Taylor Sullivan (GIVEAWAY)

Enemies to lovers drives this romance of a cross-country trip between two people whose reunion awakens them to unspoken feelings from the past that could lead to heartfelt truths that will change the connection between them and others forever.  Keep reading to get a tempting taste of The Boy I Hate by Taylor Sullivan, then add this New Adult romance to your bookshelf.  In honor of this standalone romance make sure to fill out the form below for the chance to win a $25 Amazon GC too! 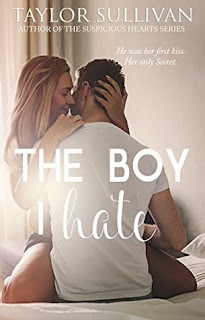 Samantha Smiles and Renee Montgomery have been best friends for over a decade. They’ve shared laughs, secrets, and a mutual hatred for one person: Tristan Montgomery, Renee’s older brother. He was the guy every girl wanted, and every guy wanted to be, and it wasn’t uncommon they’d befriend his little sister just to get closer to him. Which was exactly how Samantha became Renee’s saving grace. She was the only girl Renee could trust not to fall in love with her older brother.
Until the one night Samantha spent with him alone, leaving her questioning everything she’d ever known about the blond headed heart-throb.
Years later, Renee asks Samantha to be her maid of honor. With no other option, Samantha is forced to drive cross-country with the focus of their teenage ire.
He was her first kiss.
Her only secret.
Can Samantha survive the trip cross-country with the reckless Tristan Montgomery? The guy who did what he wanted, whenever he wanted, without worry for tomorrow? Or will she discover a different side of him. One that’s sweet, funny, and maybe a little bit vulnerable. And fall completely and helplessly in love for the first time in her adult life with the one man who could cause her to lose her best friend forever?

She looked down to the parking lot, seeing his Mustang still parked below, and knew she was about to lose it. She headed for her own room, placed the breakfast on the nearby table, then rid of every last drop of patience, began pounding on Tristan’s door.
“Wake up you lazy bastard! Wake up, or I swear to God I’ll beat this door down with my fists."
A large boom sounded from inside the room, and Samantha smiled with satisfaction as she continued to pound. “That’s right,” she whispered. “Get up you lazy ass--"
But before she could finish her sentence, the door was yanked out from under her. She stumbled forward, barely able to catch her footing, and slammed face first into warm, solid, skin.
She froze, because the glimpse she caught on the way down wasn’t one she ever thought she’d see. It was a very large, very bare, and very “Good morning” version of Tristan Montgomery.
“Please tell me you’re not naked,” she whispered, but it was mostly to herself, because she didn’t really need him to answer. She squeezed her eyes shut, took one step backward, and turned around.
They both stood there, quiet and still, and she tried to recover her heart. The sight of Tristan in nothing more than his birthday suit left her feeling dizzy. She’d seen many naked men in her days, though until now, the only one she’d seen in person was Steven. Especially this close up.
“Well?” he finally asked, when she remained silent.
Well? Well… Tristan was much…larger than Steven. Much larger in every way imaginable.
She cleared her throat, knowing her voice would’ve cracked otherwise. “It’s ten in the morning,” she answered with more confidence than she felt.
“And?” But his voice was thick and husky, and she could swear he was having as difficult a time recovering as she was.
“It’s time to go."
“Is it?"
“Yes,” she said, hating how the tone of his voice sent a shiver down her spine. “And you should really put some clothes on. The people of Utah don’t want to see…that."
He chuckled, but shifted slightly behind her. “Hate to break it to you sweetheart, but a lot of people want to see that."
She cringed, because she knew it was true. Like in high school, she knew women lined up to catch the barest glimpse of Tristan.
He moved quietly behind her, his steps so soft you’d never know they came from a man of his size. “You can turn around now."
She raked her teeth over her bottom lip, taking the very corner and chewing it before turning to face him. He still had no shirt on, his feet were bare, but he wore a pair of old gray sweats resting so low on his hips you could tell he wasn’t wearing anything underneath.
“Aren’t you freezing?” she asked, feeling a shiver run through her own body.
“No,” he said, leaning against the doorway and crossing his feet at the ankles. A tiny grin teased at the corner of his mouth, and she knew he was having too much fun at her expense.
She turned toward the Mustang, not attempting to hide her irritation. “I brought you breakfast,” she said quickly.
“That’s nice of you."
“It’s not nice. Just my way of getting your lazy ass out of bed."
He threw his head back with laughter. “Are you always this pleasant in the morning?"
Pressing her lips together, she wasn’t about to let him to pull her into another argument. “We need to go,” she said, turning on her heels and opening the door to her room.
She walked inside, hoping the action would give him the hint to do the same. “I’ll have your breakfast waiting for you in the car.” But before she closed the door, she could swear she caught him smiling.
“My God.” she whispered, resting her forehead against the wall, taking in all the air she’d forgotten to take over the last two minutes. “Three more days. Just three more days of Tristan Montgomery.” She repeated the last words over and over, gathered up the rest of her belongings, and headed for the car. 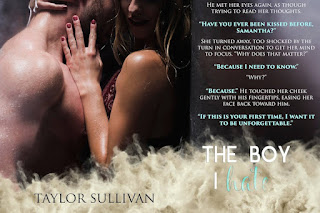 Taylor is mom of three young (or not so young) children she loves more than life. She runs them around endlessly, hoping she looks presentable enough to be out in public, and day dreams about fictional characters. Maybe she's crazy, or maybe she craves the barbie games she played as a little girl a little too much, but that's where her stories are born. It's where they blossom, and grow, and eventually breath life on the page of her stories.
She'd love to hear from you. (Or I'd love to hear from you. I wrote this in 3rd person to sound cooler.)