Readers will find themselves captivated by this erotically-charged tale set in a world of danger as a mafia man tries to re-claim the woman who ran away from him and into the arms of a man just as dangerous, but who swears to protect her no matter what.  Keep reading to get a tempting taste of Grind by Sybil Bartel, along with my impressions of this intense read, then learn even more about this book by visiting the other sites hosting this tour.  In honor of this third installment in the Thrust series make sure to fill out both forms below for the chance to win an Amazon-gifted copy of the first book in this series as well as the chance to win a $25 Amazon GC too! 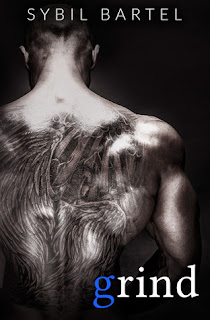 Dane
I’m silent. I’m trained. I’m lethal.
My hand skimming down your thigh, my gaze a weapon—I know more ways to kill you than please you.
But you’re not paying for my aim. You’re paying for my control. Bringing you a breath away from ecstasy, watching you beg as I hold back your release, I’ll show you exactly what you’ve been missing. Your hunger is my currency and five thousand is my price. I only have one rule—no repeats, because I’m not for keeps. I’m for sale. One slow grind and I’ll give you exactly what you paid for.

Readers will find themselves on a roller coaster ride of emotions with this erotically-charged tale teeming with suspense as two bruised souls find comfort, acceptance, and a place to call home in each other's arms.  It's a tale that's atmospheric, a tale that shows readers the depravity of some men's souls, but ultimately gives us hope.  On a whole it's a tale that kept me on the edge of my seat from start to finish and leaves me wanting more as there's lots of intrigue left to explore.

Irina was once naive to the ways of the world until a chance meeting introduced her to the devil.  A promise of wealth and ease soon took Irina down a dark path she never planned on, a path teeming with degradation that had her closing off her heart and soul.  For five long years she allowed herself to be controlled, to have every aspect of her life dictated by a vile man who traffics in using and abusing women.  One night though the degradation goes too far and has her running for her life right into the shelter of a man just as dangerous as who she's running from.  The promises Dane makes are tempting and with one soft touch he reawakens her heart.  Feelings long buried rise to the surface and have her thinking of the future instead of being haunted by the past.  But with her new life in jeopardy Dane must ride to the rescue once again if they have any hope for HEA in a romance that races to a heart pounding conclusion. Irina's clearly lost at the start of the story, beaten down both physically and emotionally, which makes it difficult to warm up to her.  To protect herself she erected a harsh and stoic facade that Dane slowly brought down through his care and compassion.  Being with Dane gave her a glimpse of unconditional support and that affection can be given without expectation.  It's moments like that, ones where she showed a bit of uncertainty in her concept of love, that made it easier to connect to her.  She'd experienced the worst life had to offer and seeing her finally rise above it had me cheering for her.

Dane Marek's a delicious hero!  A former Marine who once killed for God and Country, now kills for wealth.  It makes for a lonely life though, one where he just goes through the motions, finding no comfort or anything worth dying for. Meeting Irina changes his life irrevocably and gives him a glimpse of something worth fighting for.  Seeing another just as bruised by life as he brings out all his protective instincts and with each word and deed he builds her back up from the hell her Russian master put her through.  Theirs is a combustible connection that pushes both of them to their limits.  Not since his ex-wife left him has he felt the need to find comfort with another woman, but with Irina he finds acceptance for all the dark deeds he's done and a warm place to call home after years of coldness.  Dane's a bit rough around the edges early on but caring for Irina brings out a soft side.  His words are erotic at times, full of dirty talk, but at other times he whispers all sorts of sweet words that brought a tear to my eye.  He was always a loner, with only his dog Hunter to count on, but when it comes to Irina's safety he doesn't hesitate in calling in his friends as they wage war against the Russian mob.  From start to finish Dane's an unforgettable hero who took many lives but with Irina he saved her and set her on a path of independence.  On a whole he's sexy and snarky and I'm still dreaming about him.

This was a fast-paced and atmospheric romance teeming with sexual tension and erotically-charged encounters.  From the moment they met Dane and Irina scorched up the pages in numerous, almost too many at times, erotic interludes that brought out moments of dominance from Dane.  Though their relationship evolved from insta-love it quickly took an intense turn where they'd sacrifice all for each other.  Dane and Irina are an unforgettable couple bound through their painful pasts who find a glimpse of heaven in each other's arms.  Helping this couple reach their HEA is a cast of secondary characters, former military men who are strong and supportive when they need each other most, whose mysterious histories I long to learn more about as each is more delicious than the last!  Ultimately, this was a dark and gritty tale touching on the darkness of men's souls, but which gives reader's hope through the connection between Dane and Irina and it held me captive from the first page to the last! 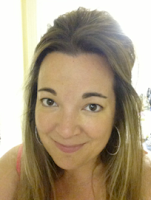 Sybil Bartel grew up in Northern California with her head in a book and her feet in the sand. She dreamt of becoming a painter but the heady scent of libraries with their shelves full of books drew her into the world of storytelling. She loves the New Adult genre, but any story about a love so desperately wrong and impossibly beautiful makes her swoon.
Sybil now resides in Southern Florida and while she doesn’t get to read as much as she likes, she still buries her toes in the sand. If she isn’t writing or fighting to contain the banana plantation in her backyard, you can find her spending time with her handsomely tattooed husband, her brilliantly practical son and a mischievous miniature boxer...
But Seriously?
Here are ten things you probably really want to know about Sybil.
She grew up a faculty brat. She can swear like a sailor. She loves men in uniform. She hates being told what to do. She can do your taxes (but don’t ask). The Bird Market in Hong Kong freaks her out. Her favorite word is desperate…or dirty, or both—she can’t decide. She has a thing for muscle cars. But never reply on her for driving directions, ever. And she has a new book boyfriend every week—don’t tell her husband.