Book Review for Darkness Before Dawn by Leigh Robbins.... 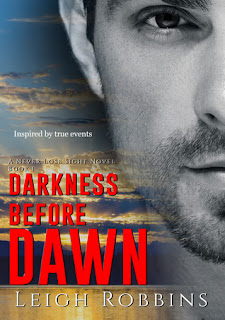 Blinded in Iraq while in the Marines, Matthew Cage never realized the key to unlocking his forever midnight world was within arm’s reach.
Dawn Richards first saw her best friend’s older brother via webcam. For years, she secretly desired him, keeping her fantasies hidden from the rest of the world.
After a downward spiral, Matthew secluded himself in his prison of darkness, but his sister and friends helped him find his way. Having worked hard to become a Master Instructor in Close Quarters Combat, Matthew's world seems normal until tragedy strikes.
When Dawn’s life is threatened, Matthew refuses to let her deal with it alone. Can Dawn trust him to protect her? Will Matthew finally believe he can have sunshine in his world?

From the very first page this book sets itself up to be an epic romance of unrequited love, second chances, and rising above adversity.  Readers are literally dropped into the middle of a firefight that leaves them breathless and on edge and from there they get put through the emotional wringer right alongside these memorable characters.  In a tale that spans years there are numerous highs and lows, moments of intense realism along with bits of melodrama, that all add up to a journey that leaves you exhausted yet satisfied by The End.

Matthew Cage is the typical young Marine who thinks he's invincible, self-assured, with a loving and supportive sister as well as a girl waiting for him back home.  In a single moment though his life is shattered when an IED explodes leaving his face and body burned along with taking his eyesight.  It's a moment that takes his life in unexpected directions while breaking him down and ultimately lifting him back up.  Through it all he's surrounded by supportive friends, his loving sister Lauren, and also unbeknownst to him is the unrequited love of Lauren's best friend Dawn.  He has only a vague remembrance of her but as the years go by he comes to see her as someone he can't live without.  For so long his life was depressingly dark as feelings of loss and guilt weighed on him, but being around her brings him light.  After he returned home he used alcohol to numb the pain and became a man who felt he had nothing to offer, but with Dawn in his life he strives to be a man worthy of her.  Just when it seems as if everything is going their way tragedy strikes and leaves their HEA hanging in the balance.  Matt's a flawed but likable character.  He's sexy but feels unworthy after his accident and makes a bad decision based on desperation.  When hitting rock bottom he hurts Dawn but admits his mistakes and makes grand gestures in winning her back which endeared him to me.  The handling of his blindness was done respectfully and realistically.  The author depicted all the daily obstacles, all the logistics of living independently, of coping as a blind person which I very much appreciated as I'm a disabled person myself.  As the story progresses Matt becomes a true hero, fighting for the woman he loves, while accepting help when he needs it to keep Dawn safe.  He becomes comfortable in his own skin and the journey he took to get to acceptance was an empowering one.

From the moment Dawn saw Matt on the computer screen talking to Lauren she was smitten.  Fate though kept driving a wedge between her fantasy of making him hers and the unfortunate reality of him taking years to notice her as someone more than Lauren's best friend.  He became the man of her dreams as she struggled to move on from her unrequited attraction.  A few bad dates, a clandestine moment that led to heartache, all led to a roller coaster love life that ended with an obsessed police officer wanting to make her his.  Just when she and Matt put all their painful pasts behind them to forge a romantic connection readers will be left with their hearts ripped out by the degradation Dawn is put through as well as the feelings of helplessness Matt experiences over it.  It's a moment that could bring them closer together or break them completely and it kept me on the edge of my seat.  Dawn starts off as an energetic young girl with stars in her eyes but as the story progresses she seemed to lose her self-confidence a bit.  She became much more weepy as the story went along and made some silly choices.  She needed to take a stronger stand and I never stopped rooting for her to do so.  When it comes to Matt, she never defined him by his blindness, never saw him as anyone other than the man she's loved for years.  She's supportive of him and his most loyal cheerleader alongside Lauren and it made me like her all the more.

On a whole this is a powerful story that's not perfect, but it is captivating as it deals with serious issues.  It shows readers the darkness in a wounded warrior's soul as he copes with the remnants of war, shows us the high cost to be paid.  It's a heartbreaking story at times but with moments of sweetness and joy too.  The main couple is flawed which makes them even more realistic as they made mistakes but learned from them.  Their connection was a slow burn and full of sexual tension, but very worthwhile as they're beautifully matched in steamy scenes and quiet introspective moments.  Surrounding this appealing couple are a cast of likable secondary characters, foremost among them are Lauren and Matt's war buddy Brett.  Their romance was full of highs and lows, heartbreak and forgiveness, and they deserved more than being relegated to the back burner.  I was intrigued by the snippets we got related to their rocky romance and I'd love to see their story told in a book of their own as it seems equally as epic as that of Matt and Dawn's journey to HEA.  This story went on a bit longer than necessary, threw in some events that frustrated me as they felt too soap opera-ish, but on a whole it was a solid debut work from Ms. Robbins and I look forward to what comes next from this author.

*I got this book from Hidden Gems for review in exchange for my honest opinion.
at August 30, 2017