Book Spotlight on On the Chase by Katie Ruggle (GIVEAWAY)

A woman on the run makes a new life for herself and catches the attention of a heroic cop and his K9 partner in this suspenseful and sensual contemporary romance that will keep readers on the edge of their seats.  Keep reading to get a tempting taste of On the Chase by Katie Ruggle, then count down the days until its September 5th release date.  In honor of this second installment in the Rocky Mountain K-9 Unit series make sure to fill out the form below for the chance to win a Search & Rescue prize pack too! 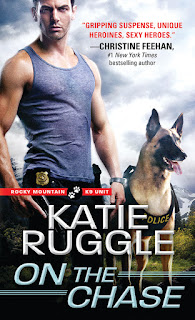 Injured in the line of duty,
His orders are simple:
Stay alive.
But when a frightened woman bursts into his life, Hugh and his K9 companion have no choice but to risk everything to keep her safe.
The sole witness to a horrific crime, Kaylee Ramay flees to the Colorado Rockies to start a new life. There she becomes Grace, a dog kennel employee desperately trying to avoid attention—especially from dangerously attractive K9 Officer Hugh Murdoch.
Because Hugh is tall, dark…and nothing but trouble.
Hugh is anxious to get back in the field after an act of heroism left him warming the bench. Until then, he and his K9 partner Lexi spend their hours teasing the town’s mysterious newcomer. But when their simmering attraction is nearly cut short by a sniper’s bullet, Hugh’s mystery woman must come clean about the secrets she keeps...
Or both of them will pay the price. 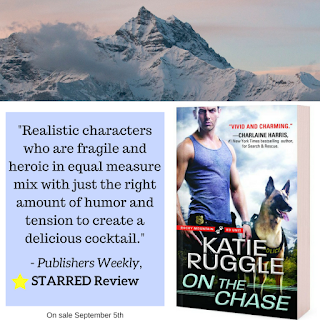