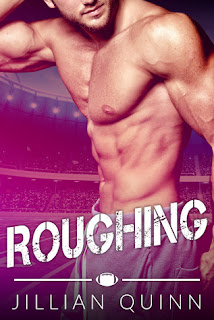 As the star running back for the Strickland Senators, Sebastian Prince knows what it takes to score on and off the field.
Bash has it all—money, looks, women, and the Heisman. But he can’t get the one thing he wants. Two years ago, Bash lost the only girl who ever made him feel something. And he wants her back.
Tori Reynolds hates football. But she hates Bash even more. After a not-so-chance encounter at a game, Bash has another shot with the girl who got away. While Bash might be a different person than before, Tori is hesitant to let him back into her life.
Bash has never turned down a challenge, and when it comes to Tori, he’s willing to go the distance, and this time, he’s not just looking to score.

********************
Two years since that fateful night when lies and jealousy broke up the dream couple has seen their lives change dramatically.  But when star college football player Bash decides he can no longer live without Tori the sparks once again fly.  Though they're trying to start fresh there's still lies and truths standing in the way of their HEA in this scorching and fast-paced romance of second chances.

Bash Prince is royalty in the world of football as his father is a famous former player who's amassed millions.  Because of that everyone wants to either be Bash or get with Bash and though that once appealed to him Tori changed him.  Ever since he met and fell for her he knew they'd be together forever as their connection was crackling. Even when a lie led to her walking away from him he does everything in his power to make life better for Tori.  Since the moment they met he became a better man who eschewed partying and focused on his football future.  Now though he's focused on getting her back.  No longer content to wait for Tori to stop hating him he now jumps at the chance to make her fall for him again.  Despite his love for her though there's a secret he's desperate to keep from her which has him selling his body and soul to a nasty and jealous cheerleader.  If Tori finds out the truth will he be able to keep her from hating him all over again or will the truth of his love for her win out this time around?  Bash is a delicious hero whose money allows him to spoil Tori in scenes that felt like Pretty Woman. With his popularity he could've been arrogant but was far from it. He was kind and caring and quick to call-out his teammates for their bad behavior.  He's also quick to make amends and take care of her when he realizes Tori's been hurt once again.  It all makes for a drool-worthy hero teeming with sensuality who has a talent for dirty talk and who I fell for completely.

Tori Reynolds is opposite to Bash in many ways.  She comes from a family lacking in wealth with only her hard working father to support her.  She's not a fan of football but is instead devoted to her education.  She never expected to fall for Bash, but when she did she became consumed.  Discovering him in a compromising situation broke her though and almost destroyed her chance at graduating.  If it weren't for an unexpected scholarship and months of therapy she never would've recovered, though she's left feeling isolated and the object of stares and whispers.  Since then her embarrassment and anger has fueled her hatred of Bash and though she tries to steer clear of him he works his way back into her life slowly but surely.  Just as it seems that HEA is within their reach truths from the past come back to have her running once again.  Tori's a likable heroine in many ways, unique in her looks and loyal to those she calls friend. She's snarky with a good sense of humor.  She's also proud and adamant about standing on her own two feet.  Her self-esteem is a bit bruised though and she's quick to judge which led to her and Bash's original break-up and weighs on them once again.  Her actions frustrated me at times as Bash didn't deserve the anger she felt for him and her unrelenting fears kept me from enjoying their reunion fully.  Despite this, I still enjoyed their connection and rooted for them every step of the way.

This was a fast-paced, second chance romance set in the competitive world of college football.  All the adoration, glamour, and intensity of the sport and its star players was vividly depicted and had me cheering on the sidelines.  Bash was a dreamy hero who treated Tori like a queen, no matter how angry she was at him.  He spent years trying to win her back in subtle and overt ways and it endeared him to me.  Tori's the kind of heroine you can relate to, the heroine you could be friends with.  Her and Bash are combustible together and though their reunion started off as a slow burn it quickly became erotically-charged.  Numerous scorching scenes were balanced with moments of sweetness that kept me fully invested in their relationship every step of the way and had me cheering Bash's grand gesture at the end.  Along with an appealing main couple there were equally enjoyable secondary characters who were loyal and supportive friends with unique personalities that enhanced the collegiate vibe of the story.  Though there was a roughness to the narrative, and over-the-top melodrama surrounding the jealous cheerleader, I still enjoyed this story for its tale of redemption and the power of love.  Overall it's another winner from Ms. Quinn and I recommend it to fans of sports romances and second chances!

*I got this book from the author for review in exchange for my honest opinion.
at August 20, 2017