Readers have a reason to rejoice this month with the release of these three scorching books that take us from the past to contemporary times with romances of second chances, reunited loves, and a plethora of erotically-charged encounters.  Keep reading to get a tempting taste of these sexy new releases from Lorna James, Tina Donahue, and Laura Jardine, then make room on your bookshelves for these enticing romances from Entangled Publishing! 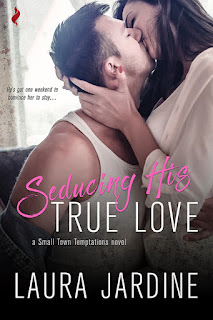 Seducing His True Love by Laura Jardine
Blaine Richards didn’t believe in love at first sight, even when he met the perfect woman. They had an intense, passionate interlude sixteen months ago…and then it was over. Even after all this time, Blaine can’t forget Cassie Monroe. Now, he’s desperate to get her back.
It’s taken more than a year for Cassie's broken heart to heal, but she’s finally ready to move on…when Blaine comes back to town, claiming she belongs with him.
He challenges her to spend a weekend with him, betting she won’t be able to walk away at the end of it. Cassie finally agrees, determined to prove there’s nothing between them but hot sex.
Only, the erotic, no-holds-barred weekend Blaine has planned for her is enough to make a girl change her mind…

Laura Jardine decided she wanted to be a writer when she was in grade two, sometime between writing “The Heart That Got Lost” and “The Land of Shapes”. She later studied engineering and worked as a geophysicist before turning to writing romance novels.
Laura lives in Toronto with her husband, and despite living in Canada her whole life, she hates winter. When she’s not writing, she enjoys cooking, hiking, eating too much gelato, and reading on the balcony when it’s raining. 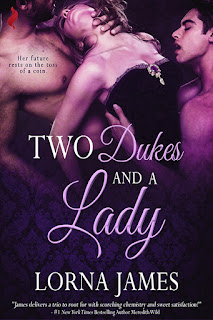 Two Dukes and a Lady by Lorna James
Charles Ashdown, Duke of Densmore, and his closest friend William Kenwood, Duke of Tennison, love gambling and womanizing too much to ever be ensnared by a debutante. Certainly, no decent wife would allow the debauchery they enjoy. But the only woman they’ve ever loved has returned. Unfortunately, Society, and likely darling Lily, will never accept the sharing relationship they’d like to propose.
Lillian Drew returns to England after her husband’s mysterious death and finds solace with her girlhood crushes, Charles and William. Sure, they’re as unapologetically crass and self-centered as always, but she loves them both. When her dead husband’s creditors come after her, she has no choice but to remarry, though she can’t make up her mind which duke she’ll propose to. With a toss of one of the few coins she has left to her name, she hopes the loser will understand. 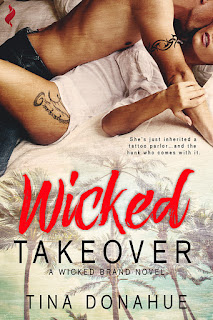 Wicked Takeover by Tina Donahue
She’s just inherited a tattoo parlor…and the hunk who comes with it.
Lauren’s in a helluva mess. Not only has she lost her corporate HR job, she’s just inherited Wicked Brand, a struggling West Palm Beach tattoo parlor…along with the virile dude who runs it. Lauren’s full-figured, sorta pretty, and wanting him badly. Dream on. She’s here to sell the place as quickly as possible for some much-needed cash and score a new position in the corporate world.
Dante’s sinfully hot with a killer smile and beautifully inked biceps. He sees the heat in Lauren’s eyes despite her conservative appearance, recognizing the dynamite woman she could be if she’d just loosen up and have some wicked fun. Dominance and submission. Making love in a public place. Having her lush body always accessible to and ready for his.
Unwilling and unable to keep their hands to themselves, Lauren and Dante turn to carnal games and seduction. Until lust turns to surprising need and friendship to something deeper that might just change their futures.