Friends become lovers is this combustible tale of a bad boy longing to be good for the sweet girl who longs to be naughty.  Keep reading to get a tempting glimpse of Thieves 2 Lovers by K Webster and J.D. Hollyfield, along with my impressions of it, then add it to your bookshelf.  In honor of this third installment in the 2 Lovers series make sure to fill out the form below for the chance to win a $25 Amazon GC too! 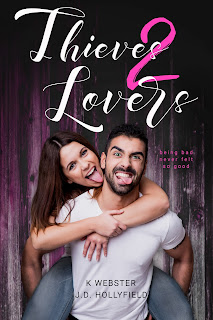 Best friends aren’t supposed to kiss.
But these best friends did.
He can’t get the taste of her lips off his mind.
She can’t let go of the guilt from her mistake.
He wants to be good enough for her.
She wishes life were different.
He’s the bad boy reject.
She’s the girl next door.
When opposites attract, they collide and create an explosion that can’t be ignored.
Is it possible to be madly in love with your best friend?
Love follows no rules because love is a rebel.
Her: We should talk about what's happening...
Him: It's about damn time.

FIND THIS AT GOODREADS here. 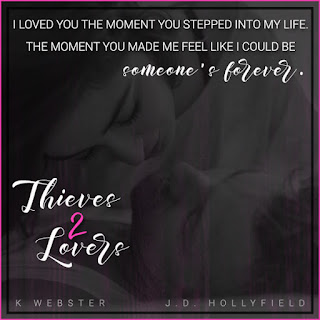 Linc's childhood was one of turmoil early on due to his mother being abused and him being forced into taking over the household.  His mother's remarriage, and the inclusion of a new sister, should've been a time of happiness but it instead led to rebellion and a festering of past pain being released.  Wild ways and poor choices made him the stereotypical bad boy, but with his recent decision to keep money from the mafia for himself, he's crossing over into criminal.  The moment he meets Reagan though is the moment his life changes irrevocably.  Before then his life was full of adventure with no care over consequences, he found thrills in being bad.  With Reagan he finds someone to be bad with as she longs to break out of her staid life and together they become thick as thieves.  Their relationship starts out as one of friendship, as he knows he's not good enough for her, but it becomes increasingly difficult not to cross the line into more.  Linc is a delicious hero who hides a heart of gold behind a snarky bad boy attitude. He revels in shocking others, goading them, and not being bound to anything. Being bound to Reagan is starting to appeal to him though as her sweet nature and unwavering acceptance of him and all his rough edges inspires him to be a better man.  With danger quickly catching up to him he'll do whatever necessary to keep her safe as she's stolen his heart and helped him become a man he likes and who's worthy of her love.  Linc's like a breath of fresh air, bubbling with energy and teeming with sensuality.  He's protective of Reagan and makes it his mission to see her smile as her happiness brings the same to him.  He's a sexy beast too with his tatted-up body and a penchant for making Reagan blush in his role as sexual teacher.  Their journey from friends to lovers evolved subtly as flirtations led to actions that scorched up the sheets and left me parched. Linc was the highlight of this story and his caring nature and unending charm endeared him to me.  His protective ways and willingness to sacrifice for Reagan had me falling for him completely and he still has the starring role in my nightly dreams.

Reagan's the proverbial good girl.  She has a kind heart and is loved and protected by her smothering brothers.  She tends to see the best in others and unfortunately it sometimes burns her.  A poor choice in her dating past leaves her desperate not to disappoint her family again and drives her into the arms of the successful and controlled Chase.  It's a relationship that leaves her frustrated, uncertain, and thankful that Linc's by her side through it all.  As Linc's always been there when she needed him most, and as danger tries to take her life, his protective nature comes roaring to the surface and takes them from friends to lovers.  Claiming Linc for herself allows her to experiment in all the erotic ways she's always wanted to without condemnation.  Through scorching yet playful encounters they block out the world and the danger following Linc.  I enjoyed seeing this carefree side to Reagan after all she'd gone through in her past relationships.  She experimented without fear as Linc was a more than willing teacher.  I found Reagan immensely likable and a loyal friend whose realistic interactions with her girlfriends brought a smile to my face.  The only time I became frustrated with her was in her keeping her relationship with Linc a secret.  She treated him as her dirty little secret, gave the impression he was unworthy to be with her, and allowed her brothers to think a lie perpetuated by Chase.  Despite that I found Reagan to be the kind of person I'd call friend and cheered her on as she grabbed on to living life to the fullest with both hands.

This was a fast-paced story with lots of suspense and action in and out of the bedroom.  Reagan and Linc's connection was combustible with banter that was witty and erotically-charged and when they were together it was like watching a tennis match as they fed off each other's reactions.  Linc's journey to becoming a better man was fraught with danger and showed him to be the quintessential hero when it mattered most.  Reagan was a loyal and caring heroine who saw only the good in Linc, made him see his true worth, and found happiness with a person truly meant for her.  Their scenes were scorching and had me blushing a time or two.  Surrounding this immensely appealing main couple were the two couples from the previous books in this series.  They're friends and family who've all become intertwined with interactions that were playful yet showed how much they cared for each other.  Their reactions to Linc and Reagan's clandestine relationship was varied and provided some humorous exchanges. The conclusion of this tale was perfect as each character got to share their final thoughts in heartwarming words that put a bow on this series ender.  With the turn of the final page happiness reigned and warm fuzzies abound in this sexy and sentimental ending to a series that just kept getting better and better. 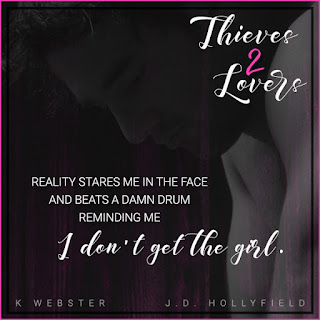 THE PREVIOUS INSTALLMENTS IN THE 2 LOVERS SERIES... 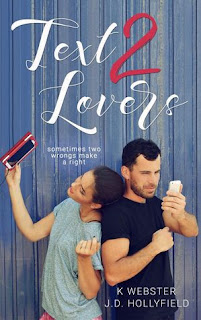 TEXT 2 LOVERS (Book #1)
It’s the start of nothing good.
I fired off a storm of raunchy text messages…to the wrong number.
And he replied.
Him: Show me a picture.
Him: Tell me your name.
Why does the lure of anonymity have me craving to indulge a stranger?
It’s the start of everything right.
I received a slew of text messages…when everything in my life was wrong.
And she made me laugh again.
Her: You’re probably a creeper.
Her: Possibly a stalker.
Why do I have the overwhelming need to find this stranger who saved me and make her mine?
Him: Take a chance with me.
Her: This is crazy.
Him: I need to see you.
Her: What are we doing?
Him: We’re about to find out. 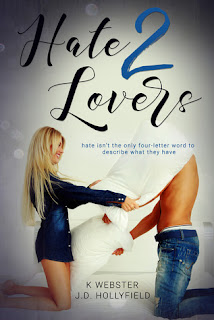 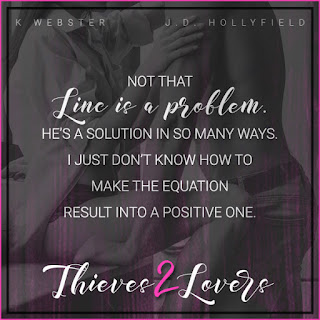 Creative designer, mother, wife, writer, part time superhero...
J.D. Hollyfield is a creative designer by day and superhero by night. When she is not trying to save the world one happy ending at a time, she enjoys the snuggles of her husband, son and three doxies. With her love for romance, and head full of book boyfriends, she was inspired to test her creative abilities and bring her own story to life.
Life in a Rut, Love not Included is her Debut Novel. J.D. Hollyfield lives in the Midwest, and is currently at work on blowing the minds of readers, with the additions of her new books and series, along with her charm, humor and HEA's.