It’s an unexpected romance that results from a wedding cancelled at the altar in this historical tale full of charm.  Keep reading to get a tempting taste of Cowboy Charm School by Margaret Brownley, then add it to your bookshelf.  In honor of this first installment in the Haywire Brides series make sure to fill out the form below for the chance to win 1 of 5 copies of this book too! 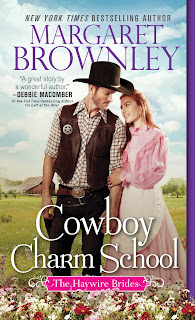 When Texas Ranger Brett Tucker accidentally derails a wedding, he’s determined to bring the estranged couple back together...but he never dreamed he’d start falling for the bride!
Texas Ranger Brett Tucker hates to break up a wedding, but the groom—notorious criminal Frank Foster—is a danger to any woman. So he busts into the church, guns blazing...only to find he has the wrong man.
STOP THAT WEDDING!
Bride-to-be Kate Denver is appalled by her fiancé’s over-the-top reaction to the innocent mistake and calls off the wedding—for good. Guilt-ridden, Brett’s desperate to get them back on track. But the more time he spends with Kate, the harder he falls…and the more he yearns to prove that he’s her true match in every way.

“Miss Denver. I’m afraid we didn’t get properly introduced the other day. I’m Brett Tucker, Texas Ranger.”
“I know who you are,” she said, her voice as hard as the peanut brittle displayed in the glass counter standing between them.
He sucked in his breath. If looks could kill, he’d be a goner for sure. Not that he could blame her. Thanks to him, not only was her interrupted wedding the talk of the town, the Haywire Dispatch had planted the story on the front page beneath a bold headline: Wedding Ends in Disaster.
Brett cleared his throat. “I…eh…came to apologize again for what happened. I had no idea that there were two Frank Fosters.” Thinking that an explanation was in order, he continued, “The Foster I was looking for is a wanted man. I’ve been on his trail for a long while.” TwiceBrett had almost caught him. Both times the man had slipped away.
“When I heard that someone by that name was getting married, I immediately assumed it was the fugitive I’ve been chasing.”
Miss Denver crossed her arms. “Next time you might want to look before you leap.”
“I hope to God there isn’t a next time, ma’am. I never want to stop another wedding.” He rubbed his still sore chin. “All I could think about was saving you.”
“Saving me?” She stared at him. “You don’t even know me.”
“Not personally, ma’am, that’s true. But the Frank Foster I’m after is a danger to any woman.”
She said nothing, and he continued. “I hope you’ll let me make it up to you. If there’s anything I can do...”
“I believe you’ve done quite enough already, Mr. Tucker,” she said, her voice as cool as the eyes boring into him.
He drew in his breath. She wasn’t making it easy but then, why should she? Still, he wasn’t ready to give up. “There must be something. I tried bailing your fiancé out of jail, but he refused to accept my help.”
Something flickered in the depths of her eyes. “If you’re serious about wanting to do something, you’ll leave town and not return.”
Tilting his Stetson forward, he rubbed the back of his neck. “I’m afraid that will be a little hard to do, ma’am.” A crime wave had hit the county, overwhelming local lawmen. The opportunity to serve as a special Texas Ranger couldn’t have come at a more opportune time.Brett was sent to Haywire to assist the sheriff in bringing the culprits to justice, but the reason he’d volunteered for the job was far more personal.
“I’m here on special commission from Captain McMurray.”
Miss Denver greeted his news with a look of disdain. “Then I suggest you attend to your business and stay away from the rest of us.”
“As you wish,” he said.  He made quick strides toward the door before stopping. Glancing over his shoulder, he found her watching him. “Your dress,” he said. “I’d feel a whole lot better if you’d let me pay for any damage.” He had no idea the cost of a wedding gown, but it couldn’t be cheap.
“Go.” she said with a beseeching look. “Please. Just…go.” 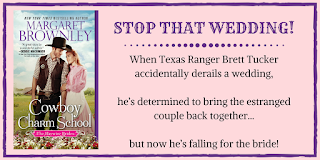 N.Y. Times Bestselling author AUTHOR MARGARET BROWNLEY has penned more than forty-five novels and novellas. Her books have won numerous awards, including Readers’ Choice and Award of Excellence. She’s a two-time Romance Writers of American RITA®finalist and has written for a TV soap. She is currently working on a new series.  Not bad for someone who flunked eighth- grade English. Just don’t ask her to diagram a sentence.

a Rafflecopter giveaway
at September 08, 2018