Book Blitz for Spin the Bottle by Sara Wylde (REVIEW)

It’s a chaotic life full of doubts and sensuality for the vast array of students that form a friendship in this erotically-charged tale.  Keep reading to get a tempting taste of Spin the Bottle by Sara Wylde, along with my impressions of this angsty romance, then add this second installment in the Fast Times at Ridgemont Hall series to your bookshelf! 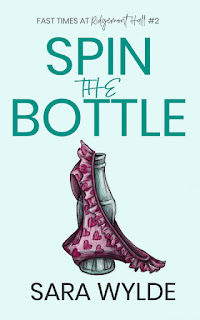 Jax
I’m a virgin, but I don’t want to be. I just want to get it over with, so I made a list. I held interviews. (I know, I’m a total Type A.) The winner is Sebastian Rathbone. Grade A Beefcake who plays defense for the Grizzlies’ Rugby team. Manwhore extraordinaire. So basically, a professional. The problem? My best friend, Matt. For some reason, he wanted me to pick him. I’d never choose him because then I’d fall in love and I remember the hell that was middle school. Now that he’s grown into his head and feet, and he is by definition also Grade A Beefcake, there’s even less chance he’d ever feel more than friendship for me. Why put myself through that? I thought I’d locked all of that away until a game of Spin the Bottle makes me doubt everything. Especially the lie I’ve been telling myself about not being in love with my best friend.
Matt
Sebastian Rathbone? Dude. No way. He’s not a bad guy, but he’s not the guy for Jax. If anyone knows the guy for Jax, that’s me. It hurts I wasn’t even consulted. Actually, what bothers me the most is that she didn’t ask me to be the one. To punch her V-Card, I mean. I’m pretty good at what I do, or so I’ve been told. It should be a good memory. Something special. And lemme tell you, Rathboner isn’t going to make it special for anyone. I don’t like it that there’s this part of her she’s going to give to someone else, but I guess I have to get right with it. I’m the best friend. Not the lover. Except when faced with losing her, I’ll have to take a spin on chance just one more time. 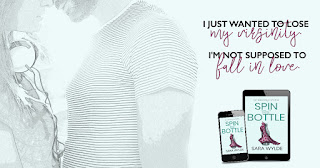 Fans of unconventional romances will find this a deliciously decadent read that will take you on an occasional emotional roller coaster ride.  When a group of eclectic personalities set out to play child’s games they end up dealing with adult emotions and choices in this second installment in the Fast Times at Ridgemont Hall series.  From the first page to the last readers will find themselves captivated by this romance full of realistic concerns and angst, along with interactions teeming with sensuality.

Jax and Matt have been friends for as long as they can remember and don’t ever want to ruin the close knit connection they have.  Random moments of attraction as teens have become moments of obsession as young adults though that turn a game of Truth or Dare into something more as they can no longer deny their feelings.  For Jax, her feelings for her friend are muddied even more by the decision to turn in her V-card...and that the one she’s chosen isn’t Matt. Her decision brings about jealousy and fears over the future that leads to lots of heartfelt talks and unexpected hook-ups with the likable Bastion for both of them.  Further clouding her thoughts of the future is her mother getting pregnant as a teen which Jax doesn’t want for herself as she wants to live life to the fullest. These fears lead to a few misunderstandings between her and Matt, and a few frustrations for readers, along the way too.

It’s the charming friends-to-lovers connection between Jax and Matt that first drew me to this story.  They’re supportive of each other and nonjudgmental as they both embrace their sexuality to the fullest.  They’re there for each other as a sounding board to help work through their doubts and fears and it was heartwarming to see.  While Jax’s sexual journey rang truer for me, Matt’s attraction towards Bastion seemed to come out of nowhere.  While I enjoyed the friendship between the two men, with their snarky interactions, their scorching interludes felt rather superficial.  I had hoped for better from Matt as he’s a very likable hero, very true to his feelings, and is quick to talk through things with honesty.  He’s funny, caring, and a good listener who is very protective of Jax and would do anything to make her happy.  He never pushes her to do more than she’s ready for and I was happy she had such a supportive person in her life which is why I wish more time had been spent on him.

Though their journey leads to a HFN conclusion, the connection between Jax and Matt was a satisfying one that talked boldly about desires and doubts.  The author had her characters embracing all sorts of erotic encounters, never sugar-coating their choices, giving them a well-rounded college experience. Surrounding these young people with childhood games made for an even more scorching narrative that kept me glued to the pages.  Alongside the likable main couple is a large cast of secondary characters I’d love to see more of.  I’m particularly intrigued by bisexual Bastion, whose scenes were deliciously tempting, and Jax’s friend Shae who acted outspoken but who was riddled with self-doubts.  These characters were an entertaining addition to the story but readers only got to know them on a superficial level, which is why I hope to see them more fully fleshed-out in future installments.  On a whole this was a decadently delightful romance, with a few imperfections, that still kept me turning the pages as the childhood games turned naughty.  It’s pure escapism at times and for that reason alone I recommend this tale. 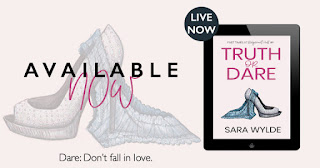 Sara Wylde is the crackfic! contemporary pen name for PNR/UF author Saranna DeWylde. She rather imagines that all the pen names live in the same dorm in her head and frequently have discussions that look and sound something like an episode of Herman's Head.