Book Tour for Shot on Goal by Jami Davenport (REVIEW)

Two people unhappy with their lives find acceptance in each other’s arms in this flirty romance of starting over set amidst the backdrop of the hockey world.  You’ll also get my impressions of Shot on Goal by Jami Davenport, the eleventh installment in the Game On in Seattle series, which will have you wanting to add this sensual tale to your bookshelf! 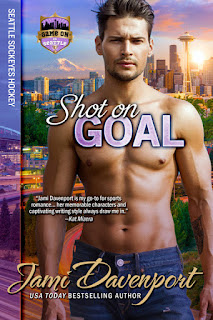 When you're at the top, there's nowhere to go but down.
Two talented skaters. Two bright futures. Two shining stars. One ruined by a career-ending scandal and another by a father's ruthless ambition.
She was the darling of the winter games, winning a bronze in pairs figure skating one week after losing both parents in a car accident.
He was the future of the Sockeyes hockey team crowned the best young player in the league and heir-apparent to the hockey throne once occupied by his father.
Together they're fire and ice, and when things get that hot, they melt. Can these two broken souls find comfort and courage in each other's arms or will they find only pain and regret?

Fans of sports-themed romances will find this an exhilarating ride, with bits of angst along the way that sometimes left me frustrated, but ultimately left me satisfied by its cheer-worthy ending.  It’s a tale of second chances, self-doubt, and living a fulfilling life that pulled me in and wrapped up this book (series) with a heartwarming bow.

Drew Delacorte was always meant to be a star hockey player, but lately he’s starting to wonder why he ever started playing in the first place.  At one point playing might have been fun, but since the death of his brother he’s feeling weighed down by expectations and promises made to a dying man.  He’s no longer feeling fulfilled, neither on the ice nor off, and it’s starting to show as he’s playing with less heart and soul.  The same can be said of his lack of a love life as he’s never found anyone worth spending more than a night with.  The moment disgraced former ice skater Marina steps on his ice though his life changes irrevocably as she gives him a glimpse of HEA, gives him unconditional support, and inspires him like nothing else has before.  It’s a rocky relationship though, one weighed down by their own fears, as well as judgments from the outside world which leads to a big misunderstanding.  Through it all Drew’s a delicious hero who wears his heart on his sleeve.  When it comes to his feelings for Marina he’s quick to want to acknowledge their connection as he’s proud to have her by his side.  Though they have a prior connection he doesn’t hold her past against her as they got to know each other on a deeper level.  I felt sympathetic towards him as he just seemed so unhappy at the start of the story.  His father was hypercritical of him, constantly used guilt over his dead son to push Drew into doing what he wanted, and I dreaded each time he came on the scene.  His love for Drew seemed contingent on his hockey success and their big talk at the end still made me doubt his father’s sincerity and it made me ache for Drew through most of the story.  All I wanted to do was hug him as it quickly became clear who and what brought him contentment.

Marina Sanders was once the darling of the ice skating world until bad decisions, and disloyal friends, left her reputation in shatters and had her fleeing across the ocean to make a living.  Tired of hiding, and once again being used by others, she leaves it all behind for a job in the States in the hockey world. Joining the Sockeyes may get her back on the ice but it also puts her in close quarters with people from her past.  Though she expects people’s anger, she doesn’t expect to find a kindred spirit in Drew as they find themselves drawn to each other while figuring out their futures.  Through this journey Marina seems a bit naive at times, a bit fatalistic too in her thoughts of how Drew feels about her.  Her past has made her leery of trusting others and that’s quite clear when it comes to her difficulties with saying “I Love You”.  Though she finds it difficult to speak outright with Drew, I did admire her talk with his mother that had her finally sticking up for herself.  She might not have been my favorite heroine at times, but I could easily see myself interacting with her and I appreciated her unwavering support of Drew when he needed it most.

This was a sensual read full of heartache and exhilarating sports scenes that kept me on the edge of my seat from the first page to the last.  While rooting for this emotionally bruised main couple to find their way to HEA, I also found myself rooting for the Sockeyes to win the Cup.  In a romance teeming with self-doubt, Drew and Marina take readers on a roller coaster ride of emotions that led to scorching interludes as well as heartbreaking decisions.  Theirs was ultimately a romance nicely balanced with sports scenes that immersed me even further into this larger than life world.  Action on the ice had my heart pumping, left me cheering and screaming, while I got glimpses of other intriguing players who all form an unlikely family in their run for the Cup.  They were a dedicated bunch, willing to call out others for bad behavior when needed, and I’m left wanting to read their previously-told stories while waiting for new ones to hopefully be written.  Though there’s a sense of completeness with this story, and its epilogues, I look forward to returning to this world and the appealing cast of characters found amidst the pages. 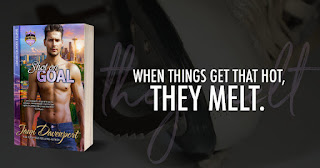 USA Today Bestselling Author Jami Davenport writes sexy contemporary and sports romances, including her two new indie endeavors: the Game On in Seattle Series and the Madrona Island Series. Jami’s new releases consistently rank in the top fifty on the sports romance and sports genre lists on Amazon, and she has hit the Amazon top hundred authors list in both contemporary romance and genre fiction multiple times. Jami ranked Number Seven on Kobo’s Top Ten Most Completed Authors, an honor bestowed on the year’s “most engaging” authors based on an average page completion rate by their readers.
Jami lives on a small farm near Puget Sound with her Green Beret-turned-plumber husband, a Newfoundland cross with a tennis ball fetish, a prince disguised as an orange tabby cat, and an opinionated Hanoverian mare.
Jami works in IT for her day job and is a former high school business teacher. She’s a lifetime Seahawks and Mariners fan and is waiting for the day professional hockey comes to Seattle. An avid boater, Jami has spent countless hours in the San Juan Islands, a common setting in her books. In her opinion, it’s the most beautiful place on earth.