Book Spotlight on No Tomorrow by Carian Cole (REVIEW)

Readers will find this an unforgettable read the moment the first page is turned and with each page turned thereafter.  Keep reading to get a tempting taste of No Tomorrow by Carian Cole, along with my impressions of this emotionally powerful read, then add this realistic standalone romance to your bookshelf! 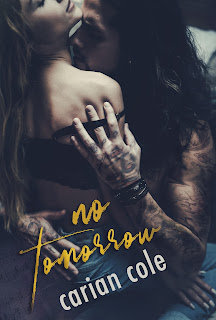 The people we love are thieves.
They steal our hearts. They steal our breath.
They steal our sanity.
And we let them.
Over and over and over again.
******************************
They say you never forget your first time.
Mine was with a homeless musician who effed my brains out under a bridge.
He was my first love. And fourteen years later, I still can’t get him out of my head.
He broke all my rules.
He also broke my heart.
I watched him climb to stardom, cheering him on from afar.
But I was never a fan; just a girl in love.
Like a tornado, he spiraled, leaving a path of destruction in his wake.
But love conquers all, right? It has to. Because here I stand, ravaged and ruined, needing it to be true.
You can’t go back, but I want to. Back to the bridge. Back to when he sang only for me. Before he was famous. Before he shattered my heart.
I thought I knew everything about him.
But I could not have been more wrong.
He promised me every tomorrow. And here I am, waiting.
And hoping.
Again. 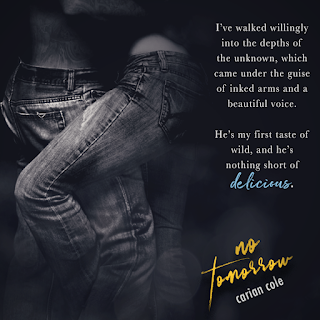 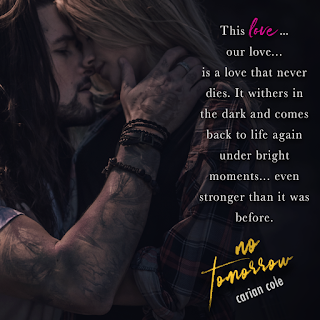 Never having read this author before I didn’t know what to expect, but after turning the last page just now I know I’ll never forget this author’s name and the epic tale she told.  From the first page to the last readers will find themselves captivated by this emotionally intense story that packs quite a punch.  It’s a tale that takes you on a roller coaster ride of emotions, showing you the empowering aspects of love along with the weakness of being in love. It’s a gut-wrenching story not always full of sunshine and roses, but it is a realistic one as it deals with issues of addiction and mental health in an unflinching manner that kept me fully invested.

This is an epic tale featuring the unconventional romance between good girl Piper and brooding, homeless musician Blue who carries his demons like a backpack.  Piper’s a sweet heroine who’s never felt fully accepted.  She’s always felt as though she was a joke and there’s plenty of individuals around her who compound her negative feelings.  She’s not outgoing either and sets herself apart in a world of books where everything is happy and clean.  While reading a book one day she finds herself drawn to a musician playing under a bridge and their instant connection changes her life for years to come.  With Blue, she ends up doing things she never thought she would as the proverbial good girl broke out of her shell.  She’s a supportive heroine, sometimes almost frustratingly supportive, but her reasons for being so rang true as Blue made her feel cherished.  She’s a kind-hearted person, determined to save the man she loves, which I can easily relate to as the fixer in my own family.  Despite all the heartache Blue brought her, his love still gave her strength and unwavering acceptance in who she is.  Her relationship with Blue was nothing like that found in her books.  It was ultimately just as beautiful though in its imperfections as it was a hard-fought journey they went through to get to the very satisfying epilogue.

Blue’s a bit of a mystery as the majority of this story is told from Piper’s POV. He’s a tortured soul, my favorite kind when it comes to books, and being around him is both perfection and torture.  His words are lyrical and it’s easy to fall for him.  Unfortunately, along with all that beauty came a darkness, a darkness of addiction that kept me on edge waiting for the next disappointment to happen in their journey of togetherness.  He clearly loved Piper but the fight within himself was a truly difficult one that brought about many heartbreaking moments.  The love he showed his dog Acorn endeared him to me though and is what I brought to mind when he was being especially hurtful as it showed him to have a good heart despite all his other issues.  Loving Blue definitely isn’t easy, but through Piper’s thoughts you can see why she’s willing to fight so hard for him.

Readers will find this an epic love story full of heartache and heartfelt emotions from the first page to the last.  It’s an exhausting read at times as every one of my emotions was brought to the forefront as I continued from one chapter to the next.  I cried, I laughed, I smiled, I screamed...above all though, I felt fully invested in the outcome of this decades-long relationship.  It wasn’t always a perfect relationship when seen from the outside, but it was an unforgettable relationship that saw them both grow and change in this powerful tale that has me adding this author to my auto-buy list. 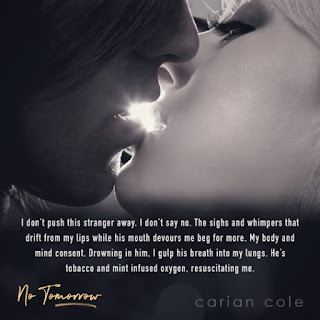 I have a passion for the bad boys, those covered in tattoos, sexy smirks, ripped jeans, fast cars, motorcycles and of course, the sweet girls that try to tame them and win their hearts.
My first novel in the best-selling Ashes & Embers series, Storm, published in September of 2014. I have many books and sequels slated for this series. My new spin-off series, Devils Wolves, launched in 2016 with the best-selling novel, Torn. There are several books planned for this series as well.
Born and raised a Jersey girl, I now reside in beautiful New Hampshire with my husband and our multitude of furry pets and spend most of my time writing, reading, and vacuuming.