It’s a sexy and charming story found amongst the pages of this tale of curses and destiny as a geeky guy sets free a goddess damned for eternity with unexpected romance and life changes the result.  Keep reading to get a tempting taste of Soft Iron by Megan Slayer, then discover even more about it by visiting the other sites hosting this tour.  In honor of this third installment in the Celestial Mates series make sure to fill out the form below for the chance to win a prize pack of goodies including a handmade necklace too! 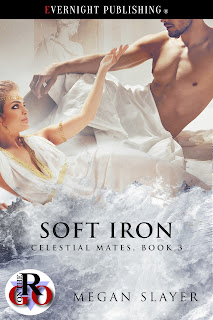 Bia is the goddess of strength and compulsion, but those traits have her trapped in iron. A simple kiss could break the curse, but who wants to kiss a statue? Especially a statue of a woman stabbing a man in the heart? She knows better than to hope her celestial mate will find her, but what if her hopes are justified?
Oliver, a very quiet, geeky guy, knows his way around fabric and fashion. He excels at his job of dressing mannequins for storefronts, but he's lonely. When he sees the statue of Bia, he's smitten. She's everything—strong, confident and sexy—everything he wishes to be. What will happen if the shy man overcomes his fears and gives in to his heart's desire? He just might be able to harness the power of the goddess.

“How did this happen? I’m free.” She kept her knees together and folded her hands on her lap, bunching the fabric to hide her nudity. “The curse? What happened?”
“I’d say you found the person who could be your celestial mate—the one you’re meant to be with forever,” Zelus said. The door opened. Kratos, Andy, and Cam entered the room. Kratos’s eyes widened. “This is a great day. Now we’re only missing Nike.”
“We’ll find her,” Andy said. He slid an arm around Kratos. “We will.”
“How do you feel?” Kratos knelt beside Bia. “How were you freed?”
“I was getting to that,” Zelus said. He rolled his eyes. Beside him, Camden shrugged.
“Oliver. The lovely human.” She bit back a smile. “He was kind to me. He kissed me.”
“He was?” Kratos shared a glance with Zelus. “Oliver. We had a feeling.” He nodded. “Since Oliver has lifted the curse, there is a chance you two are celestial mates.”
“Zelus said that,” Bia said.
“But this transformation is temporary. The hard part is next.” Zelus folded his arms. “You have to convince Oliver to fall in love with you.”
“I don’t know,” Andy said. “It shouldn’t be too hard. He seemed pretty enamored with her when we showed Bia as a statue.”
Bia clasped her hands together and smiled. When she looked at Oliver, even as a memory, she warmed all over. The rage she’d been known for—the reason for her being imprisoned in the iron— melted away when she thought about him.
“Andy, he was doing his job.” Kratos stood. He sighed and tilted his head to the side. “He’s here to dress her. Or he was. He talks to the statues. Maybe he is her celestial mate, but what if he was just being nice?”
Bia clutched the fabric tight to her body and jumped to her feet. “Then why not let him decide?” She stepped up to her brother. She’d suppress her natural urge to use her might against him, but she wasn’t above using force if the need arose. “The curse was broken— for however long, I don’t know—but it was broken. By him.” 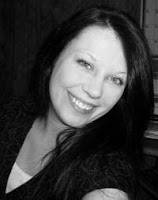 a Rafflecopter giveaway
at September 26, 2018