Set against a backdrop of holiday joy comes an emotionally battered hero who finds himself drawn to the promise of HEA surrounding the single mother trying to heal him.  Keep reading to get a tempting taste of Cowboy SEAL Christmas by Nicole Helm, then add this heartwarming tale to your bookshelf.  In honor of this third installment in the Navy SEAL Cowboys series make sure to fill out the form below for the chance to win 1 of 5 copies of the previous book in this series too! 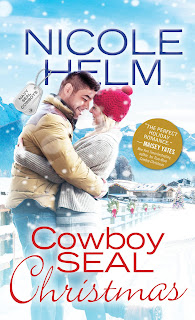 Three former Navy SEALs
Injured in the line of duty
Desperate for a new beginning...
Searching for a place to call their own.
Single mom and Revival Ranch’s on-site therapist Monica Finley has dedicated her life to helping brave servicemen and women, but former Navy SEAL Gabe Cortez is the one man whose shell she just can’t crack. Yet with the holidays fast approaching, she may finally have a plan. In a bid to get Gabe to open up, she’ll ask for as much help as possible—cutting down the Christmas tree, stringing lights, the whole nine yards.
Who could possibly be a Grinch with so much holiday cheer in the air?
Gabe has always hated Christmas—the holiday never fails to remind him just how alone he truly is. But the more time he spends with Monica and her young son, the more he finds himself drawn to their cozy little family…and the more he begins to realize his long-suppressed Christmas dreams may finally be coming true. 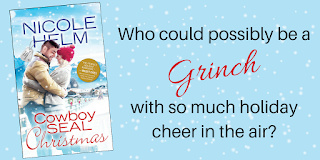 a Rafflecopter giveaway
at September 09, 2018