Book Spotlight on Got It Bad by Christi Barth (GIVEAWAY)

A man forced into Witness Protection because of familial lies finds himself attracted to the woman sworn to keep him safe in this sensual and suspenseful tale of giving in to temptation.  Keep reading to get a tempting taste of Got It Bad by Christi Barth, then add this deliciously decadent contemporary romance to your bookshelf.  In honor of this third installment in the Bad Boys Gone Good series US readers need to make sure to visit the link below for the chance to win 1 of 3 paperback copies of the second book in this series too! 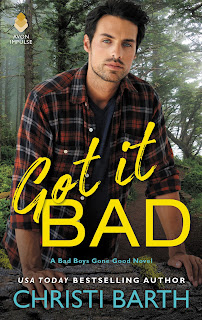 In USA Today bestseller Christi Barth’s last Bad Boys Gone Good novel, the brother who’s always followed the rules finally gets to be a little bad.
Kellan Maguire was a semester away from becoming a lawyer when his life imploded. Now he’s in Witness Protection, hiding from the mob and mad as hell that his brothers lied to him about, oh, everything. The only bright spot in his new life is their drop-dead-gorgeous U.S. Marshal handler. Yeah, he wants to handle her... a lot.
Federal Marshal Delaney Evans has protected her fair share of dangerous criminals. But Kellan is a whole different kind of dangerous—dangerously hot, to be specific. The charming, handsome, and utterly law-abiding Maguire brother got under her skin the moment they met and the more time she spends with him, the harder it is to deny their attraction. Delaney’s willing to give Kellan one night—to get him out of her system—and then it’s over.
Except one night isn’t enough and soon they’re breaking every rule of WITSEC to be together. Kellan’s got it bad for her, but Delaney’s career, her entire life, would fall apart if anyone found out. And then the biggest complication of all hits…
EXCERPT:

“You have my word.”
“Great. The word of an almost lawyer,” Delaney said mockingly. “That and twelve dollars will buy me a martini.”
Then she instantly regretted pushing his buttons. It was habit. It was fun.
It was dangerous.
One thick, dark eyebrow winged up, like an arched frame around his stunning ice-blue eye. “First you call me spoiled, and now you’re insulting my near-lawyerness? If I didn’t know better, I’d say the lady doth protest too much.”
“The lady has her hands full dealing with your troublesome brothers. She doesn’t need to waste her energy constantly fending you off, too.”
“I think you do.” Kellan set his cup down.
Delaney gaped at him. Because she’d been oh-so-careful never to give away with so much as a flicker the fact the she was still interested. How could he tell something that Delaney barely admitted to herself? “You think I want to keep fending you off?”
“Yes.” Kellan stepped closer. In fact, he moved in way past what would be polite. Invaded her personal space just as much as he’d been invading her mind. “You like fighting with me. You could ignore my compliments, my flirty remarks. You don’t. You rise to the bait every time. I think you’re every bit as frustrated as I am.”
“You don’t know anything about my life outside the time I spend working on your case.” Heat flashed across her cheeks and chest. And she stepped in, too. To where the tips of her breasts brushed his chest, and her feet bumped against his. “Don’t begin to think you know me.”
“I don’t think. I know. I know that you may have been on dates since you met me.  But none of them distracted you from whatever’s simmering between us. You want to turn back the clock to the day I asked you out and follow through on it.”
“I don’t.” Her words were the verbal equivalent of a foot stamp. Then, softer, as if she didn’t mean to speak it out loud at all, Delaney said, “We can’t.”
In response, Kellan framed her face with his hands, tilted her head back more, and kissed her.
Not the light, polite, introduction kiss they’d shared the first time. Delaney had obviously pushed him past that step. Kellan kissed as if he needed her to know just how badly he wanted her. His lips worked across her mouth, moving and kneading. Kellan nipped at her wide bottom lip. It felt like punishment for her making him wait so long.
It also felt like a reward for waiting so long, and she rewarded him with a tiny moan.
Delaney’s hands fisted in his thick hair, pulling and tugging. It undoubtedly showed him the insta-heat burning her up inside as much as the way her leg wrapped around his calf.
She wanted more.
His tongue teased at the seam of her lips, and Delaney opened for him like they’d already done this dance a hundred times. She tasted the sweetness lingering from his drink. Desire rocketed through her, turning her nerves to lava. From the way his penis had hardened to pure steel against her belly, Kellan felt the same.
He streaked the backs of his knuckles down the undersides of her raised arms. Kept going to just lightly brush them along the sides of her breasts, her ribs, the flare of her hips to finally land on the curve of her ass.
Kellan dug his fingers in and lifted. Just high enough to press her center against his penis. Instantly, she got on board with the position, rocking against him even as her tongue twined and teased.
It was impossible to stop the little, breathy moans that kept escaping from her. It was impossible not to undulate against his rock hard abs and dig her fingers into the sculpted muscles of his back. Kissing Kellan wasn’t foreplay. It was a sex act all by itself. Utterly satisfying even as it drove her hunger up immeasurably.
And while Delaney would’ve sworn it was impossible, he was a million times better in reality than all the ways she’d fantasized being with him over the past months. Kellan ripped his mouth away to burn a trail of kisses down the side of her neck.
A semi rolled by, and the driver honked for a long time. It had been easy to ignore the white noise of the cars passing, but the horn broke through to Delaney. It reminded her they were on the edge of a green-scummed pond, across from a strip mall. The world could see them making out. And they’d already shot way past a reasonable stopping point.
So she unwound her leg and put her foot back down on the ground. Kellan seemed to get the signal. He dialed back the intensity on his kisses and rained them up the side of her face, down her nose, to end with a light peck on her mouth before easing back. Then he moved his hands to her shoulders.
It took a moment for her eyes to re-open. When they did, it took another moment before Delaney fully focused on him.
“Not only can we kiss,” Kellan said with enough authority to make her realize he wouldn’t allow her to pretend this hadn’t happened. To pretend that she hadn’t just climbed him like a tree and responded with a fervor that matched his own. “We’re absolutely doing it again.” 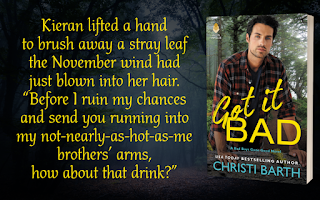 USA Today bestseller CHRISTI BARTH earned a Masters degree in vocal performance and embarked upon a career on the stage. A love of romance then drew her to wedding planning. Ultimately she succumbed to her lifelong love of books and now writes award-winning contemporary romance.
Christi can always be found either whipping up gourmet meals (for fun, honest!) or with her nose in a book. She lives in Maryland with the best husband in the world. 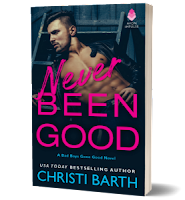