Fans of historical romances will find themselves drawn to this tale of a woman struggling to survive on her own while caring for a man led astray in this sweet and heartfelt tale.  Keep reading to get a tempting taste of Priscilla, Widows of WIldcat Ridge Series by Charlene Raddon, then learn even more about this book by visiting the other sites hosting this tour.  In honor of this first installment in the Widows of Wildcat Ridge series make sure to fill out the form below for the chance to win a $25 bookstore GC too! 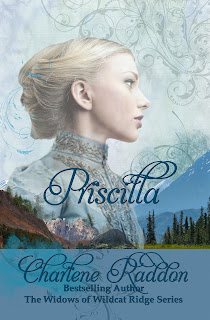 After losing her father and husband in a mine disaster, Priscilla Heartsel faces poverty and eviction from her home by a heartless mine owner. Tricked into a bank robbery gone wrong, Braxton Gamble finds himself shot and unconscious in Priscilla's bed. Can they survive long enough to find a love more precious than gold?

After the disaster, the women had acquired a school bell which they mounted on a pole in the center of town by the jail, with a long rope hanging down so anyone could ring out a warning if trouble showed up, like outlaws or Indians. But the bell was too far away, and her problem less serious than outlaws or Utes.
Or was it? She had no idea who might be in her room. The erratic footprints indicated the intruder was ill or injured. How dangerous could an injured man be?
A dash to her father's room armed her with his army revolver from his desk. Her husband had taught her to shoot. If the intruder intended to ravage her, he would be disappointed. She'd shoot him before she'd allow that.
A cautious peek inside her room showed nothing, only half the space being visible from where she stood. Taking a deep breath, she slipped around the corner, gun held ready.
A strange man lay on her bed, face-down, asleep or unconscious. His boots, coat and shirt lay crumpled on the floor. A gun-belt encircled his hips, the gun beside his hand. Congealed blood pooled beneath him staining her coverlet. He appeared dead.
A scream rose to her throat. She swallowed it. One did not scream indoors.
She picked up his Walker-Colt six-shooter and deposited it in a drawer of the bedside table and slipped her father's gun into her skirt pocket.
Standing back from the bed, she prodded him with a cold poker from the small stove in her room. "Mister? Can you hear me?”
He didn't stir.
"Mister?" She stepped closer and poked him again, terrified he would jump up and grab her.
Nothing. Lord have mercy, she had a dead man in her bed!
She returned the poker to its place by the stove. A blanket. Or a sheet. She needed something to cover him with. A summer blanket from the trunk at the foot of her bed would suffice. As she laid it over him, he moaned.
He was alive!
Unconscious, but alive.

Charlene Raddon’s first serious attempt at writing fiction came in 1980 when a vivid dream drove her to drag out a typewriter and begin writing. Because of her love of romance novels and the Wild West, her primary genre is historical romance. Kensington Books originally published five of her novels. These were later released as eBooks by Tirgearr Publishing. Currently, Charlene is an Indie author with. She also designs book covers, specializing in western historical.

a Rafflecopter giveaway
at September 17, 2018