Book Spotlight on Wild On My Mind by Laurel Kerr (GIVEAWAY)

Former high school acquaintances find their crackling connection roaring back to life in this charming romance set in a zoo where the animals play matchmaker for a couple teeming with sexual tension.  Keep reading to get a tempting taste of Wild On My Mind by Laurel Kerr, then add this entertaining contemporary read to your bookshelf.  In honor of this first installment in the Where the Wild Hearts Are series make sure to fill out the form below for the chance to win 1 of 5 copies of this book too! 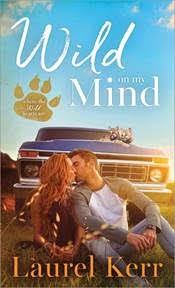 Love runs wild at the Sagebrush Flats Zoo, where a motley crew of big-hearted animals helps the most unlikely couples find love.
When Katie Underwood discovers a litter of newborn cougar cubs, the last person she expects to come to the rescue is her former crush—and high school nemesis—Bowie Wilson. The worst part? He doesn’t seem to remember the trouble he caused her.
As a single father and owner of a cash-strapped zoo, Bowie struggles to balance budgets while raising his preteen daughter and a host of rascally animals. He considers himself lucky when Katie agrees to lend her talents to a publicity campaign in support of the zoo’s animal rescue programs—until he learns just what she’s planning...
This time, Katie is determined to resist Bowie’s charm. But a lovelorn camel, a matchmaking honey badger, and a nursemaid capybara have different plans. Can they and the rest of the zoo’s menagerie help Bowie break through the barriers surrounding Katie’s heart?
Love can’t be tamed...

“What other kinds of animals do you have?” Katie asked, steering the conversation away from him.
“Well, there’s Frida here,” he said, jerking his thumb in the direction of the grumpy grizzly. “She’s about nineteen years old. You might remember her from when you were a kid. She was brought to Lou as a juvenile with a damaged foot. Poachers had set up a bear trap in Rocky Ridge National Park, and Frida had been caught in it for days before a ranger found her. She’s walked with a pronounced limp ever since, so she couldn’t be reintroduced into the wild.”
“Poor girl.” Katie leaned against the fence to get a better look at Frida. The bear lifted her head to emit a long-suffering sound halfway between a grunt and a roar.
Katie laughed. Bowie joined her by the rail, his T-shirt brushing against her bare arm. Unwanted desire flared within her. She almost succeeded in suppressing a tremble, but then he chuckled—the sound low, deep, and most of all warm. The husky timbre of it washed over her. Despite the wave of heat, she shivered.
Bowie’s gray eyes darkened at her reaction. With the summer sun beating down on her back, Katie couldn’t claim a chill to explain away her body’s instinctual reaction to him. Instead, she changed the subject.
“I guess Frida doesn’t like to be called ‘poor,’” she said.
“Frida has her dignity,” Bowie said. And then he grinned. Devastatingly.
Katie’s heart squeezed. A rush of sweet fire swept through her again, threatening to burn through her shields of self-preservation. She straightened before she did something very foolish, like trying to capture Bowie’s smile with a kiss.
“So, what’s the name of your camel?” she asked as she pushed back from Frida’s fence. “She always trots right over to me for a pet when I pass by on my way to watch the cougars.”
“That would be Lulubelle,” Bowie said as he led Katie around the corner. “She’s always been a little needy, and she’s been having a particularly hard time lately.”
Katie knitted her brow in concern as they approached Lulubelle and the llamas. “How so?”
“She’s lonely,” he said. “Ever since one of the llamas had a baby, Lulubelle has seemed to be longing for one of her own. Lou thinks she wants a mate too.”
“Awww,” Katie said as they approached the llama pen. Lulubelle instantly raised her large head and raced toward them. She thrust her neck at Bowie in clear demand. Katie swore that the animal sighed as he scratched the thick patch of fluff on top of her head. After thoroughly nuzzling him, Lulubelle turned her attention on Katie. Finding her line of vision full of insistent camel, Katie laughed and petted the old girl. When she dropped her hand and both she and Bowie began to turn, Lulubelle emitted a plaintive rumble.
“My goodness,” Katie said as she whirled back around. “It’sokay, Lulubelle. I’ll be back tomorrow.”
The camel made a raspberry sound in response. Bowie shook his head. “She’ll keep you here all evening if you’ll let her.”
“But that cry was awful!”
“I know,” he said as he ignored his own advice and rubbed the camel’s neck. “I wish we had the funds to purchase and take care of another camel or two. I’m hoping another zoo will at least lend me a stud.”
A thought struck Katie. She spun toward him, unable to stop her exuberance. “Bowie, I think I have a brilliant idea!”
He seemed to freeze. Too excited to pay much attention to his reaction, Katie spoke in a rush. “You can use Lulubelle as part of a fund drive.”
It took Bowie a second to respond. He stared at her for a long moment, then blinked hard. “Lulubelle?”
“Who can resist a lovelorn camel?” Katie asked. “I mean, look at her liquid-brown eyes and those ridiculous lashes. We could really sell her story of wanting a partner and a baby. There are so many sites on the internet where anyone can set up a fund-raiser. We could get people involved in the process of finding her a companion. Maybe you could pick a few candidates to be her mate, and the public could vote. We could even set jars outside the llama pen with pictures of potential boy camels, and visitors could cast their ballot by putting in cash!”
Bowie rubbed the back of his head, clearly considering her idea. “It could work, and it might bring in more foot traffic too.”
Katie nodded enthusiastically. She hadn’t been this excited in years about work. Her old boss had slowly killed her enthusiasm as he’d rejected idea after idea. It felt good to unleash her creativity on a receptive audience.
“Come on,” she said. “I want to see more of the zoo while I’m on a roll.”
Then, without thinking, she grabbed Bowie’s hand, tugging him forward. He chuckled—the sound once again low and this time even edged with surprising fondness. His fingers curled around the back of Katie’s hand, his body heat searing her. Instantly, she released her hold and kept her focus forward.
“Hurry up,” she said instead. “I don’t want to lose momentum. What’s next?” a Rafflecopter giveaway
at September 25, 2018