Fans of ménage romances will find themselves drawn to this tale of two friends who form a scorching connection to the neighbor next door in a healing journey to HEA.  Keep reading to get a tempting taste of Whiskey Sour by Nazarea Andrews, along with my impressions of it.  Once you’ve been fully tempted by this fourth installment in the River Street Bar series make sure to add this scorching tale to your bookshelf! 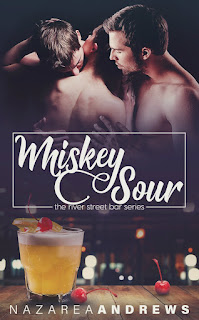 Calvin Landers is a mess.
He has a great job and a steady string of men and women in his bed, and has been in love with the same couple for so long he can't remember a time when he wasn't. Coming off fresh heartbreak, he's ready to move on, to give up on romance and sex altogether and moves in with his best friend, Davis, while he looks for something more permanent and tries to figure out what the hell he's doing with his life.
Ava Liu isn't looking for anything more than something to distract her from the book she's supposed to be translating. Something to distract her from why the hell she's in River City in the first place. But the boys who share a fence are more than a little distracting and pushy, when they realize just how much Ava needs someone--and how much they all need each other.
Sometimes life happens just when you stop looking. 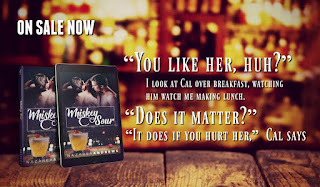 It’s a scorching tale of heartbreak, healing, and decadent delights found amongst the pages of this contemporary ménage romance that brings readers back to River City.  Friends become lovers while neighbors become even more in a tale that balances matters of the heart and the mind.  Familiar faces also show up to help this trio move past their pain to find happiness in each other’s arms while bringing a blush to your cheeks courtesy of erotically-charged encounters.

Cal’s a firefighter who was happy in his relationship with a married couple.  Even though it was a secret he was content in being a part of their lives and now feels lost after being dumped by them.  After wallowing in self-pity though he’s finally ready to move on and decides to do so with his best friend by his side.  The moment Davis moves in is the moment life changes irrevocably for him as well as his friend and new neighbor.  As the three of them form an unexpected connection, they’ll have to confront their pasts and the feelings that have been holding them back if they have any hope of making a future.  Cal’s a likable character who just wants to be loved.  Though his last relationship kept him as a dirty little secret, it was still satisfying enough for him as he just wants to belong to someone.  My heart broke for him when he was dumped, but I was still frustrated by him at times throughout this story as his fears had him holding back and hurting those who love him most.  With happiness staring him right in the face I desperately wanted him to grab for it much faster.

Davis has problems of his own too.  He has a stalker and decides that the invitation to move in with Cal thousands of miles away is the perfect solution to it.  Being in such close quarters with his best friend creates all sorts of new problems though as the feelings he’s had for him for years become a lot harder to keep hidden.  It’s a tentative dance the two of them engage in to become more than friends, a dance that gets interrupted the moment they meet their new neighbor.  Davis is immediately drawn to Ava, a woman with some serious issues, and it’s a gentle hand he lends her in friendship before moving on to more.  Davis seems like the glue that holds this trio together.  He was the one always willing to put his heart on the line and the one that brought all of them together and it made me like him all the more.

Ava’s a unique heroine with issues that made her a memorable heroine amongst all the ones I’ve read.  She suffers from agoraphobia and hasn’t left her house in years.  Her friend brings her the necessities of life, but it’s clear that she’s lonely and it fuels her scorching instantaneous connection to Davis.  They start out as friends but soon become more in a relationship that’s all-encompassing as Ava is fully accepting of Cal and Davis having a strong connection already which makes their menage even more believable.  Ava’s a likable heroine, one that I ached for as she had very low self-esteem and panic attacks over her past.  Being with the boys was a balm to her soul though and I cheered her becoming stronger in their presence.

This was an engaging read from the very first page to the last.  It was a scorching tale that beautifully balanced the healing power of love and friendship with interludes that set my tablet on fire.  Ava and Davis were the highlights for me, the ones most open to being together, while Cal‘s fears over again being the ”odd man out” had him holding back which dimmed my overall enjoyment. Along with this trio working through their emotional issues was a bit of suspense all set in a small town that reintroduces readers to characters from past books. I enjoyed the update on these characters and the sense of family their presence engendered.  On a whole this was a satisfying read with appealing characters that stands strongly on its own but it will quickly have you wanting to read the other books in this series too!

Nazarea Andrews (to almost everyone) is an avid reader and tends to write the stories she wants to read. Which means she writes everything from zombies and dystopia to contemporary love stories.
When not writing, she can most often be found driving her kids to practice and burning dinner while she reads, or binge watching TV shows on Netflix. N loves chocolate, wine, and coffee almost as much as she loves books, but not quite as much as she loves her kids.
N is a self-professed geek and enjoys spending her spare time lost in her favorite fandoms and can often be found babbling about them on social media.
She lives in south Georgia with her husband, daughters, spoiled cat and overgrown dog. She is the author of World Without End series, Neverland Found, Edge of the Falls, and The University of Branton Series. Stop by to see her on twitter and tell her what fantastic book she should read next.