Book Blitz for Demons Will Be Demons by A.E. Jones (GIVEAWAY)

Fans of paranormal romances rejoice with the release today of this exhilarating and suspenseful tale of a demon trying to convince the human he’s working with that she’s The One, while struggling to keep her safe.  Keep reading to get a tempting taste of Demons Will Be Demons by AE Jones, then add this fast-paced read to your bookshelf.  In honor of this first installment in The Realm series make sure to fill out the form below for the chance to win a $10 Amazon GC too! 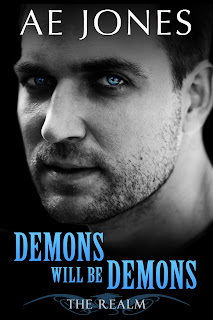 When missions go awry...
Misha Sokolov is one frustrated demon. While his professional life with the Bureau of Supernatural Relations is rewarding, his romantic prospects are the pits. His teammates Kyle and Jean Luc have found their mates (with his help, he might add). Is it too much to ask for his own happily-ever-after?
When Misha finally meets an amazing demon female who could be THE ONE, Fate conspires against him. With the escalating tensions between the earth and realm demons, and his newest case involving supernatural seven-year-old twin boys, he’s too busy for romance.
Callie, a human female, can’t seem to convince her half-demon sons that using their powers in front of humans is a bad thing. And the more time Misha spends with her, the more he realizes she’s keeping secrets. When those secrets jeopardize both her and her sons, Misha will stop at nothing to keep them safe. Because instead of conspiring against him, Fate may have put a spunky, green-eyed woman and her incorrigible sons in his path for a reason. 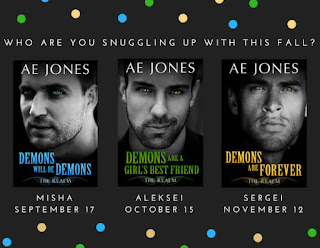 Paranormal romance and urban fantasy author AE Jones writes about all variation of supernatural—their angst and their humor. After all, life is about both…whether you sport fangs or not.
AE’s Mind Sweeper series is based in Cleveland and centers on a woman with the ability to erase memories. Her newest Realm series is based on stubbornly-sexy demon brothers.
AE has won several awards including RWA’s Golden Heart ® Award and the Booksellers Best Award. She has been a Holt Finalist and a Daphne du Maurier finalist. Her book Mind Sweeper was also an RWA RITA® finalist for both Best First Book and Best Paranormal Romance.
AE lives in Ohio surrounded by her eclectic family and friends who in no way resemble any characters in her books. Honest. Now her two cats are another story altogether.

a Rafflecopter giveaway
at September 17, 2018