It's a sizzling tale of steam and suspense as a battle is waged over a woman's heart in this paranormal romance of rivals set in the world of shifters.  Keep reading to get a tempting taste of Sin City Wolf: Howl by January Bain, and discover even more about this book by visiting the other sites hosting this tour, then add this book to your shelves while it's on sale for 99 cents.  In honor of this first installment in the Sin City Wolf series make sure to fill out the form below for the chance to win a $30 bookstore GC too! 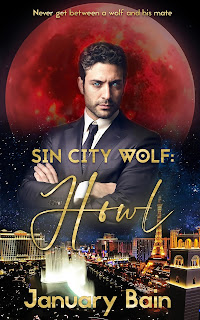 Never get between a wolf and his mate...
Billionaire. Casino owner. Tall, dark and deadly. Cristaldo Luceres is a potent force and a dangerous wolf to cross. Head of the House of Luceres, he’s used to fighting—literally—off any threat from rival houses. Wealth and women are his, but the one thing missing from his life is his mate.
Cristaldo’s on full alert when trouble comes to town in the beautiful shape of one Miss Everly Affini. The talented musician won a shot to play at the coveted Nero’s in Cristaldo’s Glittering Palace...and she could be the one, Cristaldo’s Forever Mate.
One problem is that she doesn’t think so—and isn’t shy about telling him—and another is that Rocco, an enforcer for the House of Ribelle, the Luceres’ sworn enemies, thinks she’s destined for him. Oh, and it’s the most powerful Super Blood Wolf Moon of the century, meaning chaos is unleashed.
Too bad. Once Cristaldo has a scent of his Forever Mate, he’ll fight for her...to the death if necessary. Everly doesn’t stand a chance.
EXCERPT:
Cristaldo
As Everly lost herself on stage, I clenched my hands into fists, claws digging into my palms. I fought the urge to transform, making the air around me shimmer in alarm. My eyes burned with the desire that would turn them incandescent and expose my wolf. Che diavolo sta succedendo? Never had I been affected like this. An alpha male always in control, was what I prided myself on being.
I couldn’t wait until after the concert, though the group had just begun their set. It had to happen now. My skin rippled visibly with the need. The only way to bring back control was to give in to the wolf. I left the auditorium and took the flight of stairs from the penthouse leading to the rooftop and my favorite toy, a Bell-Boeing 609 Tilt-Rotor straight from the factory in France. I jumped in behind the controls and set a course for our nearest compound in the desert. Ten minutes to freedom.
No sooner had I landed the helicopter—and with the blades still rotating—than I was out and running. Mid-stride, I entered another realm, a parallel existence, invisible from Earth, and my body underwent the change. On the other side, through the shimmering portal, the sensation deepened until all my cells had transformed, aligned in a new form. Then I was back in the present, a wolf. The world had mutated to an array of colors unknown to the human eye, blacks and browns and grays with subtle shadings that my brain converted to what my human side saw—blues and greens, yellow and reds. I breathed in deeply, my olfactory nerves sharpened by the cool, dry air of the desert at night. The odor of dust among the cactus, scrub and clumps of grass filled my nostrils.
I picked up the scent of fast game and gave chase. Bounding along, the wind to my back, twisting and turning as I easily followed my prey, I savored the strength of the wolf. My large paws ate up the distance, the shadows of the Joshua trees familiar forms mimicking humans and moving past me at lightning speed as I continued my pursuit.
The scent of fear ahead span my brain out of control. My prey knew I was close. I redoubled my efforts, imagining the takedown. The satisfaction. Then the creature found his burrow all of a sudden and went to ground. No matter. I streaked by the spot, needing the run far more than the catch.
The dry land slapped against my paws and the wind sliced across my muzzle. Time had no meaning in the desert. The longer I ran, the lighter I felt. Expending such energy increased my strength, mile by mile, each muscle quivering with adrenaline.
A new scent drew my attention. Wolf. I swung my massive head to the east. The interloper was not of the Luceres pack. My brain sharpened and the thrill of the chase intensified. I covered ground quickly, totally focused on the enemy. I needed this, to show the curs their place.
I raced to the farthest section of my land and confronted the Ribelle dog. My fur rose as my tail bushed out behind me. He was hellbent on getting away, circling back and forth like a prisoner in a cell, preferring to cross over the electric fence rather than face me. I snarled my disdain at finding the coward trying so desperately to escape.

AUTHOR INFO:
January Bain has wished on every falling star, every blown-out birthday candle, and every coin thrown in a fountain to be a storyteller. To share the tales of high adventure, mysteries, and full- blown thrillers she has dreamed of all her life. The story you now have in your hands is the compilation of a lot of things manifesting itself for this special series. Hundreds of hours spent researching the unusual and the mundane have come together to create books that features strong women who live life to the fullest, wild adventures full of twists and unforeseen turns, and hot complicated men who aren’t afraid to take risks. She can only hope her stories will capture your imagination.
If you are looking for January Bain, you can find her hard at work every morning without fail in her office with her furry baby, Ling Ling. And, of course, she’s married to the most romantic man! Who once famously remarked to her inquiry about buying fresh flowers for their home every week, “Give me one good reason why not?” Leaving her speechless and knocking her head against the proverbial wall for being so darn foolish. She loves flowers.
If you wish to connect in the virtual world she is easily found on Facebook. Oh, and she loves to talk books...
BLOG  |  TWITTER  |  FACEBOOK  |  GOODREADS AUTHOR PAGE
**********GIVEAWAY**********
a Rafflecopter giveaway
at March 04, 2021