Book Review for Fall Into the Sun by Val Kovalin 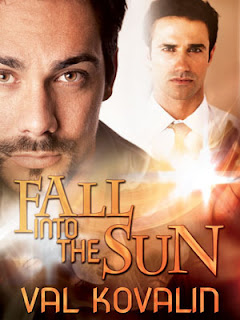 They should have spent the past 22 years together, but life took some unexpected turns for Bobby Gallegos and Alejo Sandoval. Heartbreak and rejection can harden the hearts of two passionate, stubborn men. One, deeply devout, wanted to attend college. One, who perfected a tough act to deceive his brothers, might have followed his dad to prison. Now, at 40 years old, they maintain a long-distance relationship as sex buddies, who don't quite trust each other.

Their lives have sharply diverged. One is now divorced with two teenagers, who bring him joy and despair. One has just had a near-death experience on the job. When Bobby returns to Albuquerque, he will use sex, persuasion, and memories of their shared past to try to convince Alejo to take a chance on him and reach for the future that they were meant to share together.

Val Kovalin has created an intensely emotional story greatly influenced by the movie Brokeback Mountain.  Not only is the movie mentioned often but the rollercoaster relationship between Alejo and Bobby is very reminiscent of the main characters from the movie.  Their love story has an epic feel to it as the reader is shown the first spark of their feelings for each other as youngsters through their turbulent teen years to their realizations that they're wasting the time they have left apart.  At every turn this story tugs at your heartstrings and even after the last page is turned, the lives of these two men stay with you.

Alejo had a difficult upbringing with brothers that were violent with numerous addictions.  He was mentally and physically abused and his unplanned coming out led to violence and him leaving town and never looking back to make a future for himself.  Being with Bobby gave him a sense of safety and feelings of being valued and loved.  In contrast, Bobby's family were loving but extremely religious so coming out was not an option for him so he tried to live his life as his religious beliefs warranted.  He treated Alejo as his dirty little secret, drawn to him yet never showing the truth in public.  These differences carried through the years as Alejo embraced what they had while Bobby fought things every step of the way but ultimately coming back every time.  I felt sympathetic towards Alejo throughout the entire story.  Coming from the background he did of constantly having to clean up his family's messes to desperately wanting to be acknowledged by the only man he truly loved and constantly being kept a secret made me resent Bobby at times for his unknowingly callous treatment of Alejo.  Bobby was a coward when it came to matters of the heart and his religion definitely kept him shackled to his life built on lies.

Alejo and Bobby's early sexual interludes were fumbling yet sweet.  As they matured and with each encounter being but for a fleeting moment there was always a sense of longing and desperation in the intensity of their coming together.  These interludes, once they ended, made me ache for what they could have if Bobby only let himself be happy.

The Mexican culture is beautifully on display with its beliefs and expectations of of how a man should act greatly affecting both Bobby and Alejo.  The descriptions of the city and culture fully immersed the reader in the story and added an extra layer to the story.  There's an intriguing number of secondary characters that greatly influenced the relationship between Bobby and Alejo with many of them appealing and one or two extremely exasperating.

This was a wonderful story that pulls you in from the very first page and stays with you long after the final page is turned.  Every up and down these two men experienced, I felt right along with them.  Readers wanting a realistic story full of rollercoaster emotions should definitely give Fall Into the Sun a try.

*I received this book from the author in exchange for my honest opinion.
at June 03, 2012