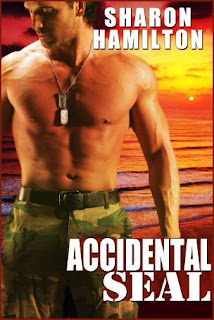 Christy Nelson embarks on her new career in Real Estate by holding her first open house. Entering the wrong house, by accident, she finds the nude sleeping body of a young man.

Navy SEAL Kyle Lansdowne, on a mission to find his AWOL Team buddy, is staying at his buddy’s home while investigating the disappearance. When someone breaks in, he takes protective measures. He doesn’t expect to find that a beautiful young woman is responsible for his teammate’s abduction.

What starts out as a meeting by accident becomes a hot affair neither one is ready for. Kyle is conflicted about getting Christy involved in his mission, but his hand is forced when he learns the same San Diego gang responsible for his teammate’s abduction has kidnapped her.

Battling a cadre of dirty law enforcements hell-bent on getting military equipment, especially state-of-the-art firepower, Kyle is forced to admit that he would die to protect her.

With the heat of summer upon us, Sharon Hamilton's Accidental SEAL cranks up the heat even more through its edge of your seat suspense and intensely sexual connection between the main characters of Kyle and Christy.  Not only do we get to meet such a strong primary couple, but the secondary characters are equally intriguing and as SEALs are super strong and charming.

Christy and Kyle meet in a very memorable way and from there their relationship evolves very quickly.  Christy's a strong and likable character who's capable of protecting herself.  Upon meeting Kyle her life is turned upside down and not only has she found the one man she wants to love, but her life is now in danger from those sworn to protect.  Christy's no shrinking violet and plays an active role in bringing the bad guys to justice which endears her to all the SEALs.  Kyle's extremely loyal to his friends and would die for them if need be, but is incapable of admitting his true feelings towards Christy.  As he fights to find his missing friend and fellow SEAL, he almost loses Christy and can't deny his feelings anymore which leads to a perfectly tied up and satisfying conclusion.

The mystery surrounding the bad guys gets a bit pushed to the side in relation to the sexual interludes, which are frequent and scorching.  The bad guys make for some bloody encounters and pulse pounding action sequences.  This gives Kyle's fellow SEALs a chance to shine and set themselves apart for future installments.

From beginning to end I found this to be an enjoyable story with intriguing characters and lots of sweaty sexual interludes.  This premise and the sense of family amongst the SEALs, has me excited to revisit this world and the characters that were enticingly introduced.  This is one series that will become an auto-buy for me and one I think others will enjoy too.

*I received this book from the author in exchange for my honest opinion.
at June 28, 2012