Review for Hounded by Sadie Hart 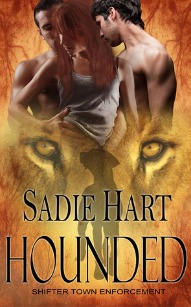 Lion-shifters Kanon Reyes and Tegan Sharpe aren’t sure what Kanon’s done to earn himself a frame-up for murder, but they’re determined to keep him from a silver bullet and a shallow grave. To do that, though, they’ll have to rely on the sexy Hound sent to arrest him.

As a Hound for Shifter Town Enforcement, Lennox Donnelly is one of the best. But when one of her arrest warrants turns out to be for an innocent man, she’s determined to get to the truth. What she finds are dead witnesses and an untraceable magick–with a killer far more powerful than her.

Now, to survive, Lennox will have to learn to rely on more than just herself if she’s to make it back to the men she’s come to love.

Just when you think there's no new themes possible in the paranormal genre there comes a book with just enough of a twist to set it apart from the rest.  The premise of Hounded has some familiar qualities as well as some fresh ones that kept me entertained from the very start to the edge of your seat culmination.

Hounded introduces us to the world of shifters where lions, snakes, wolves, and hounds among other species try to live harmoniously even though deep prejudices still exist.  Into this powder keg of prejudice and mistrust, particularly between hounds and lions, comes a madman bent on revenge against all lions who sets up lion-shifter Kanon Reyes for a string of murders.  It's up to Kanon's lover/mate Tegan Sharpe and Lennox Donnelly, the rhodesian ridgeback hound assigned to the case, to find out the truth before death claims them all and a shifter war erupts that could lead to untold death.

This story was full of suspense and action that easily kept me on the edge of my seat, as well as guessing for quite a while who the bad guy was.  The pace of the story moved along nicely with only one or two parts that felt a bit draggy, but nothing that didn't keep me turning the pages in anticipation.  The sexual chemistry between Kanon, Tegan, and Lennox was palpable from the start and the existing relationship between Kanon and Tegan easily and believably transitioned to include Lennox.  The sexual interludes were nicely spaced throughout the story with both m/m and m/f/m scenes with just the right amount of spice to make this reader flush.  Kanon and Tegan are both sexy and charming with Tegan the more in control of his actions with both of them bringing something unique to their relationship.  They're both powerful but quite willing to let Lennox take control in a crisis because of her unique and powerful law enforcement talents that has made her the best of the best.  Lennox is a kickass heroine who's smart, yet serious, and more than capable of bringing criminals to justice.  She easily goes toe to toe with the villain in a very bloody encounter towards the end of the story that was very impressive in its brute strength.  Kanon and Tegan brought laughter to Lennox who lived for her job before meeting them and is why this menage feels believable.  They each bring something unique to their group and meet needs the others didn't even know they had.  There's a give and take between them that brings them closer together that can't be found when they're apart.

I enjoyed the unique spin on the variety of shifters in this world.  For the hounds there were rhodesian ridgebacks, bloodhounds, and salukis with each species having unique abilities so in a fight who knows who'd win.  This sets it apart from the usual shifter stories and has me excited for whatever else Ms. Hart has up her sleeve.  Fans of the paranormal can join me in welcoming Hounded to the neighborhood and it's with bated breath that I'm counting down the days until we can revisit this world.

*I received this book from the author in exchange for my honest opinion.
at June 17, 2012