Review for The Gift by VS Morgan 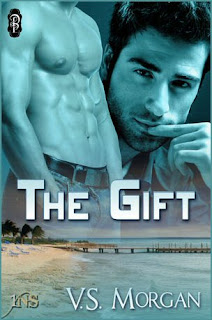 At 22, rancher Wyatt Malone sacrificed almost everything, including the Dom he served and loved, to raise his younger brothers. Now, with the ranch running well, his grown up siblings surprise him with a trip to a Caribbean paradise and a date from Madame Evangeline's 1Night Stand. Taking his courage in hand, he fills out an application that bares his soul for a single night of surrender to a nearly forgotten passion.

Rafael is a Dom without a sub. His desires exceed the available men in the dungeon he frequents and memories of rejected love keep him aloof. Can the submission of a Montana cowboy free him or will the date be nothing more than another meaningless scene?

In the immortal words of Forrest Gump, "Life is like a box of chocolates, you never know what you're going to get."  Well in the case of Decadent Publishing's 1 Night Stand Series, you know with each read that you'll get a highly emotional story that gets right to the sexy heart of the story.  And just like the addictive quality of chocolate, once you read one story you'll want to try another.

The Gift is a story about sacrificing love and happiness for family and with the character of Wyatt setting aside his life to take care of his siblings and family farm after the death of his parents, that point is profoundly heartwrenching.  Thanks to his brothers and the services of Madame Evangeline's 1 Night Stand, Wyatt's unexpectedly reunited with his former Dom and the man who still holds his heart, Rafael.  After a night where all his burdens are taken away, Wyatt again prepares himself to let go of Rafael.  Maybe this time he'll decide that he's better off sharing his burdens rather than doing everything on his own?

This story relies on the perceived preexisting connection between Wyatt and Rafael.  This leads to a rather superficial view of these men but allows the action to get underway quite quickly.  For a Dom/Sub story it's very lite on the BDSM elements.  Considering how sought after Rafael is within the community, I expected someone much more domineering.  Rafael was very gentle though and showed a very emotional side when he was with Wyatt.  I liked how he took care of the hard working, self-sacrificing Wyatt, but was disappointed he didn't live up to his reputation.  He and Wyatt were a sexy team and the romantic gestures made by each spoke louder than words as to their real feelings and made for a sweet, perfectly tied with a bow, ending.

This was a pleasantly written afternoon interlude that like Calgon, takes you away from it all.  The characters are enjoyable and the author's writing style makes for a nicely flowing story.  I wish there'd been more substance to the characters to fully immerse me in this dream-like story, but there's great promise in this story that has me intrigued to read more from this author.

*I received this book from the author in exchange for my honest opinion.
at June 10, 2012