Book Tour for The Secret Library Series from Xcite Publishing

Is everyone ready? Egy, kettő, három!

I've been having these bursts since I was thirteen and developed a fascination with the composer and super-virtuoso, Franz Liszt, who wrote the Hungarian Rhapsodies from which my title is taken. The music was so joyous and summery and free-spirited that it made me want to find out more about my idol's homeland, so I bought myself a guide book and a dictionary and started listening to short wave radio broadcasts in Hungarian.

There was a problem with this, though – Hungarian is really, really, (really) difficult. There are, for example, up to eighteen different noun cases. It is unlike any other European language, though it has a distant relative in Finnish. Words change meaning according to the prefixes, suffixes or postpositions attached to them.

So the language defeated me (comfortingly, Liszt couldn't speak a word of it either), but it didn't stop me continuing to study and embrace the country's history and culture, and I've poured a lot of what I've so lovingly learned into my story. I hope it seduces you, just as Hungary seduced me. 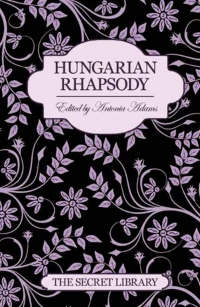 The Secret Library is a new range from Xcite Books which will appeal to the female romance reader market. Each book contains three specially commissioned novellas guaranteeing a satisfying and varied selection.

The story content is relationship led with a strong alpha male hero, a level of conflict and a climactic, explicit ending.

The covers are deliberately designed without visual imagery to be discreet. These books could be comfortably read in public, given as gifts and left on a bedside table.

*To learn more about this series of books visit the other blogs hosting this tour listed here.
at June 15, 2012